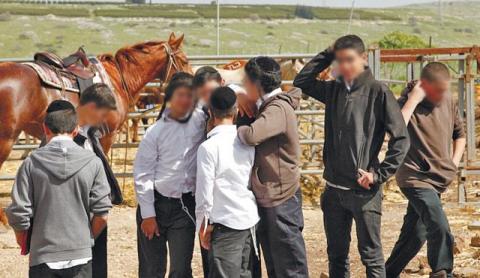 Most ultra-Orthodox authorities denounce the study of secular subjects, but at an ORT vocational school in the rural Galilee, Haredi teens are combining Torah study with learning a trade. Just don't tell anyone.

There is no hint outside the Kfar Zeitim yeshiva that this site houses an educational institution for 95 ultra-Orthodox teenage boys. In fact, a sign proclaiming "ORT Torah Center – Yeshiva Kfar Zeitim" was just erected, three years after the facility opened, and even that sign is visible only after walking past the guarded gate of the complex.

The very existence of such an institution – one of four run by the ORT vocational school network – is a sensitive issue. The staff members were reluctant to cooperate with TheMarker until it became clear that this news outlet does not exactly have a large ultra-Orthodox readership. Still, there were arguments about what could and could not be disclosed during this visit with ORT director general Zvi Peleg. For instance, staffers were reluctant to reveal the fact that these Haredi boys study – hold your breath – civics.

Walking on eggshells is the name of the game at the Kfar Zeitim Torah Center and two similar yeshivas established by ORT over the past three years. No senior religious authority has recognized the study centers, but then again no one has raised any official objections about them either. A shroud of silence surrounds the existence of these special yeshivas, tacitly approved by the rabbis.

The student body is composed almost exclusively of Haredi youth, aged 14 to 18, who dropped out of regular yeshivas. That's an estimated 10% to 25% of the yeshiva population. The students usually come from broken homes or have various learning disabilities. Since the Haredi world offers only two options – studying in a yeshiva or being tossed onto the street – the need arose for a solution for those who don't fit into the standard yeshiva framework. The ORT yeshivas -- which combine religious studies with secular subjects, like English, Hebrew, math, and civics, along with vocational training in either carpentry, computers, or electronics -- offer a new alternative.

The 95 teenage boys studying at Kfar Zeitim live four to a room on this farm that doubles as a yeshiva. The students converted the sheep pen into electronics and computer labs and a carpentry shop. The breathtaking view towards Mount Arbel can be enjoyed from a huge, wooden veranda – also hand-built by the students.

There is also a large stable housing 12 horses, enabling students to have at least one therapeutic riding lesson a week. There are also music and drama lessons and a fitness room. The students come from all over the country. Most say they chose the remote Kfar Zeitim because it was the only framework allowing them to combine yeshiva studies with learning a profession. The choices offered – carpentry, computers, and electrical training – will enable them to run small shops and businesses.

"They can be electricians or carpenters and make a living by serving the population in Bnei Brak [the ultra-Orthodox neighborhood near Tel Aviv]," says Peleg. "At the end of their studies, they are meant to return to their communities and [continue] yeshiva studies. The intention is to enable them to make a living from a trade suitable to the needs of the Haredi public and also allow them …to combine work with yeshiva studies." Peleg repeatedly points out that the youth studying at Kfar Zeitim haven't abandoned religion or the Haredi lifestyle. Military service is an especially sensitive issue.

"We don't encourage them to go into the regular army," Peleg says, "since it isn't natural for Haredi youth. Our goal isn't army service but integration into the life cycle and giving these young men the chance to support a family. We won't initiate anything that could distance them from the Haredi lifestyle."

Nevertheless, most of the first set of graduates joined the army's Nahal Haredi program, and two also went on to become paratroopers. For the teaching staff, this is a fact that is best left unmentioned.

The fact that ORT, a secular Zionist education, is running schools whose existence goes unacknowledged – without even a signpost until now – is, in Peleg's view, a small price to pay.

"This is a way to generate change in Haredi society – quietly and from the bottom," he says. "Our three yeshivas could put out 600 graduates a year, all of them agents of change. They will return to their communities, to the sudden discovery that they're not such bad marriage prospects after all – since they keep a Haredi lifestyle and can also support themselves. This is the way to transmit the message that learning a trade is something good. It's a foot in the door," says Peleg.

But for now, this solution is tolerated only for the drop-outs. Most Haredi youth won't study anywhere but a full-fledged yeshiva. And even this limited program for a small population must stay out of the limelight, with no mention of civics studies or army service. That's the only way the rabbis are willing to go along with it.

But that's enough for Peleg. He believes that this modest beginning could snowball into a change in the entire Haredi society. As long as it's kept under wraps.

"The moment the rabbis say it's forbidden, it will all end," he says, "even if it means the boys and their families starve."