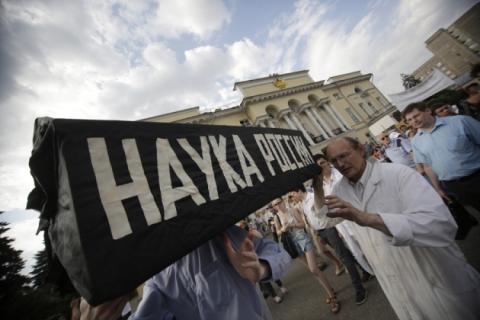 Even before the slide bearing a portrait of Joseph Stalin appeared, the mood at a St Petersburg meeting on the future of Russian science was tense. But when Andrei Starinets, an expatriate theoretical physicist now at the University of Oxford, UK, used the former dictator’s image to reinforce a call for Russia to lead the way in science — and to ask his fellow émigrés to stand united in “turbulent political times” — tempers exploded.

“I’m not going to take this anymore,” shouted Alexey Kondrashov, an expatriate geneticist at the University of Michigan in Ann Arbor. Seething with rage, he jostled his way out of the room and slammed the door behind him.

After Russia’s annexation of the Crimea earlier this year and the violent separatism that threatens to tear apart the rest of Ukraine, Starinets’ reference to Stalin — whose actions led to the exile and deaths of millions in the gulag system in the first half of the twentieth century — was provocative. But heated debate bubbled up frequently at the meeting, which was convened on 5–6 December by the private European University at Saint Petersburg.

The geopolitical situation has not yet severely hurt collaborations such as the International Space Station or the ITER fusion reactor that is being built in France. But the gathering, which brought together 100 or so expatriate and resident Russian scientists, as well as government officials, revealed deep divides.

There are those like Starinets, who are staunchly loyal to Russian President Vladimir Putin and think that Russian science can restore its strengths by going it alone. And there are those like Kondrashov, who are deeply worried that their country’s recent actions in Ukraine and its weak democracy at home are making Russia an unpleasant place to do science and are driving away scientists, whether they come from Russia or elsewhere.

“Any discussion about the future of Russian science is pretty much pointless when this country behaves like a bull,” said Kondrashov shortly after he stormed out of the meeting. “I love Russia, but the outlook for science here is gloomy and I’m very concerned about where that country is going.”

One goal of the meeting was to devise ways to restore Russian science. The Soviet Union was a scientific powerhouse, but Russian science is still struggling to recover from its near-collapse in the 1990s, and its output lags behind that of rivals such as China (see ‘Widening gap’). Although Russia has kept its strengths in mathematics and some areas of physics, it trails other large nations in the life sciences.

Tensions at the St Petersburg meeting ran high from the start. On day one, scientists lobbed complaints at Andrei Fursenko, a leading science adviser to the president and one of several close Putin allies on whom the US government imposed sanctions in the spring in response to Russia’s actions in Ukraine.

“Do you have a vision for the future of science in this country?” shouted one researcher at Fursenko. “Will we have a say?” another demanded. In part, they were referring to a leaked letter sent by Fursenko to Putin in June, which proposed areas of research to be prioritized for science — and bearing a handwritten “I agree”, apparently from Putin. Many scientists saw that letter as a sign that science policy is being decided behind closed doors, without researchers being consulted.

Meeting attendees also complained to Fursenko about a 2013 reform that put the Russian Academy of Sciences (RAS) under the control of a federal agency that reports directly to Putin. “We are always open about our vision,” replied Fursenko. He added that Russian scientists have a negative attitude towards their government, and he made a promise to increase support for “the best Russian labs” — a sentiment that earned some applause.

Another goal of the meeting was to formulate plans to stem an alarming brain drain from Russia. “Students and intellectuals are fleeing this country,” said Mikhail Gelfand, deputy director of the RAS Institute for Information Transmission Problems in Moscow. One of those is Sergei Guriev, a prominent economist who was a speaker at a similar meeting held four years ago, and who fled Russia over fears about government repressions.

The loss of scientists is not new for Russia: over the past quarter of a century, an estimated 30,000 have migrated to the West and only a few hundred have returned. But many think that the government’s current stance is making things worse.

And although there have been positive consequences of this migration for Russia — mainly the links that grow up between Russian and Western labs as a result — there are signs that these links are under strain. “Most of us grew up, studied, and launched our careers in Russia and later benefited from support and political stability in the West,” says Valery Yakubovich, a sociologist and management scholar at the ESSEC business school in Cergy-Pontoise, France. “Maintaining connections is getting more difficult, but even more important in these turbulent times.”

At the meeting there were suggestions that the political climate in Russia is interfering with attempts to lure foreign scientists to work there, and to encourage expatriates to return. In 2010, the government launched a ‘mega-grant’ programme worth 12 billion roubles (US$428 million at the time) to attract scientists from abroad to do research at Russian universities.

But “why would anyone who lives a decent life abroad decide to do science in Russia at a time when fear and intimidation interfere with everything in this country?” asked Maxim Frank-Kamenetskii, a biomedical engineer at the University of Boston in Massachusetts. He fears that Russia risks falling back to Soviet-era scientific isolation.

Some say that the way to reverse the brain drain is to change things from within. Gelfand has previously joined Moscow rallies of young Russian scientists and members of the RAS. He called on scientists to have the “moral courage” to create a political environment in which science can flourish. “With a more pronounced civic stance, many bad things here might not happen,” he told the meeting.

But not everyone there saw discussion of politics as fruitful. Elena Grigorenko, an epidemiologist at the Yale Child Study Center in New Haven, Connecticut, and one of only four women who succeeded in the competition for the mega-grants, chose not to discuss politics. “I’m a Russian citizen and I do care about politics, but it’s my choice when to express my opinions,” she said.

And at least one émigré sees the political situation in Russia as a reason to return. Artem Oganov, a Moscow-born computational materials designer formerly at the State University of New York at Stony Brook, relocated to the Russian capital this month. He will take up a faculty position at the Skolkovo Institute of Science and Technology (Skoltech), an English-language research university that was set up in 2011 in partnership with the Massachusetts Institute of Technology in Cambridge. Oganov is keen to help Russia to restore its science output.

“I’m not a refugee, nobody treated me badly, and I am perfectly at peace with my country,” he says. “I do worry about the sanctions and the growing economic problems here, but I could never forgive myself if Russia needed me and I was not there.”