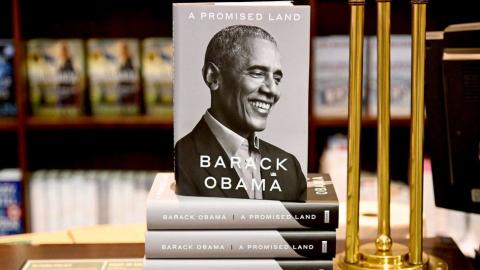 Former US president Barack Obama called Prime Minister Benjamin Netanyahu a “fascinating character” in an interview published Monday, saying that he included extensive context about Israel and Netanyahu in his upcoming memoir to make readers better understand the deep differences in worldview between them.

In a lengthy interview with The Atlantic editor-in-chief Jeffrey Goldberg, Obama spoke primarily about US politics and the first few years of his presidency — topics covered in his memoir “The Promised Land,” which comes out Tuesday.

Most foreign policy issues encountered by Obama during his eight years as president are reserved for a follow-up book to be published in the future. However, the interview briefly touched on sections of the book focusing on Israel and Netanyahu, as well as Russian President Vladimir Putin.

Goldberg asked about the way Obama wrote about Netanyahu and “other people you don’t like.” “I thought you were calibrating in your writing about Bibi, and [Republican Senate Majority Leader Mitch] McConnell, and some others, and doing so much extra contextualization,” Goldberg said, using Netanyahu’s nickname.

“It’s not a secret that Netanyahu and I did not share worldviews,” Obama answered. “The same with McConnell. But I think Bibi is a fascinating character the same way that Putin is a fascinating character. I think you can’t understand them, or Russia or Israel, without looking at the history out of which they arose, what shaped them. Providing that sense of context is not actually a matter of me trying to engage in political calculation.”

“I want the reader not to just simply say that this guy and Obama are antagonistic, and since I’m reading Obama’s book I’m siding with him and the other guy must be a complete jerk,” he said. “I want someone to read this and say, I understand how it is that the Israelis, given the world they are in, given the history they have experienced, and given the genuine threats that surround them, can turn to a figure who represents strength of a very particular kind and why that might clash with Obama’s views about certain things.

“My hope is that there is going to be some young future politician in Israel who is reading this book and is reading for this context and sees that I’m paying attention to this context.” In the memoir Obama describes Netanyahu as “smart, canny, tough and a gifted communicator,” who used his knowledge of American politics and the media to resist White House policies he disagreed with.

Obama writes that Netanyahu’s “vision of himself as the chief defender of the Jewish people against calamity allowed him to justify almost anything that would keep him in power,” according to excerpts published last week by Jewish Insider.

The 44th US president recalls being told by Rahm Emanuel, his first chief of staff, as he took office that “you don’t get progress on peace when the American president and the Israeli prime minister come from different political backgrounds.” Obama says he began to understand Emanuel’s insight after spending time with both Netanyahu and Palestinian Authority President Mahmoud Abbas.

Regarding AIPAC, the pro-Israel lobbying group, Obama charges that its positions moved rightward in accordance with the political shift in Israel, “even when Israel took actions that were contrary to US policy.” He laments that politicians who “criticized Israel policy too loudly risked being tagged as ‘anti-Israel’ (and possibly anti-Semitic) and [were] confronted with a well-funded opponent in the next election.”

In the book, a copy of which was seen by The Times of Israel, Obama also reveals that in a 2009 meeting with then Saudi king Abdullah, he pushed for Riyadh and other members of the Arab League to “consider a gesture to Israel that might help jump-start peace talks with Palestinians,” but received “noncommittal” response.

In recent months, Obama administration officials working on the Biden campaign have insisted that while the recent normalization agreements brokered by the Trump White House are positive developments, the groundwork for them had been laid before the current president took office, including by his predecessor.

The publication of the excerpts relating to Israel in the book come after other news outlets put out fragments concerning Obama’s successor Donald Trump, whom he accuses in the memoir of fomenting racial “panic” for political gain.

He also writes that his election to the White House played a role in Trump’s rise to power by stoking racial discord, and that the divisions in American “run deep.” Trump’s departure will not be enough to bridge the divide, he says.