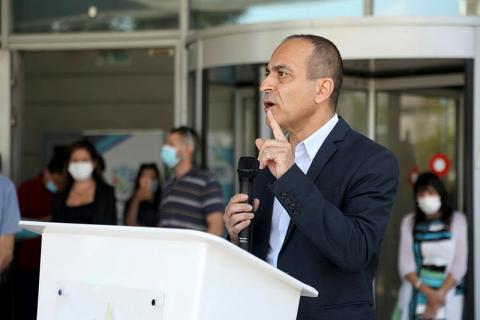 Ahead of a possible lockdown amid record coronavirus infections, at more than 3,000 newly confirmed cases on Wednesday alone, the corona cabinet is expected to convene Thursday morning for a critical discussion on the matter.

Among the proposals likely to be presented by Prof. Ronni Gamzu, the head of the national campaign against the coronavirus pandemic: Extending the shutdown period for schools in so-called "red" cities with particularly high infection rates and restricting freedom of movement in those cities, possibly imposing nightly curfews, closing businesses and even full quarantine.

Gamzu's "traffic light" system, which classifies cities, towns, and local authorities as red, orange, yellow, or green depending on their COVID numbers and can be used as a tool to help authorities decide what measures to take to stem outbreaks and what, if any, localized public health restrictions should be instituted, was approved by the Corona cabinet and will take effect on Sept. 6.

The corona cabinet will also seek to expand the list of 23 "red" cities to include, among others, the ultra-Orthodox cities of Bnei Brak and Elad. In recent days, the Haredi sector has seen an infection spike and certain neighborhoods in "yellow" cities – Ashdod, Jerusalem and Beit Shemesh – are on the brink of being designated "red."

"Barring a significant change in the scope of morbidity in red cities, we cannot avoid a full lockdown," Gamzu warned Wednesday during a visit to the Haredi town of Beitar Ilit, where despite its designation as a "red" city, municipal leaders decided to open schools in contravention of safety directives.

"To our regret, we are seeing a deliberate violation of the safety directives," Gamzu told members of Beitar Ilit's city council. "Events are being held throughout the city every evening in violation of the directives and [Tuesday], too, contrary to our instructions, the city's schools were opened. I understand the complexity of the situation, but am now telling you unequivocally – without increasing enforcement and encouraging testing, we will have to make complicated decisions that could end in a total quarantine."

"The consistent refusal to cooperate from some of the red cities could result in a devastating outbreak. A significant increase in morbidity rates will obligate us to take harsh measures, even on the national level. Barring any discernable change by the stipulated deadline of September 10, we will have to formulate new and more expansive directives that will significantly impinge on daily life – beyond red cities as well," Gamzu warned.