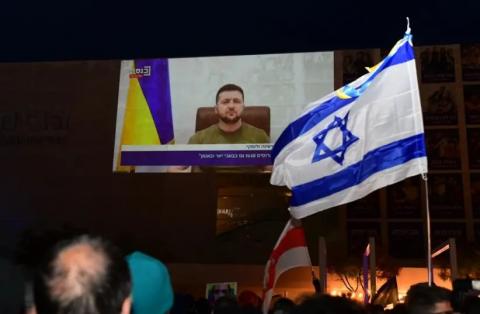 A Foreign Ministry statement saying that Israel “recognizes the territorial integrity and sovereignty of Ukraine, and will not recognize the results of the referendums in its eastern districts,” is a welcome recognition of what should have been self-evident. Russian President Vladimir Putin’s attempt to tear away more of Ukraine’s sovereign territory in the Donetsk, Luhansk, Zaporizhzhia and Kherson districts through military conquest and staged referendums (which took place this week) deserves condemnation.

The Israeli statement is noteworthy given its paucity of official condemnations since Russia invaded Ukraine eight months ago, and to some extent, it’s a correction of Israel’s refusal to join the West’s denunciation of Russia’s annexation of the Crimean Peninsula in 2014. Nevertheless, it’s too little, too late. The laconic statement didn’t even mention Russia by name.

Israel’s ongoing fear of explicitly condemning Russia’s actions and of standing clearly with Ukraine is even more bewildering in light of Russia’s ongoing weakness both militarily – it has retreated on most fronts in recent weeks – and diplomatically. At a recent summit in Samarkand, Putin failed to gain support even from Russian allies such as China.

The cool reactions from China, India and Turkey to the fabricated referendum results also indicate a change in their attitude toward Putin’s thuggish behavior. “Such illegitimate faits accomplis will not be recognized by the international community,” the Turkish Foreign Ministry said in a statement, adding, “we renew our support for Ukraine’s territorial integrity, independence and sovereignty.”

The excuses Israeli leaders routinely make about Russia’s presence in Syria and the need to protect the Russian Jewish community have lost their power as well. After all, Russia’s difficult situation on the Ukrainian front has led it to further reduce its already small force in Syria, and the outrage of ethnic minorities in Russia over the Kremlin’s call-up of reservists is currently demanding all of Moscow’s attention.

Israel’s ongoing refusal to help Ukraine, which is fighting for its independence, is a moral blot, and its agreement to accept 20 wounded Ukrainian soldiers for treatment at Israeli hospitals cannot erase it.

Ukrainian President Volodymyr Zelenskyy, an outspoken supporter of Israel, addressed this issue in an interview last week. “I’m shocked,” he said. “I don’t know what happened to Israel. Israel gave us nothing, nothing, zero.” He is right.