Population benefits of sexual selection explain the existence of males 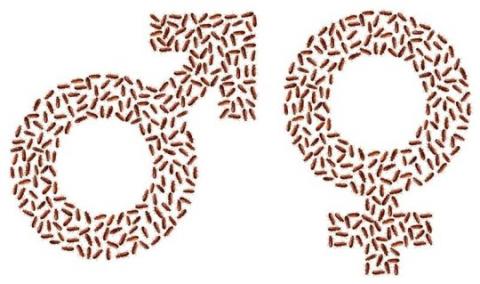 New research from the University of East Anglia shows that an evolutionary force known as 'sexual selection' can explain the persistence of sex as a dominant mechanism for reproducing offspring.

Biologists have long puzzled about how evolutionary selection, known for its ruthless requirement for efficiency, allows the existence of males -- when in so many species their only contribution to reproduction are spermatozoa. But research published today in Nature shows that sexual selection -- when males compete and females choose over reproduction -- improves population health and protects against extinction, even in the face of genetic stress from high levels of inbreeding.

The findings help explain why sex persists as a dominant mechanism for reproducing offspring. Lead researcher Prof Matt Gage, from UEA's School of Biological Sciences, said: "Sexual selection was Darwin's second great idea, explaining the evolution of a fascinating array of sights, sounds and smells that help in the struggle to reproduce -- sometimes at the expense of survival.

"Sexual selection operates when males compete for reproduction and females choose, and the existence of two different sexes encourages these processes. It ultimately dictates who gets to reproduce their genes into the next generation -- so it's a widespread and very powerful evolutionary force. "Almost all multicellular species on earth reproduce using sex, but its existence isn't easy to explain because sex carries big burdens, the most obvious of which is that only half of your offspring -- daughters -- will actually produce offspring. Why should any species waste all that effort on sons?

"We wanted to understand how Darwinian selection can allow this widespread and seemingly wasteful reproductive system to persist, when a system where all individuals produce offspring without sex -- as in all-female asexual populations -- would be a far more effective route to reproduce greater numbers of offspring. "Our research shows that competition among males for reproduction provides a really important benefit, because it improves the genetic health of populations. Sexual selection achieves this by acting as a filter to remove harmful genetic mutations, helping populations to flourish and avoid extinction in the long-term."

After seven years of reproduction under these conditions, representing about 50 generations, the study exposed the underlying genetic health of the resulting populations. The team used experimental inbreeding to reveal the relative amount of deleterious mutations that lay hidden in each population. They found that populations that had previously experienced strong sexual selection maintained higher fitness and were resilient to extinction in the face of inbreeding -- with some populations surviving even after 20 inbreeding generations where a brother was mated with a sister in each generation.

However populations that had experienced weak or non-existent sexual selection showed more rapid declines in health under inbreeding -- and all went extinct by the 10th generation. Prof Gage said: "These results show that sexual selection is important for population health and persistence, because it helps to purge negative and maintain positive genetic variation in a population. "To be good at out-competing rivals and attracting partners in the struggle to reproduce, an individual has to be good at most things, so sexual selection provides an important and effective filter to maintain and improve population genetic health.

"Our findings provide direct support for the idea that sex persists as a dominant mode of reproduction because it allows sexual selection to provide these important genetic benefits. "In the absence of sex, populations accumulate deleterious mutations through a ratcheting effect where each new mutation takes a population closer to extinction. Sexual selection helps to remove those mutations, enabling populations to persist against the threat of extinction.

"Our monogamous treatment, for example, where there was no sexual selection for 50 generations, resulted in a lower level of population health and rapid extinction when populations were challenged by inbreeding. All the populations derived from monogamous histories became extinct after just eight generations. "By contrast, populations derived from the same ancestors and identical apart from having the opportunity for male competition and female choice at each adult stage, maintained population health and avoided extinction, with some family lines still reproducing happily even after 20 generations of inbreeding."

This research was funded by the Natural Environment Research Council, the Leverhulme Trust and the University of East Anglia.