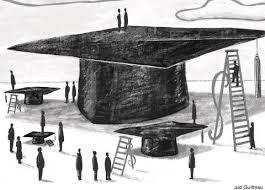 High school students from Israel’s geographic periphery score worse on math bagrut matriculation exams and earn lower salaries when they join the workforce than their counterparts in the center of the country, according to a new study by the Shoresh Institution for Socioeconomic Research.

The study, authored by Prof. Dan Ben-David and Prof. Ayal Kimhi, seeks to identify the educational basis for the discrepancy in pay. They looked at the entire Israeli population born over an eight-year span, taking into account around 100 distinct characteristics such as economic status and location, in order to isolate the educational variable’s effect on salary later in life.

They found that the factor most likely to affect a student’s future wages was the level of mathematics studied for the matriculation exam, with students who studied more advanced math − “more bagrut units” in Israeli parlance − earning more than those who pursued less difficult math studies.

“Math is a language, just like you need Hebrew and you need English to get around in different environments,” Ben-David, who is president of the Shoresh Institution and an economist at Tel Aviv University, told The Media Line. “In an increasingly technologically oriented world, that’s the language that you need, apparently more than any other.”

The authors’ research looks at the wages of those who were born between 1978 and 1985 and those who became Israeli citizens before the age of 17, who worked at least one month a year in 2012-2016.

Approximately the same proportion of students in the central region and in periphery took the hardest level matriculation exam. Math is a language. In an increasingly technologically oriented world, that’s the language that you need, apparently more than any other

The discrepancy, Ben-David says, is the result of inferior education in the periphery. “The difference is the quality of their studies,” he says. “It’s not that the kids in the center study at higher levels, per se, but at the higher levels, they study more and better.” Ben-David contends that the lower quality studies stem from elementary schools that are inferior to those in the center, which also feeds into the high schools. He attributes this to the lower average socioeconomic status of people in the periphery and the difficulty in attracting good teachers, who prefer positions in the central region.

This is demonstrated by the gap in matriculation exam achievement, with 33% of students in the periphery scoring between 91 and 100 on the math exam, compared to 43% in the center. Ben-David also says that it is up to the government of Israel, which funds schooling, to fix the educational inequities. “If you want to narrow gaps between various parts of the country, then you have to give more resources… to places where… kids’ parents are less educated and have lower achievement,” he says.

“If a kid lives in Raanana or Herzliya [near Tel Aviv], there’s a good likelihood that the parents are sufficiently well off that the parent can supplement what’s not provided at school with private tutors or help them in person,” Ben-David continues. “But that kind of assistance doesn’t exist in areas where the parents are less educated and as a result, also poorer. That’s exactly where you would expect a government to step in.”

Before this happens, however, he says that Israel’s education system in general needs a “major overhaul,” as it ranks the worst in the developed world in math, science and reading. “Our education budget today actually exceeds the defense budget for the first time in Israel’s history. It’s not like we are not spending enough; we are just not doing a very good job on what we’re spending,” Ben-David says. “We don’t have a clear set of guidelines of what the kids need to study… and we have to overhaul the way we choose, train and pay teachers. Exams provided by the [Education] Ministry are not calibrated, so they can’t be compared year to year to measure progress.”

The difference is the quality of their studies. It’s not that the kids in the center study at higher levels, per se, but at the higher levels, they study more and better

Prof. Erez Tzfadia, from the Department of Public Policy and Administration at Sapir College near Sderot and co-author of the book Rethinking Israeli Space: Periphery and Identity, argues that the inequality in the periphery’s education are caused by the amount of money localities have.

“Generally, every student in Israel has the right to certain resources and the Education Ministry provides this to the local authority,” he told The Media Line. “However, the local authorities realize this is not enough and that they have to provide additional funding in order to have a good school system. “For example, Herzliya is known for providing more money than any other locality in Israel to have a better schooling system. They are near Tel Aviv, they collect lots of property taxes [arnona], which includes large revenues from industries. In some places [in the periphery], they don’t have an industrial zone; they don’t have extra money to fund schools,” Tzfadia says.

He argues that the periphery’s difficulties are not only a matter of geographic remoteness but also a matter of politics. “The history of discrimination and humiliation within the Jewish community has to do with the question of ethnicity. Jews who arrived from North Africa were more likely to go to the periphery than Jews who came from Europe,” Tzfadia says.

“Some people think that Mitzpe Ramon [in the Negev] doesn’t have good educational facilities because it is in a remote place. I would say it’s due to the fact that African Jews were forced to live there as part of Israel’s official policy until the 1980s to Judaize parts of the country like the Negev. “Nobody thought they had the potential to be university students and therefore they were given poor schooling and facilities and so on,” he says.