Poll: 86% of Israelis are happy with their lives 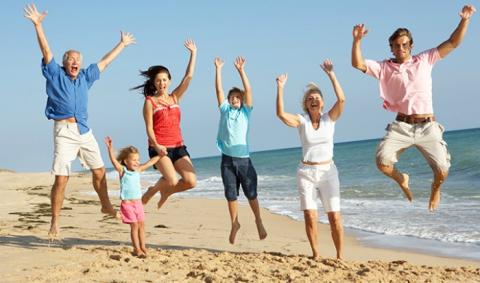 The overwhelming majority of Israelis are happy with their lives, and Israelis are more worried about housing prices and their children's education than about personal safety, crime, or employment security, according to the Quality of Life Report published Wednesday by the Central Bureau of Statistics. The data in the report was collected in 2013-2014 and is of an unprecedented extent, covering dozens of parameters and measures of the economic, social, and personal quality of life enjoyed by Israelis. All in all, according to the numbers, 86% of Israelis (90% of Jews and 73% of Arabs) are happy with their lives.

The report is the first one of its kind to rank the 10 issues Israelis see as most important. Housing prices were the No. 1 issue for Israelis, followed by the level of teaching and the education their children receive. Third was work conditions and treatment by employers, followed by economic stability and public infrastructure; green spaces and cleanliness of residential areas; balancing work and family life; crime; a sense of personal safety in public; affordable higher education; and employment security.

Rishon Lezion also starred in the rankings for the country's cleanest cities, with 70% of its residents satisfied that their streets were spick and span, compared to 54% of Haifa residents and 53% of Tel Avivians saying the same about their own towns. In Bat Yam, just south of Tel Aviv, only 44% of residents felt that the city was sufficiently tidy. The same percentage felt this way in Bnei Brak. Petach Tikva passed the white glove test of only 43% of its residents, and the capital, Jerusalem, was sufficiently clean in the eyes of only 35% of the people who live there.

"The theory of trickle-down [economics] has failed in the world, mainly in countries where there is a high level of inequality, like Israel. It's clear that the more we close the gaps, the more we increase growth. We are transferring from the strong to the weak so they will consume and increase economic growth," Environmental Protection Minister Avi Gabai said at the official event marking the report's publication.