Poll: 81% of israelis think that the country is a good place to live 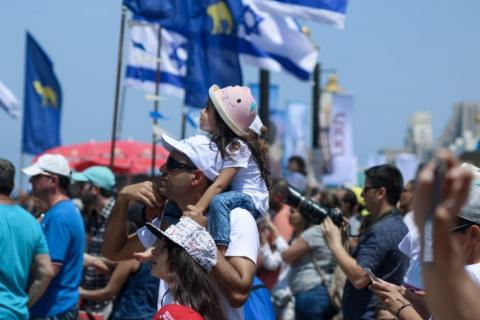 On the eve of Israel's Independence Day, 81% think that the country is a good place to live, while 73% believe that is is an established fact. A special poll conducted this week for The Jerusalem Post's sister publication Maariv by the research institute Panels Politics, headed by Menachem Lazar, for Israel's 70th Independence Day shows that the majority of citizens are proud to be Israeli, think Israel is a good place to live and are optimistic fo the country's future and their own.

At the same time, though most of the public believes that Israel is an established fact, the security tensions in the north are having an effect and most fear the possibility of war. The Internet poll, which reached 587 participants, of whom 484 were Jews and 103 Arabs, shows that 82% of the country's citizens are proud to be Israeli, of whom 56% are very proud and 26% mostly so. On the opposite side of the spectrum, 15% state that they are not proud to be Israeli, perhaps as a result of the similar statement made by radio anchor Kobi Meidan, who later apologized for his words.

Among those who are not proud of their Israeliness, 9% "are not very proud" and another 6% "are not proud at all." The analysis of the results indicates that 93% of right-wing and centrist voters are proud to be Israeli, while only 59% of those on the left feel pride.

An overwhelming  majority of the population, 73%, believe that Israel is an established fact, as opposed to only 18% who think that the existence of the state is in real danger. But alongside the sense of security that Israelis express regarding the existence of the state, 52% of the public fear that a war could break out in the near future, seemingly in light of the increasing tensions in the north and the Iranian threat to retaliate against Israel. 12% of the public are very fearful that a war could erupt in the near future, and 40% moderately fearful. In contrast, 31% are not so fearful and 7% are not fearful at all at the prospect of a war in the near term.

It is thus unsurprising that most Israelis identify the threat to Israel's security from outside, namely Iran, Hamas and Hezbollah (34%) and Palestinian terror (32%), as the most serious problems facing the State of Israel today, as well as the cost of living and economic inqeuality (32%). Only in fourth place (21%) do Israelis put corruption in the public sector. On the other hand, secular-religious relations bother only 10% of the public, and even fewer, 8%, are concerned by the state of Jewish-Arab relations.

Despite the large percentage who are concerned with economic problems, one can be heartened by the fact that 46% of the public are optimistic about the possibility of an improvement in the economic situation and social inequality over the next decade, as opposed to 43% who are pessimistic. Given the above, the poll shows that 21% of Israelis are willing to consider leaving the country under certain circumstances, whereas 72% are not willing to consider it.

Among those who would consider the option of emigration, 47% are leftists and 29% residents of Tel Aviv. 82% of those who are not considering emigration are rightists, among whom 79% are religious or haredi. The prime motivation for those who are considering leaving the country is the personal financial situation (52%), and only after that come justifications such as the threat to democracy (17%), growing religiosity (11%), or internal security (6%).