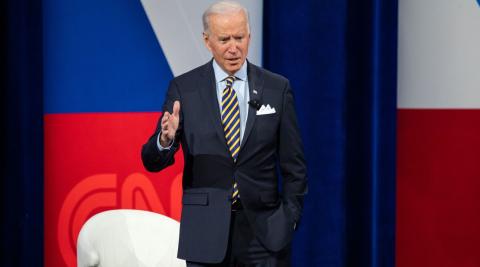 American Jewish voters give President Joe Biden a 70% approval rating, an American Jewish Committee poll found, while 26% of Jewish voters disapprove of his job performance. The survey published Wednesday, the first of its kind so far in Biden’s presidency, is commensurate with past Jewish support for Democratic presidents.

It is released as Biden seeks to quell the coronavirus pandemic that consumed the final year of Donald Trump’s presidency, calm racial tensions roiled by a year of protests against police violence, revive the economy and manage the crisis engendered by the conflict last month between Israel and Hamas.

Biden did not fare as well on the immigration issue during a crisis as migrants increase at the Mexico-U.S. border: 54% of respondents approved and 42% disapproved of how he has handled immigration.

Biden had the approval of only 19 percent of Orthodox Jews. In recent years, Orthodox Jewish polling has shown that the community politically is the polar opposite of the broader Jewish community, with overwhelming majorities of Orthodox voters supporting Republicans.

The survey was carried out by the SSRS research firm and has a margin of error of 4.5 percentage points, although the margin would be larger for subsets, for instance, in measuring the Orthodox community’s approval. Elements of the survey covering “U.S. political issues, U.S-Israel relations, and the peace process,” will be released later this month, an AJC release said.