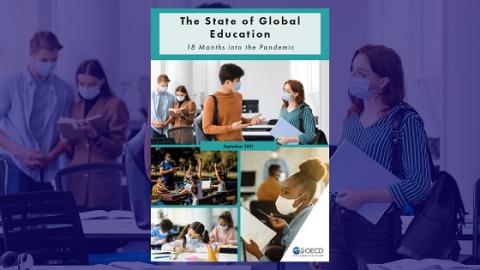 Israeli classrooms are among the most crowded among OECD countries, and the country’s teachers are getting paid less than average, according to an annual review of education in the economic organization’ member nations.

However, Israeli schoolchildren receive more hours of tutoring and the country is one of just a handful where over half the population gets some form of post-secondary education. The 2021 Education at a Glance report, published Thursday, found that Israeli schools had an average of 26.3 students per classroom, compared to the OECD average of 21.1.

Elementary schools in Israel had 26.8 students, with the OECD average being 21.1, putting the country in 35th place out of 38 ranked countries. In middle schools, there were 28.1 students in Israeli classrooms, compared to 23.3 in the OECD.

The ratio of teachers to students in elementary and middle schools in Israel was 15.1 and 12.9, respectively, close to the OECD averages of 14.5 and 13.1. “Smaller classes are often seen as beneficial because they allow teachers to focus more on the needs of individual students and reduce the amount of class time needed to deal with disruptions,” the OECD noted in the report.

However, the OECD said, Israel has managed to reduce the number of students in classes over time even as the student population has grown. Israel’s general population increase is among the highest for all OECD countries.

Israeli elementary and middle school teachers earn less than their peers, when their salaries are compared using a purchasing power scale that converts earnings in all countries to US dollars.

Teachers’ salaries “influence decisions to enroll in teacher education, to become a teacher after graduation, to return to the teaching profession after a career interruption and whether to remain a teacher,” the OECD said.

The number of students per class was especially relevant during the coronavirus outbreak, when each infected student would send all of their classmates into quarantine.

On the plus side, Israel dedicates proportionately more of its GDP to education than other countries. In 2018 it was 6.1%, third on the OECD list, behind Norway and Iceland.

Israel has has one of the highest average hours of teaching in elementary schools, with 938 hours per year compared to 807 for other countries. In middle schools, students study 989 hours compared to 923 for the rest of the OECD.

Post-high school education in Israel is among the most widespread among OECD nations. In 2020, 50.1 percent of Israelis had some form of higher education compared to 38.6% for the OECD average. It put Israel among just six countries in the OECD in which over half the population has a post-high school education, the others being Canada, the US, Luxembourg, South Korea and Japan.

Israel also had one of the highest gaps between men and women who achieve tertiary education. That year there were 20.9% more women than men who studied after high school, the fourth-largest gap in the OECD.

Overall, the figures were similar to the last OECD education report published in 2020, which also found classrooms were overcrowded and teachers were earning less than their OECD peers.