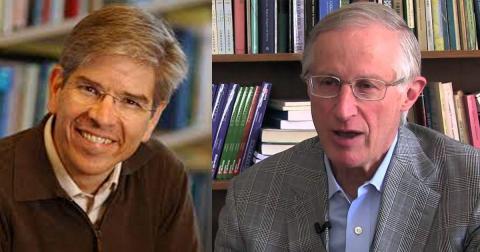 This year's Nobel prize for economics has been awarded to William Nordhaus and Paul Romer for their work on sustainable growth. The US economists' research focuses on how climate change and technology have affected the economy.

The Royal Swedish Academy of Sciences said they had addressed "some of our time's most… pressing questions" on how to achieve sustainable growth. The duo will receive nine million Swedish krona (£841,000).

Prof Nordhaus, of Yale University, was the first person to create a model that described the interplay between the economy and the climate, the academy said. Prof Romer, of New York University's Stern School of Business, has shown how economic forces govern the willingness of firms to produce new ideas and innovations. "Their findings have significantly broadened the scope of economic analysis by constructing models that explain how the market economy interacts with nature and knowledge," the academy said in statement.

Prof Romer courted controversy earlier this year when he stepped down as the World Bank's chief economist after just 15 months in the job. He had claimed that Chile's rankings in a closely watched "Doing Business" report may have been manipulated for political reasons under socialist president Michelle Bachelet. It came amid reports that the outspoken economist had clashed with colleagues at the Word Bank over a host of issues, including the organisation's culture and economists' use of grammar.

What these two prize winners have in common is that their research examined the unintended side effects from economic activity and how they affect growth in the long term. In the work of William Nordhaus these spill-overs are the negative consequences of climate change, which have been highlighted once again by scientists in the new report from the United Nations Intergovernmental Panel on Climate Change.

He developed an integrated method for looking at economic activity, and its environmental consequences and for evaluating responses to it, such as carbon taxes, an approach he has advocated. Paul Romer has focussed on the positive side-effects of technological change. He argued that innovators often don't get all the benefit of what they do, so market economies left to their own devices tend not generate enough new ideas.

Addressing this shortfall, he suggests, requires for well-designed government action to stimulate more innovation, such as subsides for research and development. Commenting on the prize, Prof Romer told reporters: "I think... many people think that protecting he environment will be so costly and so hard that they just want to ignore [this]. "[But] we can absolutely make substantial progress protecting the environment and do it without giving up the chance to sustain growth."

The Nobel economics prize - technically known as the Sveriges Riksbank Prize - was created by the Swedish central bank "in memory of Alfred Nobel" and first awarded in 1969. That is unlike the other prizes which were created in the philanthropist's last will and testament, and first awarded in 1901. Last year, US economist Richard Thaler, author of the best seller Nudge, won for his work in behavioural economics.

In 2016 it went to British-born American economist Oliver Hart and Finn Bengt Holmstrom for their work on "contract theory" - the study of how people develop legal agreements in situations with uncertain conditions.

Since it was first awarded in 1969, Americans have dominated the awards. Only one woman has won the economics prize since 1969, Elinor Ostrom in 2009.