The NFT Marketplace Born in an ultra-Orthodox School in Israel 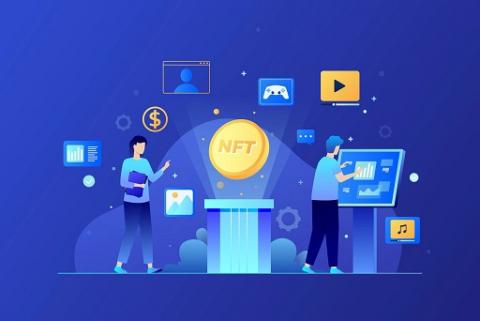 Over ten years ago, at the dawn of the Web 2.0 era, I was at a Google event where founder Sergei Brin and a team from Google US were present. I noticed that they were all wearing shirts bearing the legend: “Feed me.” This were the early days of internet feeds, the beginning of takeoff for social media, and Google still had aspirations to take an active part in the Web 2.0 revolution and to construct all our feeds.

A slight jump forward to February 2022: At a Web3 conference at Shenkar College, I saw two guys with shirts carrying small squares on the back, and beneath the square the caption: This shirt is an NFT. Underneath the shirt you could see the prayer fringes. The two men are Ariel Hassan and Lior Tor, of Amirim, and they are two of the entrepreneurs running Boyo, one of the most interesting and advanced NFT companies in Israel.

Web3 is a catch-all term for the prospect of a new stage of the internet driven by the cryptocurrency-related technology blockchain. Although blockchain is best known as a mechanism that makes bitcoin and other cryptocurrencies possible, it can also store data and even software code or images, like NFTs, or so-called non-fungible tokens. NFTs are digital assets that exist on the blockchain and carry unique digital signatures that cannot be reproduced. Sales of NFTs reached some $25 billion in 2021, according to data from market tracker DappRadar.

Hassan and Tor faithfully represent the new, decentralized spirit of the web, and come from an unexpected background. "We met while working as teachers for Haredi dropouts at Kfar Zeitim in the Galilee,” Tor says. “Ariel is an architect who comes from the Haredi world, and I arrived there after several life phases. My parents were among the pioneers of computer sciences in Israel, and I coded from a very young age. At a certain point I got fed up with it. I left computers, studied philosophy, embraced religion and wound up in Safed and then in Amirim, worked in farming and began teaching at Kfar Zeitim.

“I wanted to teach English but they had a shortage of computer teachers and I was asked to teach that. There was a PC technician track there when I arrived, but it was really boring. So I began incorporating coding and lessons in AI and even developed programs for the boys. That’s where Ariel connected with me. Apart from being an architect, Ariel is a man who works with his hands and can build anything. I came with development and programming abilities, and we built the track together, like a startup. We let the students develop ideas and turn them into real products.”

How does all this lead to a startup?

“Even back at the school lab, we raised funds from institutions to support the children’s initiatives. At a certain point it got too big for the school, and we signed up with an accelerator in Tiberias. Our mentor there, Eyal Eisenkot, really rebirthed us as a startup. A third entrepreneur named Yaakov Kruger joined us, with experience in entrepreneurship and finance, and together we began to put together an idea: To use technology to connect to the triangle of designer, manufacturer, and customer.

“We saw that designers and artists are at the bottom of the food chain in regards to manufacturing and marketing. They design something, put out a model or even a product, and suddenly copies pop up all over the world. We tried to find a solution that would enable designers and artists to issue limited editions that would be marked and protected online, with provable ownership.”

“Exactly, only we didn’t know what that was. At a certain point a mutual friend, who has been dealing with blockchain for several years now, told us about NFT, a digital document that can prove ownership of property through the blockchain. He helped us learn about the subject and develop our first product: A simple chip embedded in products. It can be scanned and proves that the product is authentic and was produced by the embedder of the chip. That’s the marking you saw on our shirts. With one click we turned them into NFTs.

“The product enabled anyone to turn a design, a drawing, or any other physical product into an NFT in two minutes. We thought that art would be to our product what books were to Amazon – a starting point from which we could eventually mark any product as an NFT, prove ownership, and follow the chain of owners of the product over time.”

And that’s not what happened?

“No. We discovered a closed and outdated art market, afraid of changes, and we decided to pivot and change the use of the technology. Now our product is a commerce arena, a marketplace, for trading NFT works. The platform is geared at the Web3 community, people who want to trade NFTs smartly, with a true integration of the community into ownership of their works.”

OpenSea, which was founded in 2017 and was recently valued at $13.3 billion, provides a similar service in the form of a NFT marketplace. NFTs have exploded in popularity over the last year, with people buying artworks and video highlights from sports games as NFTs.

When asked if they are not stepping into the same space as OpenSea, the two say that though, “It’s true that such platforms already exist, such as Open Sea and others. But we believe that this market is in its very initial phase, and suffers from great problems which we know how to fix.

“Mostly it isn’t truly decentralized as it should be. Artists don’t have real tools to manage and distribute their works. There’s a lot of spam and scams. The really big story of Web3 is missed by the big platforms, particularly Open Sea."

For them, the wider potential of Web3 can be reached through so-called Decentralized Autonomous Organizations, or DAOs – a method of corporate ownership and management based on blockchain and smart contracts. Many proponents consider Web3 the natural successor to both the early World Wide Web (Web 1.0) and the current internet of interactive websites and services, sometimes called Web 2.0. As of early 2022, Web3 remained a distant vision. Critics argue that it has yet to generate any widely useful applications. However, the two are optismitic this dream will become a reality.

“Undoubtedly DAOs! The ability to share your value production and profits with your community and the buyers of your art. The concept that buyers are partners is critical to Web 3.0. It liberates the company ownership to the stakeholders and investors and the concept that if you bring value – you get value. Current platforms barely express that.

“A platform that’s beginning to do that and integrate tools focusing on the creators and not just the commerce, is Looksrare, and shortly after they launched they were already valued at seven billion dollars. The scope of investment in NFTs has skyrocketed like crazy, reaching 25 billion dollars in 2021, and that caught everyone off guard. We think there’s an opportunity here to change and correct a market with countless failings. The daily trading volume on OpenSea is 150 million dollars, and they themselves admit that fraud accounts for 80 percent of the volume. We have no doubt that we can disrupt this market.”

How do you plan to do that?

“We turn the pyramid upside down: The creators will have tools to run and manage a community like they have on no other platform. We’ll make the creators partners in our platform, until we reach full community ownership of the company, with us completely diluted. Concurrently, we will integrate a long list of tools enabling the creator to focus on creative work and turn community members into professional partners in their work.

“Just like Wikipedia combines professionals and volunteers in moderating the platform, we build a platform that will protect the creator and their work. Only this isn’t volunteers, but full partners in the projects, reimbursed with digital currency. We think that our product will enable the NFT market to take a leap forward in terms of reliability, management, and marketing.

Where do you see yourselves in three years?

“NFT is just the tip of the iceberg. We believe that we can be one of the largest platforms in the world for a new kind of commerce in digital and physical products.”