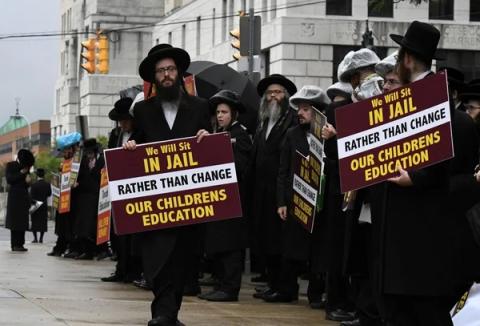 An unusual alliance, and its ultimate breakdown, lie behind last week's passage of long-delayed New York State regulations to force ultra-Orthodox yeshivas to uphold secular instruction requirements. But political jockeying sold out students and legal principles in the past, and may render also this latest reform attempt meaningless.

Since the 1800s, state law has required all New York public and private schools to provide "substantially equivalent" secular instruction. Throughout the 20th century the state education department carried out little or no enforcement on private schools, since its Office of Religious and Independent Schools mostly promoted the interests of the sector it oversaw and, even if outsiders knew about the statute, compliance was assumed.

After all, what else do schools do? Up until the mid-20th century, most private school students attended secular independent and Catholic institutions that taught traditional academic subjects, so the issue received scant attention. If anyone needed reassurance, lobbyists for the New York State Association of Independent Schools and the New York State Catholic Conference were able to restore complacency.

New York’s ultra-Orthodox yeshivas began to proliferate in the post-war years and, as recently recounted by Haaretz’s Anshel Pfeffer, over time secular instruction in those schools receded as Torah and Talmud study were prioritized. In male secondary schools in particular, religious studies sometimes entirely displaced secular subjects, including English.

In 2012, this arrangement was challenged by Young Advocates for Fair Education, a group of ultra-Orthodox yeshiva graduates led by Naftuli Moster, who chafed at the lack of secular education they had received. Using the century-old substantial equivalence statute, they challenged the New York State Education Department to intercede on their behalf with new regulatory muscle and to force then-Mayor Bill de Blasio to launch mandated inspections to ensure compliance.

The ensuing #YeshivaGate tussle led to a decade of agitation between YAFFED’s “David” and the “Goliath” of private school lobbyists and their supportive elected officials. The political might of Haredi and Catholic interests along with the wealthy clientele of New York’s independent schools created a unified bloc that stymied enforcement as well as newly proposed guidance and regulations.

As a result, all of New York’s more than 1,500 private schools would need inspections if YAFFED’s claims about a handful were to be substantiated. Local public school districts, saddled with the burden of actually inspecting the schools, also opposed this unfunded new responsibility.

Faced with this daunting regulatory task and opposition from tens of thousands of parents mobilized by the big three lobbying organizations, the New York State Education Department took no enforcement action despite its legal obligation to ensure all students were granted their right to learn English, history, the arts, science, math, and other statutorily required content. With virtually no other political support, YAFFED’s legal and moral claim to institute substantially equivalent secular instruction in ultra-Orthodox yeshivas was dead in the water.

As long as the big three coalition held, the legislatively-appointed Board of Regents that sets education department regulations kept further action at bay. But a single compromise broke the logjam.

NYSAIS, the independent school lobby, had long objected to any regulatory scheme that would encroach on its own role in accrediting member schools. The member schools, too, resented government involvement in their affairs. Offering high-level college prep programs and often with large endowments and tuition hovering at $50,000 per year, they were clearly teaching secular subjects and generally not receiving public funds. The idea of public school inspections was anathema to such an elite cadre.

The logjam finally broke in 2021 when this most privileged party to the paralysis, the wealthy independent schools, got their way with state regulators. NYSAIS backed a new framework that allowed its proprietary accreditation system to stand in for a regulatory review to enforce substantial equivalence. Though not meeting the detailed demands of state law, NYSAIS members would receive automatic waivers from regulations mandated on other private schools.

While rational at first glance – all NYSAIS schools teach secular subjects – the idea that proxies could replace regulatory substantial equivalence reviews gained steam with other private school networks, which realized tighter oversight was inevitable. A surge of new avenues for approval followed.

By 2022 the proposed regulations were soon riddled with these new workarounds including use of state tests (an accommodation for the Catholic Conference whose schools use standardized assessments), and exemptions for private special education schools. The statutory requirement of competent teachers for secular instruction gave way to tautologically vague demonstration of staff’s “appropriate knowledge, skill, and dispositions.” Timelines for compliance were softened.

The problem is that most of these workarounds and watered down requirements also apply to ultra-Orthodox schools that do not, in fact, provide substantial equivalence. An accrediting organization could be ginned up by the combined Agudath Israel/Torah Umesorah or PEARLS, an organization created for the sole purpose of defending ultra-Orthodox yeshivas’ avoidance of substantial equivalence regulation.

Following the New York Times expose into the lack of secular education at New York ultra-Orthodox yeshivas, the New York State Education Department found itself under renewed pressure. Faced with the necessity of setting generally applicable regulations that don’t single out one group of private schools for special attention and the political need to accommodate multiple special interests to speed investigations and gain approval for these regulations, the New York State Education Department approved a regulation shortly after that investigation was published.

However the regulations entrench loopholes that the New York Times predicts “could render the changes meaningless.”

The decade-long process leading to New York’s new private school regulations confirms the classic expression that law-making is like sausage production. What seemed like a simple exercise in enforcing a long-standing legal requirement became a case study of political influence and power. Whether the result will finally ensure substantially equivalent secular instruction in all New York private schools including ultra-Orthodox yeshivas remains an open question.