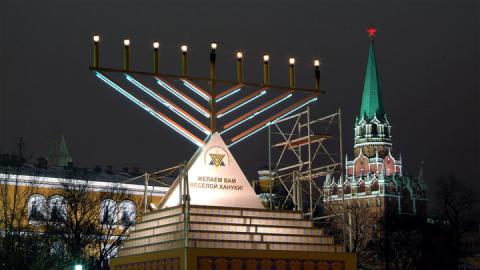 A new study conducted for the Euro-Asian Jewish Congress on Jewish identity among Jews from the former Soviet Union has found that despite a lack of religious emphasis in Jewish identity, connection to Jewish ethnicity among this population remains strong.

The study conducted in cooperation with Tel Aviv University and authored by Prof. Vladimir "Ze’ev" Khanin, interviewed 2,362 representatives of the “extended Jewish population” of the former Soviet Union to examine the cultural and communal identities of Jews in these countries in order to give a clearer understanding to Jewish organizations as to how to engage with them.

“The study clearly shows that ethnic, rather than religious or simply cultural understanding of Jewishness remains the ultimate element of post-Soviet Jews, including persons of mixed origin and non-Jewish members of their families,” said Khanin. Additionally, Khanin said that the study demonstrated the “formation of a new sub-ethnic group of the Jewish people – the Russian-speaking Jews,” including those who remained in the former USSR and those who resettled in Israel, the US and other countries.

“The role of religion in the post-Soviet Jewish identity remains insignificant, and religious criteria for determining Jewishness, irrelevant in the Soviet times, are still on the periphery of the local Jewish national collective consciousness,” the study found. Asked “What does it mean to be a Jew today, 72% of respondents said ‘To feel belonging to the Jewish people,’ and 58% said to be proud of Jewish history and culture. ”Only 33% said “To have Jewish parents and only 16% said “to observe religious commandments and attend synagogue.”

The study also demonstrated that the State of Israel “remains among the most important factors in the personal, cultural and ethno-national identification of Jews of the former USSR and that most of the social communication networks, connections and, indeed, migration plans of the Russian-Jewish diaspora focus on the Jewish state. “The legacy of the Soviet era steadily preserved by the former Soviet Union Jews is the secular nature of their ethnicity – their origin, identity, national language, and other elements of ethnic culture,” the report finds.

“We are quite confident that the process of ethnic and cultural assimilation of former Soviet Union Jews and their families is reversible,” said EAJC president Dr. Mikhael Mirilashvili. “We are speaking of about 500,000 people today, two-thirds of whom are ethnic Jews and representatives of the first generation of mixed families, according to our most conservative estimates of the target group in the territory of the former USSR, who might be interested in participating in Jewish programs.

“Getting all these people involved in Jewish activities is not an easy challenge for regional and umbrella Jewish organizations, but practice shows that where there are challenges, there are opportunities.”