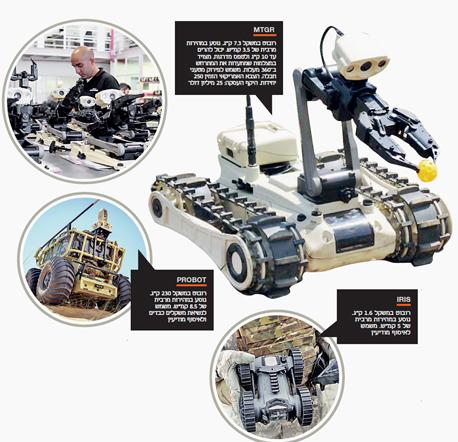 “If you want to send robots where you don’t want to send soldiers, you need a solution for that,” said Elad Levy, CEO and founder of Roboteam. His company, together with Elbit Systems, on Tuesday, announced the debut of what they are calling “the mothership of unmanned vehicles”: ROOK, a multi-payload military 6x6 Unmanned Ground Vehicle (UGV).

The UGV’s innovative design and built-in autonomy suite offers improved capacity, maneuverability and agility from its previous models, creating “a human machine” that is “really part of the team,” said Yoav Poizner, the senior director of Elbit C4I and Cyber.

He said the ROOK is the next step toward enabling “everything that happens in the sky” through use of drones and aerial robots to occur on the ground and in the field where soldiers need it, too. The ROOK was developed based on the operational experience accumulated through fielding of the 4x4 PROBOT UGV systems, which became operational a few years ago through a first collaboration between the two companies.

What makes ROOK most unique is that it started as a connected system, the teams said. “Because we built it from the first screw, we know how the robot works with the software,” Levy said. “It has built-in autonomy and built-in artificial intelligence that provides a full solution. Without that level of sophistication, you would not want to rely on it in the field.”

The ROOK was designed from scratch as a robotic UGV platform in compliance with applicable military standards, a release explained. It has a modular box structure that allows for components to be replaced by users in the field without the support of the manufacturer.

Other features include a low center of gravity, essential for carrying heavy payloads on rough terrain. The ROOK weighs 1,200 kg. (2,646 lbs.) and can carry a payload equivalent to its own body weight. It stands 24 cm. above the ground and travels at a speed up to 30 kilometers an hour (19 mph).

The machine has full compliance with the UGV Interoperability Profile (IOP) for seamless plug-and-play payload integration. The battery weighs 40 kg. (88lbs.) and lasts up to eight hours. There is an option to carry a spare battery or set up an internal generator for longer missions.

ROOK is operated either via the TORCH-X RAS application or through an all-weather seven-inch ruggedized display unit, enabling a single operator to control several unmanned systems. The machine can navigate the desert, snow or other rough terrain, and during sunlight or at night. Its sophisticated sensors can recognize soldiers and follow after them in the field, allow it to drive off-road without toppling, and give it the power to tell the difference between grass, stone and other pathways to keep it on course and avoid an accident – just as if a human was driving it.

The company expects the machine to be used to deliver supplies, function as medevac to pull casualties from the field, take part in intelligence gathering missions - including carrying and dispatching drones - and serve as a remote weapons system. “You can send the ROOK to places you don’t want to go,” said Levy.

Roboteam was founded in 2009. Today, it has 40 employees working out of its United States and Israeli headquarters. All of the employees were either in the Israel Defense Forces or the US military, giving the company the ability to match and meld its engineering with the actual reality of the battlefield.

The company, Levy said, started with a vision in his grandmother’s house. Roboteam scored its first big contract in 2012 when it supplied 100 man-carried robots to soldiers in Afghanistan, a deal worth $10 million. Since then, the company has expanded, and now has robots in 20 countries worldwide.

It has contracts in Norway, the United Kingdom, France, Italy, Thailand and other places. Roboteam and Elbit joined forces in mid-2019 with a commercial agreement that led to making its PROBOT operational. The ROOK is its latest collaboration.

The machine will cost between $150,000 and $300,000 the company said, depending on configurations. The TOOK is ready to be deployed, Levy said, and is already being evaluated by some of its clients. Eventually, he believes there will be hundreds of thousands of ROOKs in the field.

What is next? Collaboration between air and land robots, he said, for example deploying an aerial and a land robot to photograph a certain area and then merging the pictures for a complete perspective. “There is no end to the vision and imagination,” Levy said. “The ROOK is just the first step. We are talking about a revolution.”