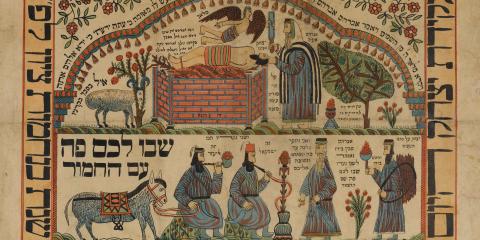 An exhibition opened to the public on Wednesday at France’s Institut Du Monde Arabe (IMA) exploring the centuries-old history of Jewish communities in the Arab world. The exhibit, called “Eastern Jews,” takes a “chronological and thematic approach” to describe “the great times of Jewish intellectual and cultural life in the East and will reveal the prolific exchanges that have shaped the societies of the Arab-Muslim world for centuries.”

It will address how Jewish and Muslims have cohabited over centuries, “from the first links forged between the Jewish tribes of Arabia and the Prophet Mohammed to the emergence from the main figures of Jewish thought during the medieval caliphates in Baghdad, Fez, Cairo and Cordoba; from the rise of Jewish urban centers in the Maghreb and in the Ottoman Empire to the beginnings of the final exile of the Jews of the Arab world.”

Featured in the exhibit are unpublished works in a variety of formats, including archeology, manuscripts, paintings, photographs, liturgical, and audiovisual and musical installations. Items in the exhibition, which runs through March 2022, are all on loan from collections in France, England, Morocco, Israel, United States and Spain.

The IMA said it will also expand its efforts outside of the exhibit to teach people about Jewish communities in the Arab world, including a program of concerts, shows and film screenings.  The museum noted that “ambitious mediation actions will be carried out for the public, in particular among the younger generations” and that “a scientific publication and conferences, in connection with the exhibition, will deepen these fascinating themes.”

“Eastern Jews” is a continuation of IMA’s trilogy of exhibitions that focus on monotheistic religions in the Arab world. IMA previously featured the exhibits “Hajj, the pilgrimage to Mecca” in 2014 and “Christians of the East, 2000 years of history” in 2017.

France’s President Emmanuel Macron attended the exhibit’s inaugural opening on Monday. In his speech at the event, he praised “the strength [and] spirit of resistance” of Jewish communities in the Arab world, “their “deep unity” and “powerful, creative, abundant culture.”

“At a time when the Arab world, like our own European societies, is shaken by identity tensions, this exhibition speaks to us about coexistence, enlightened influences, mutual enrichment, exchanges between monotheisms,” he said. “Of course, without any naïve optimism, the history of the Jews of the East is also full of persecution, suffering, conflicts, exodus. But between the darkest years, there were periods of sumptuous flowering, bridges thrown between languages, between knowledge, between cultures.”

“To trace the thread of this Eastern history is to unravel the intertwining of faces, voices, migrations, and communities that have crisscrossed the entire Mediterranean basin — shaping the world and leaving a lasting imprint each time,” Macro added. “What this exhibition shows very well is that this community has always known how to dialogue with the other cultures it lived alongside: Roman, Byzantine, Arabic, Iberian, Ottoman; that it has always combined its texts with other languages to resist, survive or be transmitted.”