The new discovery of Israeli archaeologists in Gobekli Tepe 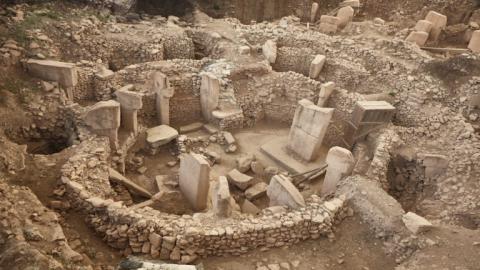 The enigmatic monoliths built some 11,500 years ago at Göbekli Tepe have been puzzling archaeologists and challenging preconceptions about prehistoric culture since their discovery in the 1990s. Chiefly, how could hunter-gatherers with a supposedly primitive societal structure build such monumental stone circles on this barren hilltop in what is today southeastern Turkey? How could a largely nomadic society at the dawn of agriculture marshal the resources and know-how to create what its discoverers have dubbed the oldest known temple in the world?

If anything, a discovery by Israeli archaeologists suggests the Göbekli Tepe construction project was even more complex than previously thought, and required an amount of planning and resources thought to be impossible for those times. Their study of the three oldest stone enclosures at Göbekli Tepe has revealed a hidden geometric pattern, specifically an equilateral triangle, underlying the entire architectural plan of these structures.

This implies that, in contrast to the prevailing assumption among Göbekli researchers until now, these three circles were planned as a single unit and possibly built at the same time, say archaeologists Gil Haklay and Avi Gopher of Tel Aviv University. Thus, thousands of years before the invention of writing or the wheel, the builders of Göbekli Tepe evidently had some understanding of geometric principles and could apply them to their construction plans, concludes the study published in January in the Cambridge Archaeological Journal.

“The initial discovery of the site was a big surprise and we are now showing that its construction was even more complex than we thought,” says Haklay, an Israel Antiquities Authority archaeologist and a PhD candidate at Tel Aviv University.

The first phase of construction at Göbekli Tepe, or “potbellied hill” in Turkish, has been dated to between 12,000 and 11,000 years ago. This is the earliest part of the Neolithic, also known as Pre-Pottery Neolithic A (or PPNA), around the time people in the Northern Levant began domesticating plants and animals, launching the Agricultural Revolution. The site’s builders erected several concentric stone circles, setting into the walls massive T-shaped pillars that reached almost six meters in height, many of which were decorated with reliefs of animals and other motifs. These circles appear to have been built around pairs of pillars positioned roughly in their center.

Only four circles from the PPNA, dubbed enclosures A, B, C, and D, have been excavated so far, but surveys have shown there are at least 15 more scattered around the hill, as well as half a dozen other similar unexplored sites across southeastern Turkey.

The new study focused on enclosures B,C, and D, which are known to be slightly older than A. Based on the assumption that such a massive construction project would have been beyond the capacities of the small, non-sedentary groups that usually comprise hunter-gatherer societies, most scholars have assumed that all the circles at Göbekli Tepe had to have been built gradually over a long period of time.

“There is a lot of speculation that the structures were built successively, possibly by different groups of people, and that one was covered up while the next one was being built. But there is no evidence that they are not contemporaneous,” Haklay tells Haaretz.

Haklay, who formerly worked as an architect, applied a method called architectural formal analysis, which is used to trace the planning principles and methods used in the design of existing structures.

Using an algorithm, he identified the center points of the three irregular stone circles. Not surprisingly, those points fell roughly mid-way between the pair of central pillars in each enclosure. What was surprising, however, was that those three points could be linked to form a nearly perfect equilateral triangle. Specifically, the vertices are about 25 centimeters away from forming a perfect triangle with sides measuring 19.25 meters each.

“I certainly did not expect this,” Haklay recalls. “The enclosures all have different sizes and shapes so the odds that these center points would form an equilateral triangle by chance are very low.”

The finding confirms previous research by Haklay and Gopher at other sites showing that architects in the Neolithic or even in the late Paleolithic didn’t build shelters and homes haphazardly but had the ability to apply rudimentary geometric principles and create standard units of measurement.

At Göbekli Tepe, the discovery of the pattern is evidence of a complex abstract design that could not be realized without first creating a scaled floor plan, Haklay says. At a time when the invention of writing was millennia away, this could be accomplished, for example, by using reeds of equal length to create a rudimentary blueprint on the ground, he suggests.

“Each enclosure subsequently went through a long construction history with multiple modifications, but at least in an initial phase they started as a single project,” the archaeologist concludes. “The implication is that a single project at Göbekli Tepe was three times larger than previously thought and required three times as much manpower – a level that is unprecedented in hunter-gatherer societies.”

The construction would have required hundreds or maybe thousands of workers and could be taken to mark the birth of a more stratified society, with a level of sophistication previously seen only in later, sedentary groups of farmers, says Gopher, an archaeology professor at Tel Aviv University and Haklay’s PhD advisor.

“This is where it starts: The sharing instinct of hunter-gatherer societies is reduced and inequality is growing; someone is running the show – I don’t know if it’s shamans or political leaders, but this is a society that has an architect and somebody who initiates a project like this and has the power to make it happen,” Gopher says.

The new study is “an amazing contribution to the understanding” of this enigmatic site, says Anna Belfer-Cohen, an archaeology professor at the Hebrew University in Jerusalem and an expert on late prehistory. However, given that there are many stone circles at Göbekli Tepe and other sites nearby that have yet to be excavated, we don’t know if the same conclusions can be applied to all these enclosures, cautions Belfer-Cohen, who did not take part in the study.

“These three enclosures may have been built together, but it doesn’t mean that the others were not constructed as single units, perhaps by different groups,” she says. “We have only uncovered the tip of the iceberg of this phenomenon, but it is more likely that there were many different groups that considered this entire area sacred and converged on it to erect the enclosures, rather than a single group that went crazy and just constructed these complexes day and night.”

How and why Neolithic hunter-gatherers would mobilize the massive resources needed to build Göbekli Tepe and other sites like it is the subject of much speculation. While some researchers have interpreted the structures as residential spaces, most archaeologists see little evidence of this and consider the sheer monumentality of the complex and the richness of its iconography as evidence of a ritual purpose.

The massive T-shaped pillars and the reliefs on them – animal and human-like - have been interpreted as totems: perhaps representations of protective spirits, possibly long-deceased ancestors, some of whom were believed to take on animal form. The idea that the zoomorphic and anthropomorphic images may represent the venerated dead was reinforced by the recent discovery of modified skull fragments buried at the site, which many researchers consider to be evidence of ancestor cults (similarly to the interpretation of stone masks found throughout the Levant from about 9,000 years ago).

The identification of the hidden geometrical pattern strengthens the interpretation of Göbekli Tepe as a cultic site, say Haklay and Gopher. The southern side of the triangle runs through the central stone pillars of enclosures B and C, creating a base for the polygon. The axis perpendicular to this line runs through the entire site and ends in the center of enclosure D, which can be interpreted as the top of the pyramid.

This suggests that the builders understood and wished to represent the idea of a hierarchy, perhaps intending to crystalize the new order of a less equal and more stratified society, Haklay and Gopher maintain.

The stratification was not limited to human relations: it suggests a change in the perceived relationship between humans and nature, the archaeologists suggest. That’s because of what is found at the top of the triangle, at the center of enclosure D.

While the site’s signature T-shaped pillars have all been interpreted as stylized human figures, the central monoliths of enclosure D are the only ones that are clearly anthropomorphic, bearing reliefs of hands, a belt, and possibly a loincloth. Placing these human depictions at the top of this triangle would have been a powerful message, and represented an ideological departure from the animal-centric canons of Paleolithic art.

“In Paleolithic art humans are rare, and this is true here as well, but you start to see change, the beginning of an anthropocentric world view in which animals and plants are no longer equal to humans but are subordinated to them,” Gopher tells Haaretz.

In other words, Göbekli Tepe may have been designed, consciously or unconsciously, to represent and perhaps explain humanity’s growing ability to manipulate its environment, which, in the coming centuries, would lead to the first domesticated crops in this very region, the researchers say.

"The end of the hunter-gatherer lifestyle is more of an ideological transformation than an economic or technological one,” Gopher maintains. “Hunter-gatherers cannot domesticate anything, it’s against their world view, which is based on equality and trust. Once that ideology changes, the entire structure of society is transformed and a new world is born.”