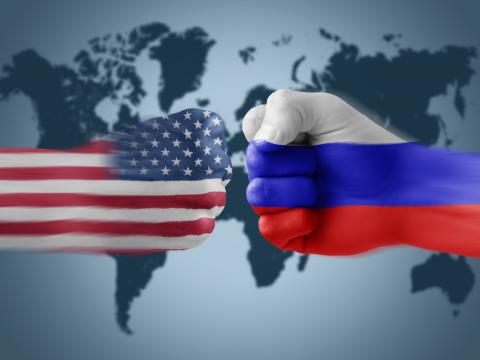 Henry Kissinger aptly characterized two centuries of Russian foreign policy in his 2001 book Does America Need a Foreign Policy? “Throughout its history, with all its ups and downs,” he wrote, “Russia has conducted a persistent, patient, and skillful diplomacy: with Prussia and Austria against the specter of French domination; with France against Imperial Germany; with England, France, and Hitler’s Germany to avoid isolation; with the United States and Britain to avoid disaster during World War II; and, during the Cold War, by trying to split Europe from the United States through a combination of nuclear blackmail and the support of movements that portrayed the United States as the greater threat to nuclear peace.”

These observations were made not long after the turbulent presidency of Boris Yeltsin had come to an end. Nearly 18 years now into the less turbulent but far more ominous era of Vladimir Putin, Russia’s latest approach to the United States has become clear. The present moment of political chaos in America—the Mueller investigation, the “Trump dossier,” Russia-linked “bots” on social media—tells us a great deal about Russia’s strategic disposition in the early 21st century.

Russia spans 11 time zones. It shouldn’t feel the need to expand. But it does. Russian military exercises near the borders of Finland and the Baltic states are a constant threat to our NATO allies, and Russia’s shadow war in eastern Ukraine and brutal annexation of Crimea are expressions of its expansionist aims. It has begun again to establish proxy states—think of Syria—to extend itself into spheres of American influence and make trouble for its chief geopolitical adversary.

Of course, Russia cannot match America’s capacity for conventional warfare, but it compensates for that imbalance by emphasizing facets of what military observers call “hybrid warfare”: attacks on the enemy’s communication systems, cyberwarfare, and the aggressive use of fabricated media reports and other forms of disinformation. What Russia’s most forward-thinking military minds have grasped is that part of what gives modern Western militaries their conventional superiority—their technologies, especially their communications technology—can be turned against them with a little creativity.

That approach has manifested itself in America’s domestic sphere, too. The Russians are aware of how divisive our politics have become and seem to have concluded that with modest efforts they can turn American eyes inward.

In the summer of 2016, the Democratic National Committee’s email server was hacked and its contents given to WikiLeaks. The uproar, though less damaging to the Democrats than they would come to pretend after their 2016 loss, was an embarrassment to the party’s presidential nominee and her staff. American intelligence officials are convinced Russian actors carried out the hacking. Reports from the FBI, CIA, and NSA have further concluded that Russia attempted to influence the presidential election, probably in favor of Donald Trump, by the use of social media “trolls” and other forms of cyberwarfare.

Then there were Hillary Clinton’s emails. As secretary of state, she made highly improper use of a private email server, which led to a legitimate fear it had been hacked. This allowed Russian operatives to tantalize her enemies with the prospect of getting their hands on thousands of those emails. In at least two cases, shady characters purporting to have close ties to the Kremlin suggested they could make these emails available to Clinton’s political enemies: first, to a Trump foreign-policy adviser named George Papadopoulos, whose lies to FBI investigators about the encounters earned him a federal indictment; second, to Donald Trump Jr. in a meeting also attended by Trump campaign chairman Paul Manafort and Trump son-in-law Jared Kushner.

When Donald Trump won the 2016 presidential election, Democratic pundits and politicos suddenly became concerned about Russian meddling in our elections. Theretofore they had been as blithely willing to solicit the Russians for opposition research as Don Jr. And in at least one case, the Russians obliged. When the DNC and the Clinton campaign commissioned an opposition research outfit called Fusion GPS to find unflattering information about Trump—carefully paying Fusion through a law firm so as to keep it off the campaign’s disclosure form—what they got in return was at least partly a collection of wild rumors and outright lies, courtesy of Russian disinformation artists.

On November 1, attorneys for Facebook, Twitter, and Google testified at a Senate Intelligence Committee hearing about Russia-linked accounts purchasing ads and spreading content on their platforms. Facebook estimates that accounts linked to Russian sources reached as many as 126 million users during the run-up to the 2016 election. Some of these accounts posted content and ran ads maligning Hillary Clinton, but the ads sought to manipulate both right and left. Some encouraged violence against police officers; others incited violence against Black Lives Matter activists. Some called for rallies defending gun rights; others called for anti-Trump protests. In one instance, separate Russian-linked ads called for dueling protests at an Islamic center in Houston. According to the Texas Tribune, people showed up on both sides and traded insults.

Most Democrats, predictably, see only one lesson here: Russia threw the election to Donald Trump. The fact that Hillary Clinton was a terrible candidate who ran a poor campaign seems lost on them. But let’s leave aside the election’s outcome. Let’s also leave aside the questions of whether anyone on Trump’s campaign cut a deal with Russian government actors to tilt the election and whether bogus social media ads actually persuaded people in Michigan and Wisconsin to change their votes.

Let’s forget the politics of it.

The far more relevant point is that Russia actively engaged in these activities and in doing so threw our political culture into a state of acrimonious distraction. Russian activities have hamstrung a presidency in its first year and nearly maddened a new president’s opponents. This week’s indictment of Manafort on charges of evading taxes and laundering money paid to him by Russia-linked entities only deepens the morass in which the Trump administration finds itself as a result of Russian interference.

The new Cold War is subtler and more cryptic than its predecessor. So far it involves hacked websites and email servers rather than proxy wars in Asia or Africa; “fake news” rather than diplomatic summits; inflammatory social media ads rather than the threat of thermonuclear annihilation. What makes America especially vulnerable is not a loss of military superiority but our fracturing democracy and our technological connectedness. But it is war, and the Russians are fighting it with persistence, patience, and skill. We had better learn to fight it, too—perhaps first by learning not to fight ourselves.