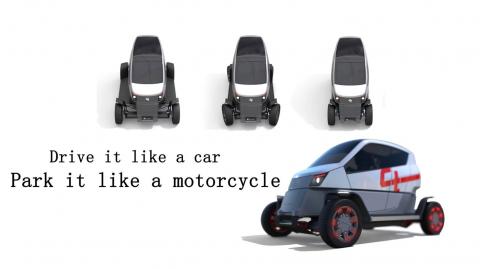 A new vision for urban transportation will be unveiled at the fifth annual International Fuel Choices and Smart Mobility Summit,  October 31 to November 1 in Tel Aviv. The made-in-Israel City Transformer is an electric smart car whose wheelbase folds in at the push of a button to fit into a motorcycle parking space. City Transformer is touted as the world’s first vehicle of its kind.

CEO Asaf Formoza and Chief Innovation Officer Udi Meridor spoke to ISRAEL21c as the City Transformer concept car was being assembled in Petah Tikva earlier this month. “We have collaborations and partnerships with huge companies, including Yamaha Motor Ventures; Altair, which makes simulation software for Ferrari, Fiat and other manufacturers to assure stable handling; and Rassini, a tier-one suspension company in Mexico that works with Mercedes, Maserati and other luxury brands,” said Formoza, who has a PhD in mechanical engineering from Ben-Gurion University.

The car will be engineered to go up to 90 kilometers (56 miles) per hour in drive mode and about 30 mph in parking mode as the narrowed car is maneuvering into a spot. The climate-controlled vehicle with an aluminum chassis will weigh about 450 kilograms (992 pounds) excluding the battery, driver and passenger. The size of the battery is still to be determined. “We are in negotiations with one of the biggest tier-one manufacturers about the battery and power train,” says Meridor.

City Transformer also plans to offer a three-seater for an adult and two children (think taking kids to school before work and picking them up afterward) as well as a one-seat small cargo version. Designed by the Yama Group in Kfar Netter, Israel, City Transformer’s prototype will incorporate connected-car software and is planned to be launched as a stage 3 autonomous vehicle with computer-controlled braking and acceleration.

Meridor says the eventual goal is to make a model that is fully autonomous (stage 5). “We have a competitive advantage because we can embed technologies really fast and partner with other companies’ solutions when the technology is ready.”

The low-maintenance, energy-efficient cars are intended for individual drivers as well as corporate fleets. “We also hope to use City Transformer for car-sharing stations because it takes almost the same amount of space as bike sharing, and that’s one of the biggest advantages,” says Meridor.

Formoza started the company in 2013 with partners Gideon Goldwine, a fellow mechanical engineering PhD from Ben-Gurion and cofounder of a student team to build the first Israeli Formula SAE car; and Erez Abramov, a practical engineer and rally sport driver experienced in developing motor sport vehicles. In May 2013, the founders first presented City Transformer at EcoMotion,  an Israeli government- and industry-sponsored event aimed at creating a collaborative community to work on alternative smart transportation solutions. The Fuel Choices and Smart Mobility Summit grew out of that.

City Transformer, whose business office is in Ramat Gan, plans a Series A funding round in early 2018 in order to build the first 50 cars. Formoza says the basic model probably will cost $10,000 and the premium model $13,000, not including battery and taxes.