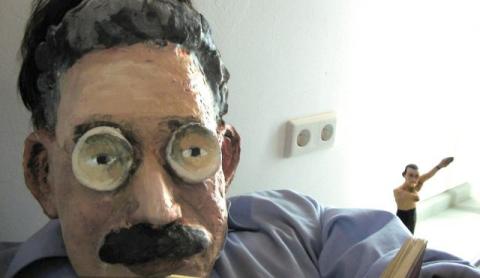 “Walter Benjamin in Berlin,” by Volker März (2008). Photo by Courtesy of Volker März.

It’s become almost commonplace in recent years to point to the countless doctoral dissertations devoted, on the one hand, to the pro-Nazi philosopher Martin Heidegger, and, on the other, the German-Jewish pro-communist critic Walter Benjamin. It is no coincidence that two of the most popular figures among students of the humanities lived in the same period – the age of the crisis of democracy.

Images of crisis, shock and catastrophe fill the pages of both thinkers, both of whom chose to radicalize the notion of crisis, although they went in opposite directions. Heidegger turned it into an interpretation of immanent and biologically conditioned existence, whereas Benjamin worked within a social, humanistic context. Heidegger tried to escape city life, while Benjamin dived into it – he once illustrated the arrival of springtime in Paris as an explosion of a bomb at the center of the city.

A new biography of Benjamin – who was born in 1892, and committed suicide at France’s border with Spain in September 1940 – builds on decades of research by scholars around the world. It complements the critic’s well-known studies of art and literature, as well as the countless monographs on those studies that over the decades have inundated the academic-book market, even as enrollment numbers in the humanities have plummeted.

To read Benjamin and the story of his life is to open a world of knowledge – especially that of the last century, which begins to look like the Renaissance. And so we view the German humanities shortly before its demolition as an academic discipline. Yet, in spite of Benjamin’s own melancholic tone, and the elegiac writing about him, it seems he would not have minded the decline of the good old humanistic world, and might even have welcomed the decline of the modern critique he helped to form. In a diary entry from 1938, he quoted a maxim by Bertolt Brecht: “Don’t start from the good old things but the bad new ones.”

This biography is both new and good – very good. Howard Eiland and Michael W. Jennings worked on its 700-plus pages for over seven years. Distinguished American academics – Eiland is a literature professor at MIT, Jennings professor of modern languages at Princeton – they previously edited their subject’s “Selected Writings.” Each of them has devoted a large part of his career to investigating Benjamin, and this volume benefits from their respective expertise, as well as the richness of the material. The close attention to Benjamin’s terminology, for instance, is apparent on every page of this volume, a masterpiece of its kind.

The careful reading is most apparent in the sections devoted to political philosophy. In fact, if there is a single thread running through this rich study, it is its depiction of the trajectory of a man who joined the bourgeois German left wing early in the 20th century, and slowly gravitated to radical Marxist and anarchist circles. At a few points along the way, the surprised reader bumps into the inevitable conflicts between the left-wing radicalism Benjamin embraced and the right-wing radicalism of Heidegger and his peers, including Carl Schmitt, Ludwig Klages and Ernst Juenger.

In contrast to a contemporary tendency to put Heidegger and Benjamin on the same (sinking) ship, Eiland and Jennings dwell on the dividing lines. As they demonstrate, Benjamin and Brecht outlined the contrast in April 1930 when they wrote a proposal for a journal entitled Krisis und Kritik (Crisis and Critique): “The journal’s agenda,” the biographers write, “included the ‘annihilation’ of Heidegger.”

The quintessential academic insider, Heidegger inspired Benjamin with a profound antipathy to what he saw as the former’s uncritical admiration of the father figure and an unquenched hunger for power. The reading practiced in the biography questions such easy glorification, implicitly subscribing to Benjamin’s attacks on the depoliticization of critique and its revolutionary potential. Yet it does not try to soft-pedal Benjamin’s own hope to become a role model, an “intellectual sharpshooter,” or a “pacemaker,” a trend-setter.

The biography asks the critic’s readers and admirers to reconsider the European intellectual world of the previous century, acknowledging that while it may often declare itself radical, even anarchistic, it applies a strictly hierarchical and autocratic set of norms to defend its turf.

A foe of the conscious and unconscious glorification of the state, its institutions and governance, Benjamin imagined a world full of ruins, a writing that is “politically committed,” the attempt to touch what “has been negated.” He collapsed the distance separating political critique and the critique of language. In a letter that was meant to unnerve his best friend, philosopher and historian Gershom Scholem, he explained: “The stance of the materialist seems scientifically and humanly more productive in everything that moves us than does that of the idealist.”

The provocation succeeded, and Scholem, who detested both radical secularist universalisms and the dialectic materialism of the Marxists, responded by accusing Benjamin of self-deception and self-betrayal.

Like Benjamin, Eiland and Jennings set out to unnerve their readers. Michael Jennings told me, in a phone conversation: “The political dimension in Benjamin’s writings was ousted in the Anglo-American world. That’s exactly what we tried to revive. We wanted to take apart the mythic image of Benjamin as a melancholic icon.”

Thus, in contrast to much of the recent academic Benjaminiana, here we see a man fully committed to a Marxist analysis of the means of production – a commitment he recharged with theological undertones, rejecting capitalism’s “destruction of the conditions necessary for an adequate human experience.”

Then again, Benjamin never adopted the Marxist dogmatism of friends from the Frankfurt School, friends such as Theodor Adorno and Max Horkheimer. His Marxist rejection of Zionism was, his biographers show, as firm as his rejection of anti-Semitism – a stance that upset many of his pro-Zionist Jewish friends. As he wrote in 1935 of Scholem, “He is inclined to see in my situation the avenging hand of the Almighty, whom I have angered through my Danish friendship [a reference to Brecht, who was living on the island of Funen at the time and who reject, much like Benjamin, any form of national sentiment].” The price he paid for this insistence on absolute independence was isolation and frequent bouts of depression.

The authors do not limit their anti-Romanticism to purely intellectual matters. Their biography portrays a conflicted and a conflicting man who was depressed and sometimes aggressive, a gambler, an unloving father and an unappreciative husband. Yet they clearly admire his philosophical sophistication and stylistic innovations. They are far from being alone: Benjamin’s “angel of history” has turned out to be one of the most celebrated images of modern Western culture; his “Storyteller” is taught in literature departments; his “The Work of Art in the Age of Mechanical Reproduction” is studied in every art school; his “Theses on the Philosophy of History” is studied in history departments; and his unfinished “Arcades Project” is read in those departments of German and French studies that have not yet been shut down.

One might say that scholars influenced by Benjamin constitute a distinct subdiscipline. Many of them return to the language of gestures developed, for example, in the essay “Franz Kafka,” written in 1934: “Each gesture is an event – one might even say a drama – in itself. The stage on which this drama takes place is the World Theater, which opens up toward heaven.”

Eiland and Jennings subversively connect this to the critic’s own demeanor, as described by his friend Charlotte Wolf: “He had not the male bearing of his generation. And there were disturbing features about him which did not fit with the rest of his personality. The rosy apple-cheeks of a child, the black curly hair and fine brow were appealing, but there was sometimes a cynical glint in his eyes.... His posture and gestures were ‘uptight’ and lacked spontaneity, except when he spoke of things he was involved in or of people he loved.... His spindly legs gave the sorry impression of atrophied muscles. He hardly gestured, but kept his arms close to his chest.”

Nothing less than a passion to “open up heaven” drove Benjamin, though he worked at a time when philology was still a leading humanistic science. Nowadays he is considered a pioneer of interdisciplinary thinking. His writing relies on a broad yet thorough study of literature, on archival documents, on toys, and on his day-to-day anthropological observation of individuals and their material and spiritual condition. One thrills to read observations such as the one he wrote to Gretel Karplus: “In these last weeks, I have come to recognize the hidden structural character of today’s art... I have realized my epistemological theory – which is crystalized around the very esoteric concept of the ‘now of recognizability.’”

His ability to recognize both the context and his own subjectivity at the moment of observation was extraordinary, and its implications revolutionary, as he proposed the examination of examination, a reading – simultaneously close and distant – of the examined and the examiner himself. This twofold inspection enabled Benjamin to focus on the context of a political system that conditions and controls our will via language and other forms of mediation (film, theater, literature, journalism, architecture and so on).

Accordingly, an attempt over the last year of his life to summarize what he had achieved led him to speak of the moral obligation to “brush history against the grain... to blast open the continuum of history... [that] gives a revolutionary chance in the fight for the oppressed past.”

In some ways, Benjamin’s theory of history is relevant to the state of the humanities in Israel. But this should not surprise us. After all, as the authors write: “Benjamin [established] himself as the most important German cultural critic of his day.” A source of inspiration to the intellectuals identified with cultural Zionism and the early days of the Hebrew University of Jerusalem – Scholem, Buber, Brod and Bergmann among them – Benjamin is a key to the understanding of that particular history, and of its critique.

But what does the future hold for the thought of Walter Benjamin and Benjaminiana, whether in the Middle East or in the Western world? After all, as Benjamin admitted when he turned down Scholem’s invitation to immigrate to Palestine, his whole world was Berlin’s Wilmersdorf quarter. In a letter from May 1940, Benjamin ironically speculated about the possibility of an ingenious synthesis, namely, “a combination of Nietzsche’s ‘good European’ and his ‘last man.’ This synthesis would result in the last European – something we are all striving not to become.”

History possesses both a strong affinity for irony and a painfully simple language of symbols. From our perspective, Benjamin does seem like the last European, a role he did not covet, but one we thrust on him anyway.

In spite of the fine translations by David Singer and Juergen Nirad, readers of Hebrew have seen little of the Benjamin renaissance and even less of the last European. The fine new biography should be translated, so that it can serve as an essential guide to both those already acquainted with one of the great thinkers of the 20th century, and the general public that knows him not at all.

Nitzan Lebovic
Dr. Nitzan Lebovic teaches modern European and Jewish history at Lehigh University, in Pennsylvania. He is the author of “The Philosophy of Life and Death: Ludwig Klages and the Rise of a Nazi Biopolitics” (Palgrave Macmillan, 2013).