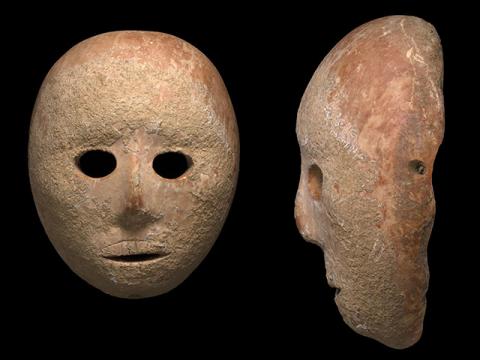 Israeli archaeologists have retrieved a 9,000-year-old mask that was discovered by chance by a settler taking a walk in the hills south of Hebron, in the West Bank, officials said Wednesday. The Neolithic artifact, made of stone, is among the oldest surviving ritual masks in the world, archaeologists believe. It was carved when humans were transitioning from a life of hunting and gathering to agriculture for subsistence, and were beginning to form complex societies.

The mask was spotted lying on the surface of a field late last year by a settler who had gone out for a walk, said Ronit Lupu, an archaeologist with the Israel Antiquities Authority robbery prevention unit. Speaking to Haaretz, Lupu did not reveal the exact location of the find or the identity of the settler but she said there was “no reason” to believe there was any wrongdoing or attempted looting involved in the discovery.

Since its discovery, archaeologists have been surveying the site where the mask was purportedly found and have been testing the artifact to confirm its authenticity and provenance. Only 15 other Neolithic masks have been confirmed as authentic, and almost all surfaced already in the hands of private collectors around the world rather than in archaeological digs, meaning experts cannot glean much information about their provenance or function.

Rare prehistoric artifacts like these masks are a prime target for looters and forgers, and can fetch up to 1 million dollars each on the antiquities market, says Omry Barzilai, an IAA archaeologist and expert on prehistory who studied the find. The trade in bootleg antiquities is keenly frustrating to archaeologists because of the resulting difficulty in proving an artifact's authenticity, and the loss of opportunity to seek associated objects at the site.

While some of the masks have holes on the sides, it is not clear if they were attached to the face, or may have been too cumbersome for that purpose. They may have been used as death masks or displayed in some other way, experts postulate.

Other stone representations of the human face from the Neolithic period have been found across the Levant, including at Göbekli Tepein Turkey. But these tend to be relatively abstract and researchers are divided as to whether they can be considered actually masks. As a result, the Neolithic masks from southern Israel tend to be considered the earliest clear manifestation of this cultural phenomenon.

The first mask to appear in the public sphere was bought in 1970 from a dealer near Hebron by none other than Moshe Dayan, Israel’s legendary defense minister and passionate collector of (sometimes looted) antiquities. Other masks were later revealed in private collections around the world, mainly in the United States.

One of the few masks to emerge from an archaeological dig was found in 1983 in a cave overlooking Nahal Hemar, a stream flowing into the Dead Sea near the Israeli town of Arad. Even then, the artifact was found broken into pieces in a pile of rubble left by looters who had already ransacked the site.

In 2014, the Israel Museum hosted a landmark exhibition of the Neolithic masks found in Israel and that spread around the world, and were regathered for the show. The exhibition was the result of a decade of research to locate the masks, and the artifacts underwent multiple scientific tests to determine their authenticity. After excluding one forged item, experts concluded that the authentic ones had originated in the Judean hills and the surrounding desert.

“We did a lot of detective work to locate the masks and developed a scientific protocol to determine if they were authentic,” says Debby Hershman, now deputy chief curator of the Eretz Israel Museum. Hershman led the team behind the 2014 exhibition together with Yuval Goren, an archaeological scientist from Ben Gurion University, and Leore Grosman, head of the computerized archaeological lab at the Hebrew University.

One of the conclusions the team reached was that the masks may have indeed been fastened to faces for use in rituals, Hershman says. This was based on the 3D reconstruction and analysis of the artifacts, which showed that the distances between the eyes and mouth in the masks followed the proportions of the human face and would have allowed the wearer to easily see and breathe through them, she said.

Still, there is no substitute for being able to link a find to its archaeological context, experts say. With the help of the settler who found the mask, the Israel Antiquities Authorities located the site of the new discovery and conducted a preliminary dig, unearthing flint tools that are typical of the period called Pre Pottery Neolithic B – the same period to which all the masks belong. Testing the isotopes in the calcite encrustations that developed over thousands of years on both the tools and the mask – the researchers found that they matched, proving the objects came from the same place and time.

“This is the first mask we have found in the last 35 years, so it’s important in itself,” says Lupu. “But even more importantly, we have a chance to fully excavate the site and receive a better picture of the material life connected to this cultic object, ” such as how it was used or in what context.

The fact that this mask, along with the Nahal Hemar one, were both found between the West Bank and the Judean desert strengthens the supposition that this phenomenon was limited to this region. Stone masks may have been the local version of similar iconographic phenomena from the same period elsewhere in the Levant, says Barzilai.

Neolithic sites in northern Israel and up to Damascus are often characterized by plastered skulls. These were created by removing the skulls of the dead and decorating them with plaster, seashells and other materials. Elsewhere, in the Jordan Valley and to the east of it, archaeologists tend to find plaster statuettes of human figures.

The most likely explanation, archaeologists suggest, is that these artifacts represent local variations of a burgeoning ancestor cult connected to the switch humans in the area had made from being hunter-gatherers to settling down and farming the land.

“This is the height of the Neolithic revolution, the period when grains were domesticated. People settled down and built houses with beautiful plastered floors and created a very developed material culture,” says Barzilai. “When you become an agricultural society, land becomes hugely important, because you have invested a lot of work in it, and you have to mark it as yours somehow: through architecture, burial or ritual.”

In other words, the masks, the plastered skulls and the figurines of the Neolithic may have functioned almost as a ritual property registry, Barzilai says. They may have represented – or in the case of the plastered skulls, literally were – the ancestors of these early farmers, who displayed or worshipped the artifacts to show their connection to a place and their right to a certain piece of land.

Whether this theory is correct may or may not be borne out by the results of the archaeological dig at the newly-discovered site near Hebron. But come to think of it, this is not very different from what humans do today in the Middle East and other conflict-ridden areas of the globe. Nine thousand years later, Jews, Arabs and other groups still invoke the presence of their ancestors in this land to say the same thing: “We have a right to be here.”