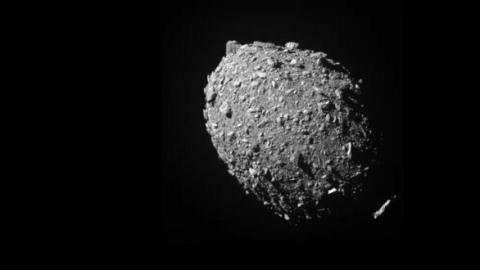 The American space agency's Dart probe has smashed into an asteroid, destroying itself in the process. The collision was intentional and designed to test whether space rocks that might threaten Earth could be nudged safely out of the way. Dart's camera returned an image per second, right up to the moment of impact with the target - a 160m-wide object called Dimorphos. What had been a steady image stream cut out as the probe was obliterated.

Controllers, based at the Johns Hopkins University Applied Physics Laboratory (JHU-APL), erupted with joy as Dimorphos filled the field of view on Dart's camera just before then going blank. Initial calculations suggest the impact was a mere 17m off the exact centre of Dimorphos.

It will be some weeks before scientists on the Nasa-led mission know for sure whether their experiment has worked, but Dr Lori Glaze, the director of planetary science at the space agency, was convinced something remarkable had been achieved.

"We're embarking on a new era of humankind, an era in which we potentially have the capability to protect ourselves from something like a dangerous hazardous asteroid impact. What an amazing thing; we've never had that capability before," she told reporters.

Researchers will determine success, or otherwise, by studying the changes to the orbit of Dimorphos around another asteroid known as Didymos. Telescopes on Earth will make precise measurements of the two-rock, or binary, system.

Before the collision, Dimorphos took roughly 11 hours and 55 minutes to circle its 780m-wide partner. This ought to reduce by a few minutes following the crash. Certainly, on the evidence of the pictures coming back from 11 million km from Earth, everything appeared to go exactly to plan.

The Dart probe, moving at the relative velocity of 22,000km/h, had to first distinguish the smaller rock from the larger one. Onboard navigation software then adjusted the closing trajectory with thruster firings to ensure a head-on collision.

Scientists were fascinated to see - albeit briefly - the different shapes of the two asteroids. Didymos, as expected, had a diamond shape. There were boulders on its surface but also some smooth areas.

Dr Carolyn Ernst, the instrument scientist on Dart's camera system, was extremely excited to see Dimorphos. "It looks adorable; it's this little moon; it's so cute," she said. "It looks in a lot of ways like some of the other small asteroids we've seen, and they are also covered in boulders. So we suspect it is likely to be a rubble pile, kind of loosely consolidated."

Dart is an acronym for Double Asteroid Redirection Test.

It was designed to do "exactly what is says on the tin", JHU-APL mission lead Dr Andy Rivkin told BBC News. "This technique, called the 'kinetic impactor technique' could be used if there were to be an asteroid that was incoming at some point in the future. It's a very simple idea: you ram the spacecraft into the object you're worried about, and you use the mass and the speed of your spacecraft to slightly change the orbit of that object enough so that it would miss the Earth instead of hitting the Earth."

Dimorphos and Didymos were carefully chosen. Neither was on a path to intersect with Earth before the demonstration, and a small alteration in their orbital relationship will not have increased the risk.

But there are rocks out there that could potentially pose a danger to us. Although sky surveys have identified more than 95% of the monster asteroids that could initiate a global extinction were they to collide with Earth (they won't; their paths have been computed and they won't come near our planet), this still leaves many so-far undetected smaller objects that could create havoc, if only on the regional or city scale.

An object of Dimorphos's scale would dig out a crater perhaps 1km across and a couple of hundred metres deep. The damage in the vicinity of the impact would be intense. Hence the desire to see if an asteroid can be nudged into going slightly slower or faster. The change in velocity wouldn't have to be great, especially if done many years in advance of the expected intersection with Earth.

"An analogy is if you're wearing a wristwatch and you damage it, and it starts running fast by a little bit," explained Dart mission scientist Dr Nancy Chabot, also from JHU-APL. "You might not notice the error in the first day or two, but after a few weeks you will begin to notice that the watch is just not keeping correct time anymore. It's running fast; it's ahead of where it should be."

Dart's image stream may have ended abruptly at impact, but there was a small Italian cubesat following three minutes behind. It was snapping away at the safe distance of 50km. The LiciaCube's data will be beamed back to Earth over the next few days.

But even in the first picture returns it was evident that the cubesat caught sight of the plume of debris dug out by Dart. Four years from now, the European Space Agency (Esa) will have three spacecraft - collectively known as the Hera mission - at Didymos and Dimorphos to make follow-up studies.