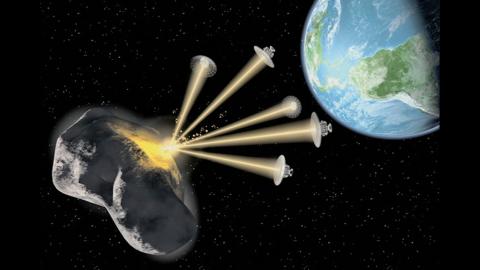 Imagine humans get eight years of warning that a large asteroid might be on a collision course with Earth. Could we do anything about it? Right now, scientists don't know of any space rocks on track to cause serious damage to Earth in the foreseeable future. But if they spot one, they'd rather have a headstart in protecting people — so they're practicing by designing missions to a hypothetical threatening asteroid. The exercise is part of the International Academy of Astronautics' Planetary Defense Conference being held here this week.

For the exercise, NASA experts have designed a scenario in which scientists in March 2019 discover an asteroid that could impact Earth in April 2027. It's a fictional but realistic scenario, fully fleshed out so that scientists, engineers, policymakers and emergency-management experts can work through questions and concerns that might arise if scientists ever do identify such a threat.

And of course, a vital component of any response to such a situation is spacecraft. Space agencies would want to put together two different types of missions: first, reconnaissance projects that would get experts the data they need to evaluate the situation as confidently as possible; and second, mitigation projects that could avert a disaster if it becomes clear such an action is necessary.

When it comes to the hypothetical scenario that planetary defense experts are playing out this week with simulation data, decisionmakers concluded pretty quickly that they wanted to start planning mitigation missions right away, even if these projects might later be scrapped if additional data clarifying the hypothetical asteroid's path concluded that Earth would be safe.

They also scrambled to send a reconnaissance mission out to get that data, and, as of the end of yesterday (May 1) in the conference — which simulates December 30, 2021, in the exercise — that mission had sent back enough data for scientists to be confident that the asteroid would impact Earth around Denver, Colorado. (Again, no need to panic about a fictional scenario.)

Needless to say, the world would prefer not to lose the Mile High City, so this reconnaissance data would mean humans have a little more than five years to execute missions to avert (hypothetical) catastrophe. It turns out that it's very difficult to knock an asteroid onto an entirely new trajectory; instead, the key is to slow a space rock down or speed it up enough that it reaches the trouble point in its orbit before or after Earth has already been there.

On the timeline the scenario is investigating, with eight years between discovery and impact, planetary defense experts have two potential approaches. A kinetic impactor basically acts as a stumbling block: Put a large spacecraft in the asteroid's path; the asteroid hits it and slows down just a little. If your impactor is large enough and catches the asteroid with lots of time to spare, you can delay the asteroid enough that it misses the disastrous 2027 collision with Earth.

But there's a hitch: given the details of the hypothetical scenario, humans would need to slow down the asteroid much, much more to save themselves than if they tried to speed it up instead. They aren't sure of the asteroid's mass yet, but its size — on the scale of 850 by 460 feet (260 by 140 meters) — suggests humans would need three separate stumbling blocks, and would likely want to send six in case of glitches.

Those spacecraft would need to launch around 2023 in order for Earth to emerge unscathed (and remember, in this scenario, that's just a year and a half away, and before scientists know the precise details of the object). Another cause for concern: If engineers go overboard on such devices, they could accidentally break the hypothetical asteroid into pieces, making Earth's risk much more difficult to understand.

There's a second type of mitigation mission — detonating a nuclear explosionabove the surface of the asteroid, causing part of its surface to vaporize and the remainder of the space rock to recoil. This approach is also more adaptable to the many questions scientists still have about the hypothetical asteroid, like its mass and structure. The effect of a specific explosive device can be tuned, so to speak — detonate closer to the asteroid and the blast is stronger, detonate farther away and the effect is more gentle.

Fortunately, the NASA team working on the simulation exercise has an elegant solution — if at a staggering scale — to offer. First, build and launch (within just six months) two complex spacecraft that could fly out to the hypothetical asteroid and orbit it for several years. These probes would gather the information planetary defense experts need to modulate their attack of the space rock. Then, build and launch six missions to block the asteroid's path and slow it down, with the orbiting spacecraft monitoring that process. As a safety precaution, the team recommends, those two spacecraft could also be armed with nuclear devices: If, once scientists know all the details of the hypothetical space rock and its adjusted trajectory, they still aren't comforted, those explosive devices could polish off the job, should a global consensus to go nuclear arise.

Of course, no one wants to see this scenario unfold in real life. But by running the numbers and calculating the trajectories, planetary defense experts can be more confident that, if they do detect a real asteroid that poses a real risk, they can put together a plan.