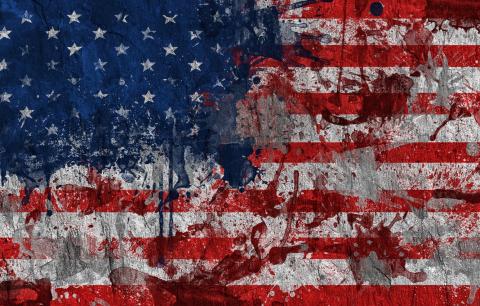 The United States feels like it is unravelling. It’s not just because of a toxic election season, a national crisis over race, unemployment and hunger in the land of opportunity, or a pandemic that’s killing tens of thousands every month. The foundation of our nation has deepening cracks—possibly too many to repair anytime soon, or, perhaps, at all.

The ideas and imagery of America face existential challenges—some with reason, some without—that no longer come only from the fringes. Rage consumes many in America. And it may only get worse after the election, and for the next four years, no matter who wins. Our political and cultural fissures have generated growing doubt about the stability of a country that long considered itself an anchor, a model, and an exception to the rest of the world. Scholars, political scientists, and historians even posit that trying to unite disparate states, cultures, ethnic groups, and religions was always illusory.

“The idea that America has a shared past going back into the colonial period is a myth,” Colin Woodard, the author of “Union: The Struggle to Forge the Story of United States Nationhood,” told me. “We are very different Americas, each with different origin stories and value sets, many of which are incompatible. They led to a Civil War in the past and are a potentially incendiary force in the future.”

The crisis today reflects the nation’s history. Not much, it turns out, has changed. The country was settled by diverse cultures—the Puritans in New England, the Dutch around New York City, the Scots-Irish dominating Appalachia, and English slave lords from Barbados and the West Indies in the Deep South. They were often rivals, Woodard noted: “They were by no means thinking of themselves belonging to a protean American country-in-waiting.” The United States was “an accident of history,” he said, largely because distinct cultures shared an external threat from the British. They formed the Continental Army to stage a revolution and form the Continental Congress, with delegates from thirteen colonies. Almost two hundred and fifty years later, a country six times its original size claims to be a melting pot that has produced an “American” culture and a political system that vows to provide “life, liberty and the pursuit of happiness.” Too often, it hasn’t.

Centuries later, the cultural divide and cleavages are still deep. Three hundred and thirty million people may identify as Americans, but they define what that means—and what rights and responsibilities are involved—in vastly different ways. The American promise has not delivered for many Blacks, Jews, Latinos, Asian-Americans, myriad immigrant groups, and even some whites as well. Hate crimes—acts of violence against people or property based on race, religion, disability, sexual orientation, ethnicity, or gender identity—are a growing problem. A bipartisan group in the House warned in August that, “as uncertainty rises, we have seen hatred unleashed.”

When Athens and Sparta went to war, in the fifth century B.C., the Greek general and historian Thucydides observed, “The Greeks did not understand each other any longer, though they spoke the same language.” In the twenty-first century, the same thing is happening among Americans. Our political discourse has become “civil war by other means—we sound as if we do not really want to continue to be members of one country,” Richard Kreitner wrote, in the recently released book “Break It Up: Secession, Division and the Secret History of America’s Imperfect Union.” At different times in America’s history, the Union’s survival was produced as much by “chance and contingency” as by flag-waving and political will. “At nearly every step it required morally indefensible compromises that only pushed problems further into the future.”

The attempt to reckon with our unjust past has produced more questions—and new divisions—about our future. In Washington, D.C., last week, a group commissioned by the city’s mayor, Muriel Bowser, recommended, in a report, that her office ask the federal government to “remove, relocate, or contextualize” the Washington Monument, the Jefferson Memorial, and statues to Benjamin Franklin and Christopher Columbus, among others. The committee compiled a list of people who should not have public works named after them, including Presidents James Monroe, Andrew Jackson, and Woodrow Wilson, the inventor Alexander Graham Bell, and Francis Scott Key, who wrote the national anthem. After a deluge of criticism, Bowser said on Friday that the report was being misinterpreted and that the city would not do anything about the monuments and memorials. But a question remains, not just because we live in the era of Black Lives Matter: What is America about today? And is it any different from its deeply flawed past?

There was always an ambiguity about what the United States was supposed to be, Woodard said. Was it supposed to be an alliance of states (as the European Union, with twenty-seven distinct governments, is today), or a confederation (like Switzerland, with its three languages and twenty-six cantons), or a nation-state (like post-revolutionary France), or even a treaty mechanism, to prevent intra-state conflict? After the American Revolution, the “ad-hoc solution” was to celebrate the shared victory against the British; core differences were not addressed. Today, America is still conflicted about its values, whether over the social contract, the means of educating its children, the right to bear or ban arms, the protection of its vast lands, lakes, and air, or the relationship between the states and the federal government.

Last week, President Donald Trump threatened to withhold federal funds to four major cities—New York, Washington, D.C., Seattle, and Portland—because of “anarchist” activities during weeks of protests. “My Administration will not allow Federal tax dollars to fund cities that allow themselves to deteriorate into lawless zones,” the President’s five-page memo said. It was the latest of many acts by Trump that have further divided the nation, although the trend did not start with him.

Since the eighteen-thirties, the United States has gone through cycles of crises that threatened its cohesion. The idea of a revolutionary republic committed to equality (at the time, only for white men) started to erode as regional differences surfaced and the first generation of revolutionaries died out. States or territories have repeatedly pushed for independence—Vermont formally joined the Union in 1791, after spending fourteen years as an independent republic. The State of Muskogee, a multicultural republic of Native Americans, escaped slaves, and white settlers around Tallahassee, lasted from 1799 until 1803. In 1810, a small group of settlers captured a Spanish fort in Baton Rouge and declared the creation of an independent Republic of West Florida; their capital was St. Francisville, Louisiana. They elected a president, wrote a constitution, and designed a flag (a white star on blue); the movement died after President Monroe annexed the region. There were others, including the Republic of Fredonia, in Texas, the California Republic, and the Indian Stream Republic, in New England. The biggest rupture, of course, was in the eighteen-sixties, when eleven states—Texas, Arkansas, Louisiana, Tennessee, Mississippi, Alabama, Georgia, Florida, South Carolina, North Carolina, and Virginia—seceded to form the Confederacy.

Wide divisions again threatened to cause a breakup of the nation in the nineteen-thirties, the nineteen-sixties, “and now again?” the Yale historian David Blight told me. Today, America is littered with prideful secessionist movements. Mirroring Brexit—Britain’s exit from the European Union—they advocate for Texit (Texas), Calexit (California), and Verexit (Vermont). In 2017, a Vermont poll found that more than twenty per cent of Vermonters believed that the state should consider “peaceably leaving the United States and becoming an independent republic, as it was from 1777 to 1791.” The Texas Nationalist Movement, which claims hundreds of thousands of members, is demanding a state referendum on secession. Then there’s the more fanciful proposal for Cascadia, a progressive bio-republic carved out of northern California, Oregon, Washington, and the Canadian provinces of British Columbia and Alberta. The trend is bipartisan and transregional; secessionist sentiment has even emerged in the last two states to join the union—Alaska and Hawaii.

The need for internal trade and the dangers of external threats have helped hold America together. Disparate factions throughout the country rallied to counter British aggression in the eighteenth and nineteenth centuries; the Germans and the Japanese, in the twentieth; and Al Qaeda, after the 9/11 attacks, in the twenty-first. But, now, without outside threats, the nation is increasingly turning on itself. “We are definitely not united,” Blight said. “Are we on the brink of secession of some kind? No, not in a sectional sense. But, in the interior of our minds and our communities, we are already in a period of slow-evolving secession” in ways that are deeper than ideology and political beliefs. “We are tribes with at least two or more sources of information, facts, narratives, and stories we live in.” The United States today, Blight said, is a “house divided about what holds the house up.”

In his new book, Kreitner argues that, with its politics irrevocably broken, America is running out of time. The potential for physical and political separation is now real, even though the polarization of America does not have neat geographic borders. No red state is entirely red; no blue state is entirely blue. “The twenty-first century has seen an unmistakable resurgence of the idea of leaving or breaking up the United States—a kaleidoscopic array of separatist movements shaped by the conflicts and divisions of the past but manifested in new and potentially destabilizing ways,” he writes. Unlike in the past, the current separatist impulses have emerged in multiple places at the same time. “Often dismissed as unserious or quixotic, a throwback to the Confederacy, the new secessionism reveals divisions in American life possibly no less intractable than the ones that led to the first Civil War,” Kreitner warns.

In the years to come, the appeal of pulling the plug on the American experiment is likely to grow, even among faithful adherents to the idea of federal power. And, if the Union dissolves again, Kreitner writes, it will not be along a clean line but “everywhere and all at once.” In some ways, the election, now only eight weeks away, will be a temporary relief, at least in ending the current agonizing uncertainty. But it will play only one part in deciding what ultimately will happen to our nation. “Are we a myth? Well, yes, in the deep sense. Always have been,” Blight said. To survive, America must move beyond the myth.