Mossad chief: the Middle East there was "a one-time opportunity" to regional peace 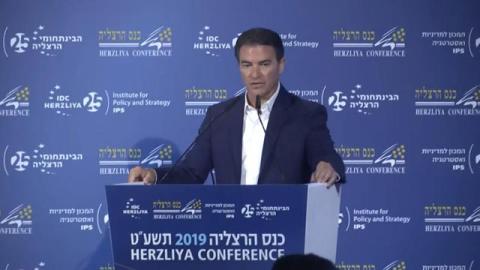 Yossi Cohen says the main obstacle to an unprecedented 'comprehensive peace agreement' is Iran, that vies for hegemony in the Middle East; the head of the intelligence agency also accused the Islamic Republic of carrying out attacks on oil tankers in the Gulf of Oman.

The head of Mossad intelligence agency on Monday said Israel currently has “a one-time opportunity” to achieve an unprecedented regional peace. “The Mossad sees a rare opportunity to reach a regional understanding that would lead to a comprehensive peace agreement,” said Yossi Cohen at the Herzliya Conference, the main event of the Institute for Policy and Strategy at IDC Herzliya. “Common interests as well as a fight against common adversaries create - perhaps a one-time - window of opportunity,” Cohen said. “It’s the Mossad's role to lead this effort.”

The 57 year old then went on the offensive, claiming Iran, which is vying for a regional hegemony, is trying to sabotage these peace efforts. “There is a list of countries that recognize Israel, accept our existence and maintain cooperative relations out of mutual respect … Additional countries have also joined this list but implicitly - we have shared interests and open channels of communication. “These countries are not willing to tolerate Iran's thuggish behavior, positioning Israel as their focus for hatred," he said.

Cohen went as far as to state with certainty that Iran was responsible for last month's attacks of two oil tankers in the Gulf of Oman. "The debate over who is responsible for the (Gulf of Oman) attack is vital," Cohen said, "and I can tell you with certainty, from the best Israeli and Western sources, that Iran is definitely behind these attacks." "Through these attacks, Iran is trying to tell the world it is not afraid of an escalation, and that if sanctions are not removed or eased it will cause serious harm to the global oil market," he added.

On June 13, the US Navy confirmed that it received distress calls from two oil tankers reportedly under attack in the Gulf of Oman, with reports that the vessels were struck by "torpedoes" or naval mines.

Cohen also rattled off a number of other terror-related activities allegedly spearheaded by Iran, including the transfer of huge sums of money to Islamist extremist organizations based in Lebanon and Gaza. "Iran is the main sponsor of terrorist organizations in Lebanon and the Gaza Strip. Israeli intelligence sources say that in the past two years, Iran has transferred more than $ 100 million to Hamas and Islamic Jihad, most of which were dedicated to military buildup in both organizations," said Cohen.

Switching to Syria, the spy chief noted that the "overt and covert actions Israel has taken over the past four years" has limited Tehran's military entrenchment in Syrian territory, with Cohen predicting that continued Israeli pressure will eventually lead Iran to give up its efforts in the country. Cohen's comments came just hours after Israel reportedly struck several targets across Syria, including the capital of Damascus and the central city of Homs, killing at least 15 people.