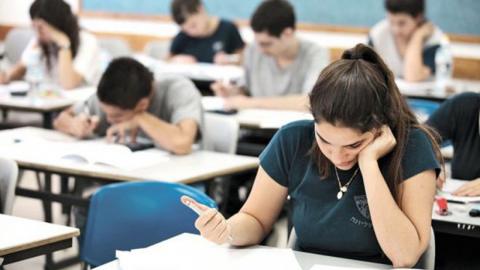 Schools in the Druze sector and the National-Religious sector led in a number of fields in rankings released by the Education Ministry this week. The ministry announced that there was a slight drop in the percentage of high school students who were eligible for a bagrut (matriculation) certificate in the 2019 school year.

A number of the schools that achieved 100% matriculation eligibility have acceptance requirements and charge thousands of shekels in tuition payments. The ministry also published a ranking of schools based on the percentage of students who earned an “outstanding” matriculation certificate, which means that they learned five units of English and at least four units of mathematics with an average grade of 90. The students must also achieve excellence in a program for personal development and social-community involvement.

The Darchei Noam National-Religious school for girls led the list of schools with “outstanding” matriculation certificates and was joined by six additional National-Religious schools for girls in the top 17 schools in this regard. The Al-Qasemi Academy in Baka al-Gharbiya ranked in second place in this regard, and was joined by four other schools in the Arab sector and one school in the Druze sector in the top 17. Four general state schools ranked within the top 17 as well.

On Tuesday, the ministry published a list of 755 “outstanding” high schools based on a number of parameters, including special education, IDF conscription, civil services, matriculation eligibility and improvement. Some 48% of the schools on the list were Jewish-state schools, 32% were National-Religious schools, 7% were in the Arab sector, 3.5% were haredi schools, 2.3% were Druze schools and 2.3% were Bedouin schools.