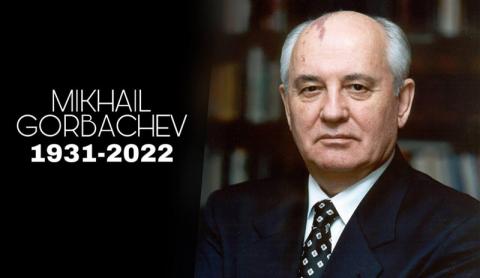 One million ex-Soviet Jews know Mikhail Gorbachev was no saint, and that he opened the gates of the USSR for coldly pragmatic, not humanitarian, reasons. But they remember him with gratitude.

The death of ex-Soviet leader Mikhail Gorbachev has sparked fierce and emotional debates among Russian speakers everywhere: about him, his leadership and the fate of the Soviet empire. Like many other leaders, who won wild popularity abroad for bold politics with local and global consequences, he was far more revered abroad than at home and among his own people. The exception to that dissonance – one group which judges Gorbachev with more affection than many ex-Soviet subjects – are the Jews of the former Soviet Union.

The fall of the Soviet Union was lauded in the West and blessed by the countries in Eastern Europe, but it was also a time of great hardship for ex-Soviet citizens who suddenly lost the only country that they knew. Many had a hard time surviving on the smoking ruins of a once mighty empire; millions decided, or were forced, to leave, gone with the wind. Gorbachev was hardly the cause of that gigantic turmoil, however many – including the rulers of modern Russia – blame him for that.

Among those who remember the first and the last Soviet president with kindness and nostalgia are countless Soviet and Russian Jews, who will be forever grateful to Gorbachev for letting them go.

For decades, Soviet Jews were prevented from leaving the Soviet Union. The short window of opportunity that opened at the beginning of the seventies ended abruptly, and the persecution and prosecution of those who wished to study Hebrew and dreamt of moving to Israel was renewed, with alacrity. Diaspora Jewish community, in both the U.S. and Europe, waged a powerful public campaign for the freedom for the Jews of the Soviet Union, but it bore few fruit before the age of Mikhail Gorbachev, who initiated the opening up of the Soviet Union known as glasnost and perestroika.

When the energetic politician from the city of Stavropol in southern Russia became Secretary General of the Communist Party and moved to the Kremlin in March 1985, it was not immediately clear that just in a few years two unimaginable things would happen: that Soviet Jews would be allowed to be Jews – to study Hebrew, to pray in synagogues and to mark Jewish and Israeli holidays; and that they would be allowed to leave freely.

From his first days in power and until late 1987, Gorbachev and his administration treated the ‘Jewish question’ in the same fashion as his predecessors. In February 1986, a correspondent of the French communist newspaper “Humanite” asked Gorbachev if Soviet Jews were oppressed.

He answered with unusual aggression, denouncing the campaigns on behalf of Soviet Jewry as “part of a vociferous anti-Soviet campaign, a veritable act of psychological warfare” and claiming that “Jews are free and have equal rights with the other nationalities.”

The notorious 1972 decree of the Presidium of the Supreme Council of the USSR, “On the reimbursement of public education costs by Soviet citizens leaving for permanent residence abroad,” which provided a formal reason for refusing Soviet citizens the right of emigration, was only cancelled in 1991.

So what made Gorbachev change his mind and agree to Jewish immigration from the USSR?

Apparently, there were two complementary processes. The first one was the severe economic realities of the USSR, the desire of Gorbachev to liberalize the Soviet economy and the famous Jackson-Vanik amendment of 1974.

This provision limited trade relations between the U.S. and countries that restricted freedom of emigration and other human rights. It was a serious blow to the frail Soviet economy, but Leonid Brezhnev, and his short-lived successors Yuri Andropov and Konstantin Chernenko, were not ready for any kind of compromise despite the heavy economic losses. They feared that if Jews were allowed to leave, everyone else would develop the same desire to part from the USSR. Gorbachev knew his country desperately needed Western, and particularly American, investment, trade and dollars in order to survive.

Eventually, when President George Bush paused the Jackson-Vanik amendment in December 1990, Russian newspapers reported that this move allowed Bush to loan the USSR one billion dollars for the first time since WWII. It was too late to salvage the USSR, but post-Soviet Russia would hardly have been able to survive otherwise.

Another reason for Gorbachev’s fame in the West was his incremental opening up of civil society for Soviet citizens, including the freedom of the press. But the lasting ban on Jewish emigration did not fit into this policy. Despite the unofficial decision to let Jews go, the ossified Soviet bureaucracy continued to release them reluctantly, ensuring the process embittered emigrants’ lives as possible.

Soviet Jews were searched in the train stations and airports; they had to leave pieces of art and family heirlooms, they were stripped of the Soviet citizenship and had to pay 700 rubles a head for that pleasure. While Gorbachev already became “Gorby” in the West, a likeable leader who defused nuclear tensions and liberalized the Soviet economy, at home Soviet Jews still went through seven circles of hell before they were allowed to leave.

And yet – they were now free to leave, while others were free to live their lives as Jews. Well over one million Soviet Jews left the USSR between 1988-1992, and most of them have made their way to Israel. Some had waited for this moment since the seventies, while others seized the opportunity to leave the crumbling empire.

Today, when Russia’s war on Ukraine is raging and the iron curtain is descending again on Putin’s Russia, many Jews of the USSR – a country that seized to exist in December 1991 – thank Gorbachev for setting them free. They know that he was no saint, that there were pressing and coldly pragmatic, not humanitarian, reasons for his change of policy.

Many are critical about his handling of fateful and bloody uprisings against continued Soviet rule in Baku, Vilnius and Tbilisi, in sister-republics that wanted to break free from Moscow. Nonetheless there is a distinct feeling of gratitude on behalf of those who were held hostages by their country for so long but won their freedom thanks to this last Soviet leader.