Midlife crisis is a reality 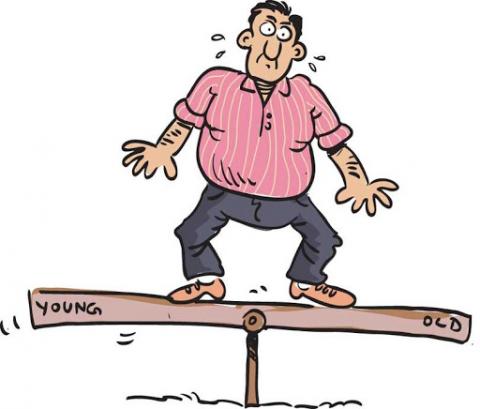 Don’t laugh! The “midlife crisis”, long dismissed as a fanciful fiction, is real, a research paper has concluded. The study by David Blanchflower, a former Bank of England policymaker, found that happiness levels through life took a U-shape, with people at their most miserable when aged 48.

The research found that moods pivoted at the age of 48.3, after which people became happier, with the joy increasing well into their seventies. Mr Blanchflower, 68, is now an economics professor in America, teaching at Dartmouth College in Hanover, New Hampshire. The survey looked at data from 500,000 people in 145 countries. Respondents were asked: “Overall, how satisfied are you with your life nowadays?” Those in their late forties gave the most negative replies.

Professor Blanchflower said he was surprised to find that the results held true for richer and poorer countries, as well as those with longer and shorter life expectancies. He said: “You would have thought in cases where life expectancy is much lower . . . if you look at countries in the bottom 20 and top 20 it is true in all of them. “In a way, it’s something deep in the genes. The fact I see it in every developed country, every member of the European Union. All these developing countries have it. Even monkeys have it. There is something deeply natural going on.”

The existence of a mid-life crisis among great apes was discovered in a 2012 study published in the journal Proceedings of the National Academy of Sciences of the United States of America. The study of 508 apes involved people familiar with the individual animals, which consisted of chimpanzees and orangutans, assessing their ward’s wellbeing at different ages.

The reason for the mid-life dip in happiness remains unclear. Professor Blanchflower said, however, that family structures and people becoming more realistic about what is achievable in life could have some affect. He explained: “People’s expectations get more realistic. They realise that the grass on the other side is not that much greener. When you have children, toddlers make you really happy but adult children are a problem.”

Professor Blanchflower said that the elderly were happy to be healthy and relieved of family responsibilities. “Think of someone who is 70, in a job and healthy,” he said. “They’re happy because they’re healthy, they’re in a job and things could be worse. “I’m sitting here with my grandchildren and my daughter. When my grandchildren scream, my daughter picks them up and goes to another room. My responsibilities are fewer.”

Professor Blanchflower said that people aged 35 to 65, who tended to experience a dip in happiness, needed mental health support during the pandemic. “This is a mental health crisis in lots of ways,” he said. “People with poor mental health are vulnerable to this shock.”

Caprice Bourret, 48, a former model, said this year that she had sought help from a counselling psychologist to deal with stress.

Bourret, who left the television programme Dancing On Ice amid claims of bullying, said: “Initially I was quite reluctant because you have these feelings of shame. But it was the best thing I could have done because she has been like an angel from God.

“She’s really helped me a lot. We all have problems, we all have things going on. You just need to reach out to somebody. You’ve got to talk about it. Don’t keep it in. It’s really destructive. Once you get out of the rut, you look at things in a very positive way.”