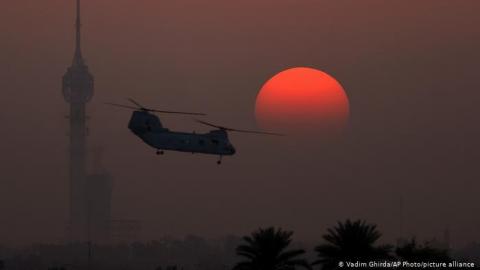 Were Joe Biden’s envoys negotiating with the Iranians about returning the United States to the international nuclear agreement even before he got sworn in? Iran denies it, Washington won’t confirm it, and Israel is scared.

Following Biden’s inauguration on Wednesday, the Iranian nuclear issue becomes the main question preoccupying the world, particularly Israel and the Arab countries. Biden is bringing the Iranian elephant to the White House. He has declared his intention to bring the United States back into the nuclear agreement, from which President Donald Trump withdrew. The new president has made this the most important plank of his anticipated foreign policy – and made it his most important test.

Statements on the election campaign trail tend to get revamped and reformulated when the candidate becomes president. The year 2021 doesn’t look like 2015, when the nuclear agreement was signed, and Biden would face some difficult challenges on the way in rejoining the nuclear pact, among them whether he would agree to lift the sanctions that Trump imposed. In the process, Biden would lose his primary source of leverage on Iran.

But Trump’s 2018 decision to withdraw from the accord and Iran’s resumption of uranium enrichment are only part of the tangled jumble that Trump leaves behind in the Middle East, with his terrifying departure from the White House. The situation in the region leaves the United States and its influence looking very much degraded.

It’s true that the United States is not responsible for the internal rifts and wars in the region. Nor did it cause the Arab Spring, which has metastasized to every Arab country. On the other hand, the Obama administration was shockingly apathetic to Syrian President Bashar Assad’s methodical slaughter of his own citizens. The Obama administration also disassociated itself from Afghanistan after assassinating Osama bin Laden and had a superficial approach to the war in Yemen.

For his part, Trump lacked any policy or strategy. That led the countries in the region, and not only them, to fear his every tweet or caprice and rendered them unable to rely on a stable American policy on which to build their own policies or alliances.

As a result, many Arab countries sought alternative or additional alliances to assure their survival, lest Trump’s next tweet bring a new disaster upon them. For example, Saudi Arabia made Russia one of its business partners, with an option to supply nuclear reactors. And the United States has been absent from the war in Libya, leaving lots of room for maneuver to Russia, Turkey, Egypt and Qatar.

Trump, who was convinced that his personal charisma and his dubious belief that making offers countries couldn’t refuse would enhance his position and by extension, America’s, discovered that heads of state prefer to do business with an administration that has stable policies, rather than the one headed by the guy with the orange hairdo. The close relationship Trump had with Turkish President Recep Tayyip Erdogan wasn’t enough to foil Turkey’s purchase of anti-aircraft missiles from Russia. Trump’s embrace of Saudi Crown Prince Mohammed bin Salman did not turn the Saudi royal who is considered directly responsible for the murder of journalist Jamal Khashoggi into a friend of the United States.

Iraq, where the United States has invested trillions of dollars since the Second Gulf War, considers America as undesirable, and the Iraqi parliament has demanded that the Americans leave Iraqi territory. The Kurds, America’s vital allies in the war against the Islamic State, faced an existential dilemma when Trump announced his intent to withdraw U.S. forces from Syria. This was purportedly based on a doctrine that sought to bring American troops home, particularly from a place that he described as nothing more than “sand and death.” But then it occurred to Trump that a doctrine that isn’t based on the reality on the ground would fail, and American forces stayed put.

In Iraq, he sought to leave troops there for the longer term, even if on a smaller scale. It was not he who dictated that but the political reality in Iraq.

If President Obama pushed the war in Yemen far down his list of priorities, Trump bet on a losing horse. Despite the close military cooperation with Saudi Arabia and the UAE, which has included the sale of weapons, after five years, the war in Yemen has still not been decided and it has become a domestic American political issue.

The crowning glory of Trump’s policy was the pathetic “deal of the century,” was accompanied by a disconnect that he created with the Palestinians. Israel without a doubt was the big winner in the “deal,” which brought about the normalization agreements with the United Arab Emirates, Bahrain, Morocco and Sudan. But the deal didn’t even begin to address the most important dispute, that between Israel and the Palestinians.

It would even be more accurate to say that it planted all the land mines necessary to blow up any future arrangement, including approval for Israeli annexation of territory in the West Bank, recognition of Jerusalem as Israel’s capital, along with the relocation of the U.S. Embassy, and recognition of the Golan Heights as an inseparable part of Israel.

Biden is being handed a demoralizing Middle East file, in which there is more destruction than construction. But in some respects, he won’t be able or may not want to pull up the foundations of what Trump laid.

It’s doubtful that Biden would reverse the recognition of Jerusalem or move the embassy back to Tel Aviv. Syria is apparently a lost cause as far as the United States is concerned and any plan to return to that front would mean confrontation with Russia.

Biden has a well-organized doctrine on the need to promote human rights in the Middle East, but he knows it would involve a dangerous effort that would include blatant intervention in the domestic policies of countries such as Egypt, Saudi Arabia and the UAE – as well as Israel. He has expressed his position on Saudi Arabia on many occasions, particularly his opinion of Crown Prince Mohammed, and has called Turkey’s Erdogan an autocrat.

But would he impose sanctions on Saudi Arabia over the war in Yemen or as a result of Riyadh’s serious violations of human rights? Would he boycott Erdogan?

These are all in addition to the Iranian nuclear issue, which doesn’t only involve restoring the status quo ante and halting Iranian nuclear development but also the image of the United States as a country that dictates global policy. The Iranian issue is Biden’s most important test because it also has far-reaching ramifications of other kinds: on U.S.-EU relations, which reached a low point after the U.S. withdrawal from the pact; on America’s relationship with Arab countries such as Saudi Arabia and the UAE; on Iran’s standing in the Middle East and in the world at large; and on Washington’s relationship with Israel.

This isn’t just another “deal” that may or may not come to fruition. America’s international standing will be determined over Iran.

All of this also raises the question as to whether Biden is seeking to repair the world or whether he will get sucked into the whirlpool that Trump bequeathed him and simply try to fix a few defective parts. In other words, will Biden have a doctrine or just a garage making roadside repairs?