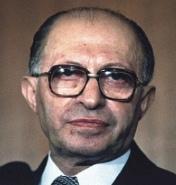 Menahem Begin - zionist resistance leader, parliamentarian and former prime minister. Born 1913 in Brest-Litovsk, Russia. Begin attended the University of Warsaw, graduating in 1935 as magister juri. He was active in Jewish affairs during his student years, including violent confrontations with anti-Semites.
Begin was a member of the socialist Hashomer Hatza'ir youth movement as a child, and at the age of 16, joined the right-wing Betar movement. In 1932 he became a member of Betar's national executive in Poland, and headed its organization department. He traveled across Poland and became known for his oratorical talents. In 1937 he was arrested for participating in an anti-British demonstration. During the Betar World Convention in 1938, Begin clashed with Ze'ev Jabotinsky, his mentor, in demanding a radical policy reorientation with the goal of "conquest of the homeland" by force. He subsequently became involved in illegal immigration to Palestine and supported the activities of the Irgun Zvai Leumi (IZL).

On the eve of World War II, Begin was Head of Polish Betar. After an unsuccessful attempt to cross over into Romania, he arrived in Vilna and established a framework for the Betar refugees. He was arrested in September 1940 by the Soviet authorities and charged with espionage. After he was released from jail following the German invasion of Russia, he enlisted in General Ander's Polish army and went to Palestine within its framework in May 1942. In late 1943 Begin was appointed commander of IZL. He composed the IZL's "Proclamation of Revolt" in February 1944, announcing the opening of the organization's underground campaign against the British mandatory authorities. A reward of 10,000 Sterling was offered for his capture. Living in various places and under different disguises, Begin eluded arrest and continued to direct IZL's operations until the establishment of the state in 1948. In June of that year Begin was nearly killed while on the deck of the Altalena. In August 1948, Begin and fellow IZL High Command members formed the Herut party. He led Herut and later the Gahal bloc in opposition to the Labor-led government coalitions until 1967, and then from 1970 to the 1977 political upheaval when a Likud-led coalition was set up with Begin as Prime Minister.

Begin's parliamentary career was marked by numerous, frequently quoted speeches on political and legal issues, acrimonious debates with David Ben Gurion who refused to consider forming a coalition with Herut, and by active membership in the Knesset Foreign Affairs and Security Committee. In his many speeches before 1967, Begin expressed his rejection of the partition of Eretz Yisrael and referred to Jordan as the "so-called Hashemite Kingdom of Jordan." In 1952, he was suspended from the Knesset for three months during the stormy protests over the Restitution Agreement with the Federal Republic of Germany.

By 1955 Begin had initiated talks with the General Zionists in an effort to form a non- socialist political bloc. Ten years later an agreement was finally reached when Gahal was established by Herut and the Liberal Party of Israel.

On the eve of the Six-Day War (1967) Begin joined the National Unity Government as Minister without Portfolio. He played a significant part in the decision to order the IDF to enter the Old City of Jerusalem. In 1970, with the government's acceptance of the Rogers Proposals for peace negotiations based on Security Council Resolution 242, Gahal left the coalition and Begin resigned his posts.

Toward the 1973 elections, the Likud bloc was set up to include additional political parties besides Herut and the Liberals. The Likud won its first major electoral victory in May 1977, and on June 20, Begin was sworn in as Prime Minister. He appointed Moshe Dayan, who left the Alignment as Foreign Minister – to the disappointment of some members of his own bloc.

After much preparation, including visits to the United States and Romania, Begin hosted Egyptian President Anwar Sadat in Jerusalem in November 1977. Thereafter, he devoted a great deal of his time and effort to negotiating a peace treaty with Egypt. As a result, there were several defections from his Herut Party by members who felt that he had conceded too much in the Camp David Accords and the subsequent peace treaty, even though he had steadfastly refused to give up any part of historical Eretz Yisrael. Together with President Sadat, Begin was awarded the Nobel Prize for Peace in Oslo on December 10, 1979.

Following the resignation of Ezer Weizman as Minister of Defense, Begin assumed the post in May 1980 and obtained cabinet approval for the bombing of the Iraqi nuclear reactor Osiraq on June 7, 1981. In the elections to the 10th Knesset, the Likud had a second electoral victory, and Begin set up his second government, in which Ariel Sharon was appointed Minister of Defense. Begin supported Sharon's plan for a major Israeli operation in Lebanon which was implemented in June 1982, following the attempted assassination of Israel's Ambassador to the United Kingdom.

The intense internal debate of that war, the mounting casualties, and the Sabra and Shatilla massacre carried out by the Phalange, all pressed heavily upon Begin, while the delay in establishing a commission of inquiry to investigate the Sabra and Shatilla affair sharpened public criticism against him. Having suffered three heart attacks, a mild stroke and a broken hip since becoming Prime Minister, and following the death of his wife Aliza in November 1982, Begin became depressed, and finally, on September 15, 1983, tendered his letter of resignation to the President.

In the last years of his life, Begin lived in seclusion. He died on March 8, 1992, and in accordance with his wish, was buried in a simple religious ceremony.