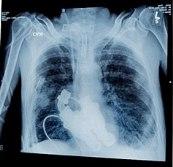 In March of last year, Craig Lewis, 55, was dying from a heart condition that caused build-ups of abnormal proteins, and not even a pacemaker could help save his life. But two doctors from the Texas Heart Institute proposed a revolutionary new solution – install a ‘continuous flow’ device that would allow blood to circulate his body without a pulse. Dr Billy Cohn and Dr Bud Frazier installed the device after removing Mr Lewis’ heart. Within a day, the patient was up and speaking with physicians.
The two doctors had developed the device some time before and had tested it on nearly 50 calves. They removed the animals’ hearts, and by the next day, the calves were doing everything they were the day before – eating, sleeping, and moving – but this time, without a heart pumping blood through their bodies.

No heart: The device uses blades to circulate blood
through the body, replacing the heart

‘If you listened to (the cow’s) chest with a stethoscope, you wouldn’t hear a heartbeat,’ Dr Cohn told NPR last June. ‘If you hooked her up to an EKG, she’d be flat-lined.’ Mr Lewis’ amyloidosis was getting worse, and doctors feared he would die soon without necessary efforts. Doctors grimly said he had 12 hours to live.

So, with the permission of Mr Lewis’ wife Linda, Dr Cohn and Dr Frazier installed the heart in March 2011. 'I listened and it was a hum, which was amazing. He didn’t have a pulse.' Dr Cohn said it contains ‘a moderate amount’ of homemade materials. An incredible short directed by Jeremiah Zagar shows the journey of the world’s first heartless man in stunning detail.

His feature length documentary In A Dream was nominated for two Emmy’s in 2010. According to NPR, thousands of patients – including former Vice President Dick Cheney – have similar ventricular assist devices, though it only assists an already beating heart.

Mr Lewis’ wife was astonished when she tried to listen for his pulse. ‘I listened and it was a hum, which was amazing,’ she told NPR. ‘He didn’t have a pulse.'
The Texas Heart Institute said that prior to having the revolutionary new device installed, Mr Lewis was reliant on a dialysis machine, a breathing machine, and an external blood pump. In March of last year, Texas Heart Institute president Dr James T. Willerson called it ‘medical history in the making.’
The first artificial human heart prototype was successfully implanted in 1969 by Dr Denton Cooley.

Heart Stop Beating is the story of Billy Cohn & Bud Frazier, two visionary doctors from the Texas Heart Institute, who in March of 2011 successfully replaced a dying man's heart with a 'continuous flow' device they developed, proving that life was possible without a pulse or a heart beat.