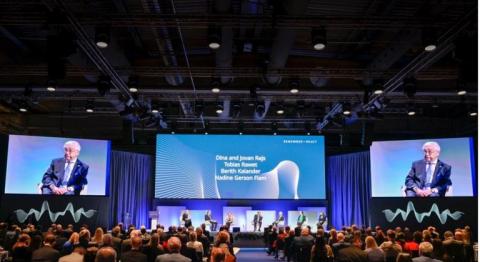 American Jewish Committee (AJC) President Harriet Schleifer today addressed the Malmö International Forum on Holocaust Remembrance and Combating Antisemitism. “I am the daughter of Holocaust survivors,” said Schleifer, recalling how she grew up with the testimonies of survivors. “They are the stories of my extended family, of those who perished in the Holocaust and of those who were fortunate enough to survive and rebuild their lives in America and in Israel and elsewhere.”

“Their message of remembrance always had a dual purpose,” she emphasized. “We must be vigilant to the presence of antisemitism however innocuous it may seem and in whatever form it may take. As Holocaust historians remind us, the Holocaust did not begin with death camps; it began with words.”

Schleifer praised Prime Minster Löfven for convening the forum, and Sweden for its pathbreaking initiatives since the 2000 Stockholm Conference on Holocaust Education and Remembrance.

“Two decades ago, Prime Minister Persson recognized that knowledge of the Holocaust in Sweden and in much of the world was woefully inadequate, and significant measures were required to reverse this trend,” Schleifer stated. “The results of those initial efforts were considerable. For Sweden it meant the publication of a brief history of the Holocaust and its distribution to every household in the country, as well as establishing a center for Holocaust education and research, the Living History Forum.”

Schleifer noted these initiatives “led to the creation of a new international governmental organization, the International Holocaust Remembrance Alliance (IHRA),” which now brings together over thirty countries, and the establishment or expansion of Holocaust museums around the world.

“We commend the Swedish Government for pledging today to build a Holocaust Museum in Stockholm,” she declared.

“While recent surveys conducted in Europe and in the United States show considerable support for teaching the Holocaust and its lessons, they also reveal a lack of knowledge about the Holocaust among large percentages of the population. Most distressing is that today’s younger generation is ignorant about its most basic facts,” she said.

Further, there has been “a resurgence of antisemitism, first in Europe and now in the United States, since the first Stockholm Forum 21 years ago,” Schleifer pointed out.

“At the UN Conference in Durban in 2001, we saw the revival of the Zionism is racism canard. Shortly thereafter, Jews in Western Europe were under siege. Jewish communities suffered lethal attacks from Islamist terrorists and rightwing extremists,” she continued. “Antisemitism crosses the political spectrum. It encompasses Holocaust deniers, conspiracy theorists, and those who promote a boycott of the State of Israel.”

Schleifer stressed that “any genuine effort to remember the Holocaust and its victims must be coupled with the present-day fight against antisemitism.” Praising the growing number of countries, including Sweden, that have endorsed the International Holocaust Remembrance Alliance (IHRA) Working Definition of Antisemitism, she encouraged others to follow. “Only by defining antisemitism can we fully combat it,” she declared.

“American Jewish Committee will continue its century-old mission to combat antisemitism and to protect and promote the security and well-being of Jewish life in Europe, in the United States, and around the world,” concluded Schleifer. “We welcome the pledges brought today by all the governments participating in this forum on Holocaust remembrance and combating antisemitism. AJC is committed to working closely with you and support you in these common efforts.”