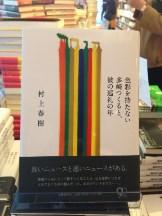 Last month, Haruki Murakami published a new novel in Japan. Before anyone could read it, the novel broke the country’s Internet pre-order sales record, its publisher announced an advance print run of half a million copies, and Tokyo bookstores opened at midnight to welcome lines of customers, some of whom read the book slumped in corners of nearby cafés straight after purchase. But this time, the mania was déjà vu in Japan—a near-replica of the reception that greeted Murakami’s last novel, “1Q84,” three years ago. The response was news to nearly no one. Except, maybe, Haruki Murakami.
“The fact that I have been able to become a professional working novelist is, even now, a great surprise to me,” Murakami wrote in an e-mail three days before the release of “Colorless Tsukuru Tazaki and His Years of Pilgrimage.” He added: “In fact, each and every thing that has happened over the past 34 years has been a sequence of utter surprise.” The real surprise, perhaps, is that Murakami’s novels now incite a similar degree of anticipation and hunger outside of Japan, even though they are written in a language spoken and read by a relatively small population on a distant and parochial archipelago in the North Pacific.

Murakami is a writer not only found in translation (in forty-plus languages, at the moment) but one who found himself in translation. He wrote the opening pages of his first novel, “Hear the Wind Sing,” in English, then translated those pages into Japanese, he said, “just to hear how they sounded.” And he has translated several other American writers into Japanese, most notably Raymond Carver, John Irving, J. D. Salinger, and F. Scott Fitzgerald, whose “The Great Gatsby” Murakami credits as the inspiration behind his entire career.

Motoyuki Shibata, a translator, scholar, and professor at Tokyo University, told me that American fiction becomes an entirely different creature in an alien habitat when presented to Japanese readers. “In the Meiji era, most Japanese read Americans for moral instruction,” he said. “They wanted to learn about concepts of autonomy and individualism and Christianity. They were not seeking entertainment.” American literature arrived in nineteenth-century Japan on the heels of its military—forcing open an isolated nation with modern ideas and technology. Early translators and readers, Shibata said, approached life and literature with a rigid racial hierarchy, with the Caucasians at the top, the Japanese in the middle, and the remaining ethnicities and colors at the bottom. Anything written by whites from the West was deemed inherently superior, just because Japanese looked up to them.

After the Second World War, novels like “The Old Man and the Sea,” “The Call of the Wild,” and “Moby-Dick” entranced Japanese readers yearning for a future of heroism, naturalism, and reason in the wake of the chaotic militarism and destruction they’d endured. Instruction was still a part of the appeal, but heroism and identity moved to the forefront. The transformation to a more purely literary engagement with American fiction, with readers appreciating and actually enjoying American prose over what it could teach them, occurred in 1975. That’s when Kurt Vonnegut and Richard Brautigan were translated into Japanese and introduced a sense of humor, absurdity, and social criticism voiced in vernacular prose.

Kazuko Fujimoto’s translation of Brautigan’s best-known work, “Trout Fishing in America,” was a revelation to Japanese readers like Shibata and Murakami. “That was the first time,” said Shibata, “instead of looking up to the author and the characters, I looked level at them. I felt characters finally began to talk like real human beings, though of course with their own oddities and eccentricities.” He continued: “Ms. Fujimoto’s Japanese was often quirky and zany, but that quirkiness and zaniness was in accord with the feel of the originals. She broke the rules of everyday Japanese, but the way she did it was more fun, and she made the Japanese language richer, instead of torturing the poor thing as some older translators did.”

Brautigan and Vonnegut are far more famous and well-read in Japan today than American stalwarts like John Updike, Philip Roth, and Toni Morrison. Readers are more likely to buy books based on entertaining storytelling and plots, the quality and sound of the Japanese prose, and the reputation of the translator. “I sometimes don’t think I understand American readers,” Murakami told me in Boston several years ago when trying to parse why a novel that he loved, Tim O’Brien’s “The Nuclear Age,” was widely panned in the States. “I sometimes think they’re missing something.”

To fill that gap of understanding, Shibata and his friend Ted Goossen, a translator of Japanese literature and professor at Toronto’s York University, have for three years been publishing an annual English-language literary magazine called Monkey Business International: New Writing from Japan. (I am a contributing editor.) The project was born out of frustration: Why was Haruki Murakami the only contemporary Japanese writer anybody outside of Japan knew? Goossen urged Shibata to cull material from his own Japanese-language literary quarterly, the original Monkey Business. Murakami is a contributor, of course, but his writing takes on new colors alongside stories and poems by his Japanese contemporaries (younger and older), classic Japanese literature, and even Japanese manga.

Still, I can’t help but wonder if the translation of literature, where the strengths and even personality of the original are embedded in the language, is futile, however heroic. “When you read Haruki Murakami, you’re reading me, at least ninety-five per cent of the time,” Jay Rubin, one of Murakami’s longtime translators, told me in Tokyo last month, explaining what he says to American readers, most of whom prefer to believe otherwise. “Murakami wrote the names and locations, but the English words are mine.” Murakami once told me that he never reads his books in translation because he doesn’t need to. While he can speak and read English with great sensitivity, reading his own work in another language could be disappointing—or worse. “My books exist in their original Japanese. That’s what’s most important, because that’s how I wrote them.”

But he clearly pays attention during the process of translation. Rubin said that the first time he translated a Murakami novel, “The Wind-Up Bird Chronicle,” he phoned the author several times a day to nail word choices and correct inconsistencies. “In one scene, a character had black-framed glasses. In another, the frames were brown. I asked him: Which one is it?” I found Rubin’s anecdote revealing. The Japanese language acquires much of its beauty and strength from indirectness—or what English-speakers call vagueness, obscurity, or implied meaning. Subjects are often left unmentioned in Japanese sentences, and onomatopoeia, with vernacular sounds suggesting meaning, is a virtue often difficult if not impossible to replicate in English.

Alternatively, English is often lauded for its specificity. Henry James advised novelists to find the figure in the carpet, implying that details and accuracy were tantamount to literary expression. Is it possible that Japanese and English are two languages so far apart that translators can only reinvent their voices by creating entirely new works? Last week, Shibata, Goossen, and a lineup of Japanese and American writers were in New York to host a series of events to introduce the third and latest English version of Monkey Business, as part of the PEN World Voices Festival. At their Asia Society dialogue, Goossen quoted Charles Simic’s take on the magical absurdity of translating poetry: “It’s that pigheaded effort to convey in words of another language not only the literal meaning of a poem but an alien way of seeing things … To translate is not only to experience what makes each language distinct, but to draw close to the mystery of the relationship between word and thing, letter and spirit, self and world.”

Murakami would likely agree. In a recently published essay on his decision to render “The Great Gatsby” in Japanese, the sixty-four-year-old author reveals that it became something of a lifelong mission. He told others about his ambition in his thirties, and believed then that he’d be ready to undertake the challenge when he reached sixty. But he couldn’t wait. Like an overeager child unwrapping his presents, he translated “Gatsby” three years ahead of schedule. Translation, he writes, is similar to language and our relationship with our world. It, too, needs to be refreshed:

Translation is a matter of linguistic technique… which naturally ages as the particulars of a language change. While there are undying works, on principle there can be no undying translations. It is therefore imperative that new versions appear periodically in the same way that computer programs are updated. At the very least this provides a broader spectrum of choices, which can only benefit readers.

Roland Kelts
Roland Kelts is the author of “Japanamerica.” He divides his time between New York and Tokyo.