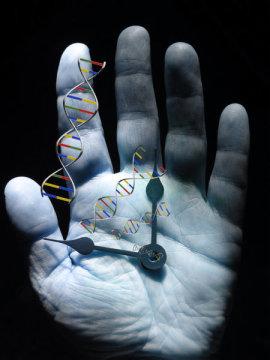 In 2013, Google cofounder and CEO Larry Page announced the formation of a new Alphabet entity dedicated to solving the pesky puzzle of mortality. Since then, the billion-dollar longevity lab known as Calico—short for California Life Company—has been trying to tease apart the fundamental biology of aging in the hopes of one day defeating death.

The hyper-secretive research venture has released few details about what it actually does inside its Silicon Valley lab, but there have been hints. One of the company’s first hires was renowned geneticist Cynthia Kenyon, a UC San Francisco researcher who 20 years ago doubled the lifespan of a lab roundworm by flipping a single letter in its DNA.

Shortly after joining Calico, Kenyon recruited a UCSF bioinformatics postdoc named Graham Ruby. He didn’t want to dig into worm genetics or study the company’s colony of long-lived naked mole rats. He wanted to first ask a much broader question: how big a role do genes play, anyway, in determining how long someone lives? Other scientists had tried to ask that question before, with conflicting results. To clear things up would require getting much, much more data. So Calico went to the biggest family history database in the world: the consumer genetics and genealogy firm Ancestry.

In 2015, the companies inked a research partnership to investigate the human heredity of lifespan, with Ruby leading the charge to sift through Ancestry’s vast forest of family trees. What he found by analyzing the pedigrees of more than 400 million people who lived and died in Europe and America going back to 1800 was that although longevity tends to run in families, your DNA has far less influence on how long you live than previously thought. The results, published Tuesday in the journal Genetics, is the first research to be made public from the collaboration, which ended quietly in July and whose terms remain confidential.

“The true heritability of human longevity for that cohort is likely no more than seven percent,” says Ruby. Previous estimates for how much genes explain variations in lifespan have ranged from around 15 to 30 percent. So what did Ruby uncover that previous studies had missed? Just how often amorous humans go against the old adage that “opposites attract.”

It turns out that through every generation, people are much more likely to select mates with similar lifespans than random chance would predict. The phenomenon, called “assortative mating,” could be based on genetics, or sociocultural traits, or both. For example, you might choose a partner who also has curly hair, and if the curly-haired trait winds up being somehow associated with long lifespans, this would inflate estimates of lifespan heritability passed on to your kids. Same thing for non-genetic traits like wealth, education, and access to good health care. People tend to choose partners in their same income bracket with the same terminal degree, both of which are associated with living longer, healthier lives.

The first hint that something other than genetics or a shared family environment might be at work came when Ruby tried looking at in-law relatives. His analysis started with a set of family trees comprising 400 million individuals. The data had been cleaned, de-identified, and stitched together by genealogists and computer scientists at Ancestry based on subscriber-generated public information. Using the basic laws of heredity—everyone inherits half their DNA from one parent and half from the other, repeated across generations—Ruby’s team looked at how related two people were and how long they lived. They investigated parent-child pairs, sibling pairs, various cousins, and so on. Nothing much surprising popped out there.

But when Ruby looked at in-laws, things started to get weird. Logic suggests you shouldn’t share significant chunks of DNA with your siblings’ spouse—say your brother’s wife or your sister’s husband. But in Ruby’s analysis, people connected through a close relative’s marriage were almost as likely to have similar lifespans as people connected through blood. “I sort of kick myself for being surprised by this,” says Ruby. “Even though no one has shown the impact of assortative mating to such an extent before, it aligns well with how we know human societies are structured.”

The research could affect the entire field of longevity studies. Ruby says it doesn’t invalidate any prior work on identifying individual genes involved in aging or age-related diseases, but it does suggest that finding more of those genes is going to be much harder going forward. To find them, scientists will need huge cohorts to reach sufficient statistical power. That shouldn't be a problem for Calico, which in addition to the family trees also had access to de-identified DNA information from millions of Ancestry's genotyped customers as part of the research partnership.

The companies have at least one more paper on the genetics of longevity currently under peer review. A spokesperson for Ancestry said that in accordance with the original terms of the agreement, the partnership between it and Calico concluded with the submission of the research covering these findings. Calico is free to pursue any leads that emerged from the analysis, but the company isn't saying anything about what those might be at the moment. (A Calico spokesperson declined to comment on the Ancestry collaboration beyond the results of today's publication.)

For now, the big takeaway seems to be that humans have more control over how long they live than their genes do. It’s all the other things that families share—homes and neighborhoods, culture and cuisine, access to education and health care—that make a much bigger difference in the set of numbers that might one day grace your tombstone.

Maybe that’s why Ancestry’s chief scientific officer Catherine Ball says the company has no plans to offer a longevity score in any of its DNA testing products any time soon. “Right now a healthy lifespan looks to be more of a function of the choices that we make,” she says. She points to places in the data where lifespans took big hits—for males during World War I, and then in two waves in the latter half of the 20th century as men and then women took up a cigarette habit.

“Don’t smoke, and don’t go to war. Those are my two pieces of advice,” she says. And maybe make time to exercise. Ball already has a Tuesday morning workout penciled in her calendar. This time, she says, she won’t be canceling it at the last minute.