The long view with Russia 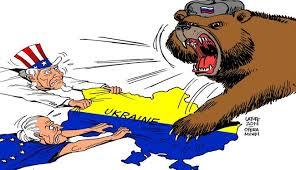 In an ordinary year, not all that much happens at the annual Munich security conference. NATO defense ministers murmur earnest platitudes. Experts furrow their brows. But this is not an ordinary year.

This year, the normally staid audience laughed out loud at the Russian foreign minister, Sergei Lavrov, who seemed, at one point, to question the legality of German unification. Some of the room also applauded loudly when Angela Merkel, the German chancellor — just back from an apparently fruitless peace mission to Moscow — restated her view that “there is no military solution” to the conflict in Ukraine. But when Malcolm Rifkind, the former British foreign secretary, asked her how she would stop Russia without military force, another part of the audience applauded. Even watching online, the conundrum in the room was clear: Everyone agrees that the Russians were lying, and no one believes Russian promises of a cease-fire. But nobody agrees on what to do about it.

Clearly, the real debate about Ukraine and Russia has yet to begin, by which I don’t just mean the “should we arm Ukraine?” debate. This is an appealing discussion, not least because it appears to pit the United States (Mars) against Europe (Venus). But fundamentally, it’s a red herring. The armaments debate is an argument about short-term tactics, not long-term strategy — and it ignores the real nature of the Russian game.

Before last year, eastern Ukraine had no history of ethnic conflict. Well-armed “separatists” emerged on the scene only when Russian President Vladimir Putin ordered them there. The “civil war” that ensued is an artificial conflict, run by Russian security and enhanced by a sophisticated pan-European disinformation campaign. It will last as long as the Russians want it to last. Lt. Gen. Ben Hodges, commander of the U.S. Army in Europe, has told the Wall Street Journal that the Russians have deployed their most modern air defense and electronic warfare systems, weapons “way above and beyond” anything a rebel army could deploy.

The point of the war is not to achieve a victory. The point is to prevent the emergence of anything resembling a prosperous, European Ukraine, because such a state would pose an ideological threat to Putinism. Following this logic, even a German-brokered cease-fire will not bring “peace,” but rather a so-called “frozen conflict,” following an old KGB design: Transnistria in Moldova, South Ossetia in Georgia, now Novorossiya in Ukraine. Once it is up and running, Russia can set up a new secret police service in Novorossiya, create new bases for the Russian army, perhaps train terrorist squads there. Mysterious bombs have already exploded in Kiev and Kharkiv . In December, six bombs went off in Odessa alone.

This can all happen very quickly, within days or weeks, which is why the argument about “arming Ukraine” is almost beside the point. Yes, over time, the Ukrainian army could be reinforced: That might keep the borders of the new Russian puppet state from expanding further. But even the United States can’t deliver weapons fast enough to push the most sophisticated Russian weaponry out of Ukraine anytime soon. Short of sending the 82nd Airborne division into Donetsk, it’s hard to see how even the most high-tech U.S. aid can prevent the establishment of Novorossiya, since in practice it already exists.

What the West needs now is not merely a military policy but a comprehensive, long-term strategy designed to reinforce Ukrainian statehood and integrate Ukraine into Europe over many years. We could begin training not only the Ukrainian military but also the security services, which were devastated by the previous Ukrainian president. We could push far more forcefully for economic reform and support it with real financial commitments. We could treat this as a very long-term project, as Merkel suggested on Saturday, build a Berlin Wall around Donetsk in the form of a demilitarized zone and treat the rest of Ukraine like West Germany.

We could recognize the real danger Russia poses to Europe, not only as a source of violence but also as a source of political and economic corruption. We could impose much harsher, much deeper sanctions. We could cut Russia out of the international payments system. We could enforce our own laws and stop turning a blind eye to Russian money laundering, most of which takes place in European capitals. The city of London and the gnomes of Zurich might pay a price for the loss of Russian clients. But that price will still be far lower than the potential costs of doing nothing.

For what is the alternative? Ukraine collapses, and Putin is emboldened, as he was after his invasion of Georgia in 2008. He begins planning the next “frozen conflict.” If he does so in a NATO state, perhaps Lithuania or Estonia, a much wider and even more damaging European conflict would follow. We don’t want a new Cold War — but even that would be preferable to a new World War. And if we don’t come up with a serious strategy to prevent one, that’s what we’ll get.