The Limits to Growth 2.0 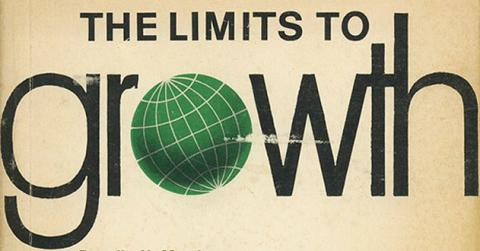 On the eve of one of the twentieth century’s most notable economic shocks — the 1973 oil crisis — an influential group of researchers released a now-iconic report entitled The Limits to Growth. The work, which received wide attention and proved controversial, painted a bleak picture of humanity’s future. Left unchecked, it said, economic and population growth would deplete the planet’s resources and cause economic collapse around 2070.

More than four decades later, the report’s main conclusions are still valid, according to a group of independent researchers who have updated the work using more-sophisticated analytical tools. Like the 1972 report, the latest work was commissioned by the Club of Rome, a group of liberal scientists, economists and industrialists that was founded in 1968.

The update, released on 17 October in Rome for the club’s 50th anniversary, makes for a sobering read. Although its conclusions are not quite as drastic as those of the original report, it says that humanity finds itself in something of a catch-22.

Business-as-usual or accelerated economic growth will mean that the world will not be able to meet the United Nations’ sustainable development goals (SDGs) — a suite of social, environmental and prosperity targets for 2030 — the authors conclude. And even if governments were to substantially strengthen what the authors call “conventional” policies to meet social goals such as the eradication of poverty and hunger, and achieving quality education for all, they would be in danger of missing environmental goals.

“There is high risk for pushing the Earth’s life supporting systems beyond irreversible trigger-points by 2050,” the report says. “It is quite disturbing to see that we’re still facing the same dilemma the Club of Rome described almost 50 years ago,” says Julia Steinberger, an ecological economist at the University of Leeds, UK.

The original report was a quantitative analysis based on a computer model that calculated likely future outcomes for the world’s economy. Criticism focused mainly on the authors’ assumptions about how long natural resources would last.

Some economists called the book’s pessimistic conclusions “irresponsible nonsense”, while others criticized the validity of the model — World3, a dynamic economic model developed by US economist Dennis Meadow, co-author of the book — that the authors had used to predict energy consumption, pollution and population growth.

The latest version of the report was compiled by researchers with the Stockholm Resilience Centre and the BI Norwegian Business School in Oslo. They used an Earth-system model that combines socio-economic and biophysical variables, alongside a wealth of historical and new socio-economic data, to draw up their conclusions.

This model’s elements interact with the passage of time, and it is much more robust than World3, says Steinberger.

The researchers found that the world is currently on track to meet only 10 of the 17 SDGs by 2030. Efforts to satisfy social SDGs with conventional policy tools will come at the price of unsustainable or wasteful use of natural resources such as water, land and energy. Hence, environmental goals, including stabilizing climate, reducing pollution and maintaining biodiversity, could fall by the wayside, they say.

To prevent human civilization from more environmental damage than it might be able to endure, the authors call on world leaders to consider policies that they deem unconventional. Only more extreme economic and behavioural changes will allow the world to achieve all 17 SDGs together, the authors say.

These policies might include rapid phase-out of fossil fuels , greater use of family planning to stabilize populations, and actively encouraging the reduction of wealth inequality so that the richest 10% of people take no more than 40% or so of income.

The report is a vindication of the Club of Rome’s initial world view and a welcome alternative to mainstream economics’ focus on growth and equilibrium, says Steinberger. “Most of The Limits to Growth’s original conclusions still hold true,” said Johan Rockström, a sustainability researcher at the Stockholm Resilience Centre and a co-author of the report, at its release. “This is scientifically satisfactory, but for societies it’s not.”