Lessons of the Holocaust 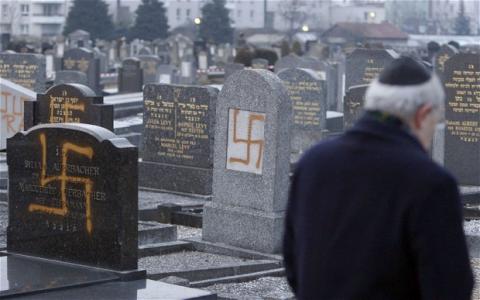 73 years after the camp's liberation, with nationalism and racism rising and our our democratic societies appear to be regressing, we must re-engage with the lessons of the Holocaust and ask ourselves if we've become apathetic to human suffering.

73 years ago, the remaining 7000 prisoners at the Auschwitzconcentration and extermination camp was liberated by the Red Army. Right before their escape, the Germans blew up those gas chambers and crematoria which were still operational. Nazi soldiers forced over 100,000 prisoners deep into Germany in order to continue using them as a slave labor force. Those who survived spent all their lives as witnesses for those who perished. Today, Primo Levi, Elie Wiesel, Wadysaw Bartoszewski, Israel Gutman, Simone Weil, Imre Kertesz and many others are no longer among the living. We, the post-war generation, remain more and more alone with the burden of their experience.

It is difficult to deny that we are still unable to manage this burden properly. And I am not referring to defending the facts. The entire modern world is now living more and more as if they have not learned much from the tragedy of the Shoah and the concentration camps. The world was supposed to look different after WWII. Global dialogue and co-operative institutions, such as the United Nations, were being built. After the war, it seemed that the world would have to be re-thought.

In Western Europe the process of states, nations and societies coming together developed to a high degree, and became the European Union. This partnership was based on a common market which, in place of past models of co-existence formed around the illusive balance of power, made the co-operation and developing interdependence of its member states its main foundations.

New legal frameworks of crimes against humanity were developed and accepted and the UN drew up a definition of the crime of genocide. There was recognition of the role of non-governmental organizations and their full expansion after the war enhanced the influence of civil society on government. The shape of those informal, autonomous social structures no longer imitated the paramilitary culture that was so common before the war among different kinds of brotherhoods, corporations and associations. The Church and other religious organizations felt the new spirit of ecumenism.

Due to the tragedy of the loss of so many civilians, this war was not like any other war. Auschwitz became its most prominent symbol. But, at the time, there was not enough courage for real justice. Among approximately 70,000 SS members working in concentration and extermination camps, only about 1,650 were punished in post-war trials. Furthermore, the punishment was, in the majority of cases, irritatingly and obviously not enough – a few years of imprisonment, often suspended. It should thus not surprise anybody that many of them later shared a feeling of impunity.

Today we see that these post-war efforts – however legitimate and well thought-out they seemed at the time – did not withstand the test of time. We are unable to efficiently react to new manifestations of genocidal frenzy. Starvation and death caused by continuous conflict in central Africa are not treated as priorities by our governments. The arms trade and exploitation of underpaid labour overwhelm the poorest regions of the world. The United Nations has ceased to guarantee any kind of hope. The European Union is devoured by internal apathy.

And at the same time, our democracies are suffering from an increase in populism, national egotism and new forms of extreme hate speech. The remilitarization of relationships between people desecrates our streets and cities. Have we really regressed that much in the last two or three generations?

In two years we commemorate the 75th anniversary of the liberation of Auschwitz, (the culminating point of the 15th International Holocaust Remembrance Day), we should ask ourselves several questions to ensure this day does not become yet another commemoration event, with the same words and phrases being repeated, slogans that fail to resonate despite the backdrop of remains of concentration and extermination camps.

What is happening to our world and to us? Has memory ceased to constitute a commitment? And if it is hope that dies last, then where else is it to be rooted, if not in memory? Do we really have to complain about a lack of vision in order to justify our shallowness in reinforcing the good? Does lack of authority justify the promotion of vanity? Should the lack of statesmen allow for the emergence of voices that are not mature enough to handle their own responsibility? Have the results of opinion polls and social media memes become a permanent dictate of our choices? Does the market really need only those who are convinced of their inherent right to convenience and who do not realize that they also have duties, however uncomfortable they are?

Have we become that efficient at smothering our responsibility to act and instead sit, complacently, behind the door of our “incapacity to do anything” even with respect to the most awful human tragedies? In a culture that tries to live without being conscious of death, is there still any place for the commemoration of victims? Does the cacophony of individual and equally important stories – to which everyone is naturally entitled – still entail a liberating moral message? Does the total of human self-satisfaction constitute the most efficient measure of good in this world?

Seeing how absurdly unmatched to modern challenges education has become, why are we unable to change its direction? Have we become too enamoured of a transactional educational system that prepares students only for quantitative achievements? Is the proportion between the number of lessons like mathematics compared to classes such as ethics, the knowledge of using mass media wisely, civics and the knowledge of internal threats for society, the ability to organize civil opposition; the skills to create aid projects – really justified?

Why does the history we teach remain only a safe study of the past, whilst matching all present circumstances, without presenting any distinct correlations with the current world and the increasingly insecure future?

We do not want to answer these questions ourselves, so it is easier to put them away, ridicule or discredit them. And it does not matter what is happening in Congo, Myanmar or in a neighbouring district or stadium. This does not change the fact that our children –  the future of everything we should care for – learn more about sacrifice, dignity, responsibility or ideals from the new Star Wars film than from ourselves or at school.

Apathy has embraced us not because we do not see great visions for the future, but because we have veiled the image of our shared, common – even the closest – past.

This apathy is so deep that today – maybe for the first time in the history of mankind – while assessing the course of events in so many places, distant and close to us, it is so difficult for us to distinguish what still constitutes peace from what has already become war. Memory and responsibility do not match anymore. This is how our entire civilization is now, at its own request, deprived of its own experience.

Are we going to let Auschwitz fade away and become part of history, just as we need it the most, just as populism, xenophobia, anti-Semitism and other racist ideologies intensify in many places all over the world? Should we launder it of its moral lessons and reposition it, toothless and sterile, in the mathematics section?