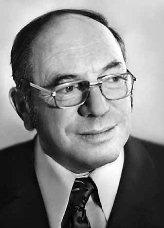 Leonid Vitalyevich Kantorovich was born on January 19, 1912, in Petersburg, Russia. He was educated at Leningrad State University. At the age of 18 (1930), Kantorovich received his Ph.D. in mathematics. From 1934 to 1960, he was a professor in Leningrad. From 1961 to 1971, he headed the department of mathematics and economics in the Siberian branch of the U.S.S.R Academy of Sciences, and from 1971 until 1976, Kantorovich worked at the Moscow’s Institute of National Economic Planning where he headed the research laboratory.
Kantorovich was a Soviet mathematician and economist, who worked for the government. He was given the task of optimizing production in a plywood industry in the Soviet’s Laboratory of the Plywood Trust. Kantorovich determined that the problem of distributing raw materials was that one had to consider many limitations in order to maximize a linear function of distribution. He came up with the mathematical technique known as linear programming (1939), to be used in economic planning. In his book The Mathematical Method of Production Planning and Organization, Kantorovich illustrates that all problems of economic distribution can be understood as maximizing a function dependent on limitations.

In his most successful book, The Best Uses of Economic Resources, Kantorovich shows that every economy had to be concerned with using prices to control distribution of goods and material resources.

Leonid Kantorovich and Tjalling Koopmans have both done their most important scientific work in the field of normative economic theory, i.e., the theory of the optimum allocation of resources. As the starting point of their work in this field, both have studied the problem - fundamental to all economic activity - of how available productive resources can be used to the greatest advantage in the production of goods and services. This field embraces such questions as what goods should be produced, what methods of production should be used and how much of current production should be consumed, and how much reserved to create new resources for future production and consumption.

As they have formulated the problems and described the connection between production results and productive inputs in new ways, these two scholars have been able to achieve highly significant results. Early in his research, Professor Kantorovich applied the analytical technique of linear programming to demonstrate how economic planning in his country could be improved. Professor Koopmans, for his part, has shown for instance that on the basis of certain efficiency criteria, it is possible directly to make important deductions concerning optimum price systems.

Professor Kantorovich is today the leading representative of the mathematics school in Soviet economic research. He made his first contributions in the field of economic research as early as 1939 when he wrote an essay on the meaning and significance of an efficient use of resources in individual enterprises. In a number of publications, one being his book, The Best Use of Economic Resources, Professor Kantorovich has analyzed similar efficiency conditions for an economy as a whole, and there, particularly demonstrated the connection between the allocation of resources and the price system, both at a certain point in time and in a growing economy. An important element in this analysis was to show how the possibility of decentralizing decisions in a planned economy is dependent on the existence of a rational price system, including a uniform accounting interest rate to form a foundation for investment decision.

Professor Koopmans has in a series of works, primarily, Analysis of Production as an Efficient Combination of Activities, developed the so-called activity analysis. Within this theory, new ways of interpreting the relationship between inputs and outputs of a production process are used to clarify the correspondence between efficiency in production and the existence of a system of calculation prices. This shed a new and interesting light on the connection between the normative allocation theory and the general equilibrium theory. During the sixties, Professor Koopmans studied the problem of finding criteria for an optimum growth rate for an economy. In this work, he has paid particular attention to factors which, in a more fundamental sense, determine the value individuals and society place on comsumption at different times - such as population growth and technological advance. In addition to the contributions he has made to the normative theory of allocation of resources, Professor Koopmans has done distinguished work in the field of econometric methods.

To sum up, Professor Leonid Kantorovich and Tjalling Koopmans, largely independent of one another, have renewed, generalized, and developed methods for the analysis of the classical problem of economics as regards the optimum allocation of scarce resources.