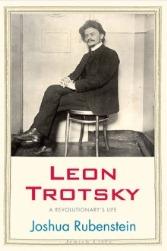 I first heard the name Trotsky when I was seven years old. My grandfather, a Jewish tailor from Belarus who arrived in the goldene medine and pulled himself up by his bootstraps to own a men's suit factory in New York, had just gotten a swept-back haircut. He called it a Trotsky. This was the beginning of my learning that among American Jews, everyone knew Trotsky—and everyone's opinion of him was extreme. You either loved him or loved to hate him.
The Trotsky name next entered my life was when I was bar mitzvah age and sitting at a family dinner. The question around the table was, how Jewish was Trotsky? The issue of whether or not a person was Jewish was an obsession in our family. As I have come to learn, it was no less an obsession for countless other Jewish families, not to mention Adam Sandler; and it is exactly the issue that pervades Joshua Rubenstein's new book, "Leon Trotsky: A Revolutionary's Life", part of the Jewish Lives Series by Yale University Press.

The first question is whether a book about Trotsky belongs in a Jewish Lives Series in the first place. True, the other figures in the series are a strikingly diverse group of Jews, from King Solomon through Rashi, Maimonides, Rav Kook, Martin Buber, and Primo Levi to Hank Greenberg, Sarah Bernhardt, and Leonard Bernstein. But, unlike all of these figures, Trotsky said that Judaism played no role in his life; indeed, he fervently denied it as a feature of his identity.

Rubenstein addresses this problem head-on. Unlike other Trotsky biographers, he does not simply take the man at his word. Instead, Rubenstein looks beyond Trotsky's declarations to his actions and the ways others viewed and acted toward him. And in these areas, the question of Trotsky's Jewishness is not quite so unambiguous.

The early life of Lev Davidowich Bronstein, who would become Leon Trotsky, was not so different from the lives of other late-19th-century Ukrainian Jews. But at the age of nine, he was sent to cosmopolitan Odessa for schooling. By the time he was 18, he had adopted the radical politics that would bring him a life of serial jails, revolutions, and exiles. His first wedding was performed by a rabbi—and that, in terms of Jewish events in Trotsky's adult life, was that. To the contrary, it was internationalism, with its repudiation of national and religious distinctions, that became Trotsky's cause. It was the theme of his pointed writings and fiery speeches, which finally led Stalin to oust him from the Communist Party's Central Committee in 1927 and deport him from the Soviet Union in 1929.

Yet this very internationalism made anti-Semitism particularly repugnant to Trotsky. It was a persistent theme in his writings and conversations. He never hid his Jewishness; certainly his detractors reminded him, and others, of it throughout his career.

At one point during World War I, Trotsky was deported by France to Spain—which he hated, since he knew no one there and could not speak Spanish. The Spanish authorities, feeling likewise, deported Trotsky to the United States. He arrived in New York on January 13, 1917. Almost immediately, he met Abraham Cahan, editor of the Yiddish-language Forward. The Forward was socialist and, at the time, the largest-circulation newspaper in the United States. That was how the internationalist Trotsky ended up writing columns in Yiddish.

He wrote about internationalism, of course; and Trotsky's version of internationalism enraged the Forward's readers. Trotsky could not understand how the Jewish workers of America could be so attached to their new country. He wrote that they had a choice between internationalism and the false consciousness that produced their patriotism. He was astonished to see that America's Jews chose patriotism.

We do not know how the dialogue between Trotsky and American Jewry would have gone in the long run. He wrote only four columns for the Forward; just 10 weeks after he arrived in America, the tsar was overthrown and he returned to Russia. But for those 10 weeks, Trotsky lived among Jews. He stayed in the Bronx, on East 164th Street and Stebbins Avenue. He could have dined anywhere, but he chose to make the Triangle Dairy Restaurant on Wilkins Avenue his eatery and took his meals there every day. The patrons were all Eastern European Jews, speaking the languages—Yiddish, Russian, German—in which Trotsky felt at home.

The waiters were Jewish, too. They called him Leo Fonfatch, a derogatory Yiddish word for nose (not because he had a large or stereotypically Jewish nose, but because of his high, nasal voice). Trotsky refused to tip them: He believed that a worker should earn a living wage and that tips were insulting. But the waiters found the absence of tips even more insulting. Trotsky was handed off from waiter to waiter; then, they refused en masse to serve him. Finally, Trotsky and the waiters came to a modus vivendi: Trotsky would eat and leave quickly, so as not to deny the waiters their tips from other customers.

Rubenstein ends the book with Trotsky's assertion, shortly before his brutal murder, that he would die "an irreconcilable atheist." Rubenstein shows that this statement did not fully settle Trotsky's Jewish question. Yet Judaism had little bearing on Trotsky's thought, and he made little specific contribution to the Jewish world. Given the legacy of Communism, perhaps Judaism should be counted fortunate to have escaped the worst of his influence.