The Last Man in Russia 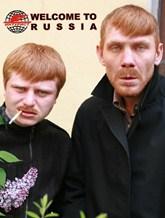 A journey through a drunken, decaying Russia in search of a priest who once tried to stem the flow of vodka.

That the Russians are "giuen much to drunkenesse" has been a cliche of western accounts of their country since the early modern era. As Richard Turbervile put it in 1568, "Drinke is their whole desire, the pot is all their pride, / The sobrest head doth once a day stand needfull of a guide." Oliver Bullough's The Last Man in Russia gives the old moral expostulations a modern twist. He blames drink for the demographic and psychological collapse of the Russian nation, for the empty and rotting settlements that scatter the country, the catastrophic rates of accidental death, and the dismal record of life expectancy and infant mortality. Only Moscow, boom-time city, "sucking up" resources from all over the country, offsets the general picture. But the prosperous capital cannot salvage the country from the spiritual malaise that makes people drink. "The Russian nation is shrivelling away from within," Bullough claims.

Fortunately, treating readers to a sermon on Russia's dysfunctionality is only part of what Bullough has in mind. The homily is accompanied by an exemplum: an account of the life of Father Dmitry Dudko, a remarkable evangelising Orthodox priest of the 1960s and 1970s. From a village background, he was one of the first cohort to be allowed a theological education in the seminaries and academies reopened after Stalin's concordat with the Orthodox church, and the restoration of the Moscow Patriarchate, in 1943. This education was in turn interrupted, after Dudko was denounced by a fellow student, and the would-be priest had a stint in the camps, serving his sentence at Inta, a small town in the Komi Republic founded by convict labour.

Eventually graduating from the Moscow Theological Academy, Dudko emerged during the 1970s as a major figure in religious renewal. At his church on the fringes of Moscow, he organised unprecedented, and barely legal, large-scale discussions of moral and spiritual issues – including abortion and family breakdown as well as excessive drinking – that were troubling his parishioners. The resulting dialogues were so popular, with a catchment stretching far beyond the church's location, and outside the community of believers too, that Father Dmitry was moved to more distant parishes. In 1980 (during the period of political repression that accompanied the Soviet invasion of Afghanistan and the mounting of the Moscow Olympics), he was arrested. Then followed the tragic reversal of fortune that makes the finale to Bullough's book, and which explains Dudko's near-disappearance from recent history. The advocate for inter-faith dialogue had become a ranting antisemite and extreme nationalist.

Dudko's life is not told in traditional biographical style. Rather, it becomes the motivating force behind Bullough's own voyage of discovery, as he visits the dismal places where Dudko worked and talks to some of those who knew him. Sitting in the former Lenin Library, he works his way through a pile of wartime leaflets published by the occupying German forces, and is able to demolish the Brezhnev-era charge that Dudko had published poetry in these mouthpieces of collaboration.

With an engaging capacity for self-mockery, Bullough sketches the pratfalls of the accidental traveller. He struggles across Bryansk province to the village where he thinks Dudko was born, only to find that the priest's birthplace was somewhere quite different with a nearly identical name, and more than a day's journey away. Reaching Inta, he has to haggle to secure a dreary room in the "Northern Girl" hotel for the price that Russians would pay, rather than the inflated rate charged to otherwise non-existent foreigners. He is at first treated with derision when he makes inquiries at the local museum: the director "demanded my passport and my press accreditation […] she asked me what I already knew […] 'Well then, you know more than us,' she said coldly, and told me there was nothing more she could do to help."

The dusty concrete blocks of pattern-built small towns, the empty village houses with their unromantic recent detritus ("A wardrobe still held some cheap summer dresses, and a row of their matching belts hung from a wall"), and the cosy clutter of former dissidents' offices and flats are all evocatively described. Bullough is good at conveying the way in which travel in Russia confuses and frustrates the visitor, but also how unexpected acts of kindness restore morale.

The Last Man in Russia ends with vignettes in which Bullough sees hope: a small church whose congregation projects the sense of community feeling that he misses in a country that he otherwise considers to be empty of trust; the election protests of 2011-2012; and an encounter, in the St Paraskeva Cemetery in Moscow, with a woman whose husband was saved from vodka suicide by Father Dmitry.

There is the sense, though, of an emotional, rather than intellectual resolution: this is the seesaw of feelings, from euphoria to desperation and back, which one encounters in some of Chekhov's stories, rather than the emergence of a logically pursued argument. Focused on himself, Bullough's story is not, in the end, very reflective. If it were, it might ask whether the current British interest in the drunken, decaying culture of Russia has anything to do with the malaise of another post-imperial country beset by delusions of grandeur: a place whose national church is in disarray, where social unity has been sacrificed to the profit motive, and where binge-drinking is a recognised social ill.