Kindness will help you live longer 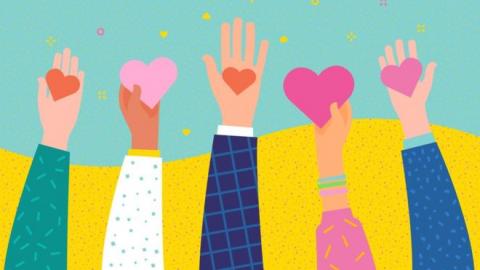 What can kindness do for you? Give you a warm glow perhaps, or a feeling of well-being? While that may be true, scientists and academics at a new research centre say it can do much more - it can extend your life.

The staff at UCLA's Bedari Kindness institute are ready for the jokes. "We look at the scientific point of view. We aren't sitting around in circles, holding hands. We're talking about the psychology, the biology, of positive social interactions," says Daniel Fessler, the institute's inaugural director.

The notion of kindness has made headlines recently. It was a key part of former president Barack Obama's eulogy of veteran US Democrat Elijah Cummings, following his death last month. "Being a strong man includes being kind. There's nothing weak about kindness and compassion," he said. "There's nothing weak about looking out for others. You're not a sucker to have integrity and to treat others with respect."

And then there was Ellen DeGeneres calling for kindness when speaking about her surprising to some friendship with George W Bush: "When I say, 'Be kind to one another,' I don't mean only the people that think the same way that you do. I mean be kind to everyone. It doesn't matter.'"

Ahead of World Kindness Day this week, what does it actually mean to be kind - and why is it important? This is what the experts want to examine. And they are deadly serious about it. After all, it could be a matter of life and death, they say.

Mr Fessler's work has looked at how people can be motivated to be kind simply by witnessing acts of kindness - and working out who is affected by this "contagious kindness". "I think it's fair to say we live in an unkind age right now," he says. "Both domestically in the United States and around the world, what we are seeing is increasing conflict between individuals who hold different political views or belong to different religions."

Kindness, he says, is "the thoughts, feelings and beliefs associated with actions intending to benefit others, where benefiting others is an end in itself, not a means to an end". And unkindness, on the other hand, is "intolerant beliefs, the lack of valuation of others' welfare".

It's something familiar to anyone who's experienced trolling on social media. While the practice is "nothing new", Mr Fessler says "people are more likely to be aggressive, less likely to value others' concerns and welfare, the more anonymous they are".

The institute was founded thanks to a $20m (£16m) grant from the Bedari Foundation, set up by philanthropists Jennifer and Matthew Harris. Based in UCLA's social sciences department, it aims to help both members of the public and also to inspire leaders. Mr Harris says research was needed "to understand why kindness can be so scarce in this modern world" and to "bridge the divide between science and spirituality".

Some of the projects at the institute include:

It is also providing students with mindfulness training, and those in underserved Los Angeles communities. Mr Fessler says that it's known that bad stress - the kind where you can't do anything about a challenging situation, as opposed to the "good" stress from challenging but satisfying activities, like rock climbing - is bad for you. "Living with people who treat you, at best, with disregard or a lack of concern, and at worst with open hostility, is bad for you. It shortens your life, quite literally," he says. "Conversely, both receiving kindness from others, and providing kindness, both of those things are the antithesis of this toxic stress situation. And they're good for you."

Even seemingly trivial interactions, like a barista at a coffee shop smiling and asking how you are, can improve people's wellbeing. "Engaging in kindness, contemplating how you can be kind to others, lowers blood pressure. It has therapeutic benefits," he says. "There are benefits for treating depression and anxiety."

Columbia University doctor Kelli Harding has been examining the phenomenon in her recent book, The Rabbit Effect. She says: "It helps the immune system, blood pressure, it helps people to live longer and better. It's pretty amazing because there's an ample supply and you can't overdose on it. There's a free supply. It's right there."

Explaining the title of her book, she says: "I heard about this study of rabbits, back in the 1970s. One set had better outcomes and they wanted to find out what was going on. It turned out the rabbits doing better were under the care of one really kind researcher. "As a doctor, I was absolutely shocked. It felt like there was an urgent message."

Kindness, she says, can "turn a lot around and help people navigate things in their world".

It's often easier to be kind to others than to ourselves, she says. "There are so many ways to foster kindness to ourselves and to others. In the workplace, at school and at home, being compassionate leads to better outcomes," she says. "In medicine, the technology may be getting better but you can never replicate the kindness of a supportive caregiver. The connection between mental health and physical health is so critical."

Tips for living a kinder life

Darnell Hunt, dean of the UCLA social sciences division, said he wanted the institute to be an antidote "in the midst of current world politics, violence and strife", that is "rooted in serious academic work". "I think we're living in a time where there's a direct need to step back and explore the things that make us human and that have the potential to lead to more humane societies," he says. "We are living in a moment of political polarisation in the United States and elsewhere, with increased urbanisation leading to less direct interactions between people."

When people see kind acts, they are inspired to replicate those acts, he says - but we are still trying to understand the mechanisms of kindness. "It's not a case of us being here in an ivory tower. We want to translate this research into how people in the real world can use this to create policy and make a difference."

This "historical moment is the right time to do this", he says. "We are in one of the most diverse states in a diverse country. A lot of problems in LA echo problems elsewhere in the world. If you can solve them here, we can see what can be done around the world."