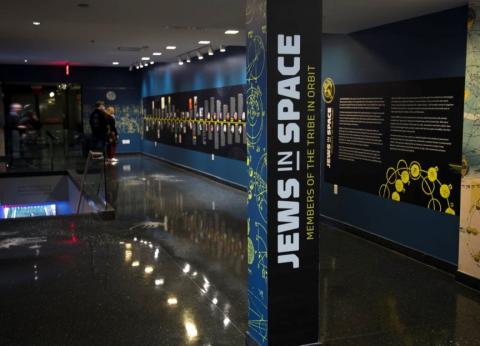 A new exhibition debuted in New York last week that explores the connection between Jews and something outside of our own world: outer space. At the heart of “Jews in Space: Members of the Tribe in Orbit” is the story of the Jewish relationship with the solar system, rooting all the way back to the BCE era.

Visitors are taught about the connection between astronomy and Judaism, rabbinical figures who studied lunar activity and the various Jewish astronauts who participated in space exploration programs and missions. On display at the exhibit, presented by the Center for Jewish History in collaboration with the Yivo Institute for Jewish Research, are roughly 40 artifacts, including rare 18th- and 19th-century rabbinic texts on astronomy and cosmography in Hebrew, German and Yiddish; Judaica taken into space; rare science-fiction periodicals; and other materials from literature and pop culture.

Melanie Meyers, the center’s senior manager for reference and outreach and the exhibit’s co-curator, said the exhibit “traces all the various accomplishments in these different areas of talking about space, thinking about space, going into space — and that Jews were involved in all of them. People don’t necessarily know that.”

The initial idea, related Meyers, popped up while she and her husband were watching an episode of “Star Trek.” “He was the one who came to me and said, ‘I can’t believe you’ve never done an exhibition on Jews in science fiction.’” She eventually approaching Yivo’s Edward Portnoy, who became the co-curator. “‘Let’s toy around with a bunch of astronomy books,’” she recalled. “Once we started talking about it, we were just rolling.” Portnoy told JNS that when Meyers approached him with the idea, he was already working on another exhibition about rare rabbinical material from the 16th, 17th and 18th centuries, which included many books on astronomy written in Hebrew.

He suggested that they do a “much broader exhibit” about Jews in space that would include his findings connected to astronomy, cosmology and its deep roots in the Jewish culture. Together, they decided to pull the name for the exhibit from the popular 1981 Mel Brooks comedy film “History of the World, Part I,” which featured a parody trailer called “Jews in Space” that eventually inspired the movie “Space Balls.” Quite appropriately, an autographed photo of Brooks, which personally belongs to Meyers, is on display at the exhibit.

A large chunk of the exhibit focuses on the Jewish connection to modern-day science fiction and pop culture. Materials include original covers of Amazing Stories, the first magazine composed solely of science fiction, started in 1926 by Jewish inventor Hugo Gernsback, who coined the term.

A number of Jewish science-fiction writers are represented in the exhibit, as well as a sci-fi story written in Yiddish in 1929, and various images of the main characters in the “Star Trek” television series, Capt. James T Kirk and Mr. Spock, played by Jewish actors William Shatner and Leonard Nimoy, respectively.

Perhaps the most interesting items featured are the Judaica taken into space in 1993 and 1996 by Jewish astronaut Dr. Jeffrey Hoffman. Hoffman’s inaugural space mission in 1985 made him the first Jewish American male astronaut in orbit, and during his 1996 mission with the Space Shuttle Columbia, he became the first astronaut to bring and read from the Torah in space.

The astronaut personally carried with him a silver dreidel, a traveling menorah, silver Torah yad (or “pointer”) and a mezuzah. Other items that were part of his PPK (Personal Preferred Kit) include a silver Kiddush cup, a Havdalah set and a plaque with the Hebrew prayer for safe travels written on it. All artifacts on display were donated by Hoffman. “It was wonderful that he lent them to us,” said Meyers. “We picked them up from him personally in Massachusetts. “We got to spend some time with him and learn about his experience being a Jewish astronaut, what the artifacts meant to him . . . I was sort of overcome [with emotion]. I barely make it out of New York City, and these things made it into orbit.”

According to Portnoy, the public response has been overwhelmingly positive. “I personally enjoyed the pop culture side of it. As much as it was interesting to see the religious artifacts and what the Jewish astronauts brought with them to the space trips, my favorite part was seeing how the Jews influenced pop culture and sci-fi,” Miriam Spritzer, 32, said.

Professor David N. Myers, president and CEO of the Center for Jewish History, said the exhibit is meant to showcase that “just as Jewish history spans a huge span of time, so, too, does it range across a vast expanse of space. And it turns out that Jews have been preoccupied with space for thousands of years.”