Jews and Crime in Medieval Europe 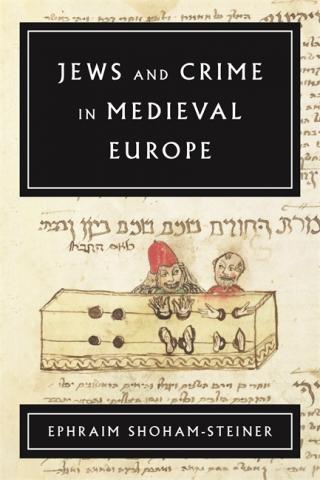 In the Hebrew manuscript collection of the Bibliothèque nationale de France in Paris, among the formulas for potions – both medicinal and magical – hides an unusual document. If you study it you might learn how to rob a house in broad daylight, even if the owners are there watching.

It turns out that thieves in the 15th century – Jewish ones, too – brought with them all sorts of weird stuff. “The thieves that enter houses take with them the hand of a dead man,” the manuscript reads. “They put it in the middle of the house and then all the household members tremble and fall asleep.”

The criminals then light four candles and place them in the four corners of the house. They then sprinkle specially prepared diamond dust onto the spellbound occupants. In the next stage, while “the thieves go about their business they take the dead hand and place it on the master of the house’s heart and they ask him where the keys and the silver and gold are and he reveals all that he knows.” The charm works and the “dead hand” serves as a truth serum – and paves the way for the perfect burglary.

Prof. Ephraim Shoham-Steiner, an expert in medieval Jewish history at Ben-Gurion University of the Negev, found this manuscript while doing research for his new English-language book, “Jews and Crime in Medieval Europe.” Shoham-Steiner, who in the past has also studied Jewish lepers as well as the mentally and physically challenged among medieval Europe’s Jews, now tells us about con men, thieves and even a few murderers.

“It’s no secret that non-Jews, during the Middle Ages and into the early modern and modern periods, often portrayed Jews as criminals. While these accusations were for the most part unfounded, in other cases the accusations weren’t altogether baseless,” Shoham-Steiner says.

The new book reveals the many cases in which Jewish criminals basically engaged in outsourcing: They had their non-Jewish neighbors carry out the crimes, whether theft or all the way to murder. “When a Jew wanted to eliminate another Jew, he would order an assassination from the outside,” Shoham-Steiner says.

This was for a whole range of reasons. While some simply wanted to get away with their crime, others were aware of the physical strength and moral failings of some of their non-Jewish neighbors. After all, some of the Jews had felt the blows of riots and pogroms on their own skin.

In a manuscript left by Rabbi Gershom Ben Judah (better known as Rabbeinu Gershom), one of Judaism’s greatest scholars and the leader of Ashkenazi Jews in the 11th century, Shoham-Steiner found interesting testimony on how things really worked. A legal case that reached the rabbi described how non-Jewish thieves coordinated the planned theft, including the target and means to obtain it, with their Jewish bosses: Reuven (Reuben) and Shimon (Simon) – the classic pseudonyms used in Jewish legal literature throughout the generations.

Sometimes, the Jews presented a request for a certain object to the non-Jewish criminals. Later, when the green light was given, the thieves took to the road, left town and returned with the loot – along with an estimate of its market value. In other cases, the criminals presented their wares to the Jews only after the act, and the latter chose the items they desired. Payment sometimes came in advance, sometimes after the fact – on a case-by-case basis.

No trading in abominations

Shoham-Steiner’s research reveals that at certain times, Europe’s Jewish communities made sure to warn Jewish thieves about trading in stolen Christian holy books and ritual items. This of course wasn’t a moral issue but a fear for the good name of the Jewish community – and they certainly didn’t want to stoke any outright hostility. One method was a threat of excommunication against anyone who traded in ”abominations,” as they were called in the idiom of the times.

In more serious cases, the Jewish community asked the local ruler to deal with the lawbreakers in their midst. This was the case in England in 1252, when King Henry III was forced to decide in a case in which a Jew named Gedalya was accused of stealing an etrog – a citron used for ritual purposes during Sukkot – from the Winchester synagogue. The ruling and sentence have never been found, so we can only guess whether the poor Jew – who may have desired the expensive fruit for its supposed enhancement of fertility – was freed or imprisoned.

In the records from the royal court in York from 1208, Shoham-Steiner found a case of a Jewish woman who was murdered. It seems that the man who complained about the crime was the murderer himself.

The sources for the new book were mostly medieval Jewish manuscripts such as the Responsa literature providing the rulings by Jewish legal scholars, which also includes quotations from Jewish courts. The language was Hebrew – sometimes it can be read effortlessly today and sometimes it’s Talmudic Hebrew that’s hard to decipher.

“The Jews had autonomy to manage their own affairs, and the outside society that lived alongside them didn’t care about the way they decided their internal matters,” Shoham-Steiner says.

Back in the world of witchcraft, one fascinating figure in the book is Rabbi Judah ben Samuel of Regensburg, known as Rabbi Judah the Pious (Yehuda Hehasid), who lived in Germany at the end of the 12th century and in the early 13th century. Among the many things he was known for were his supernatural powers and prowess as a mystic; supposedly he could see back into the past and predict the future. The famous rabbi could use these powers to find stolen items and capture the thieves – sometimes in the act.

According to one story, one night under the cloak of darkness, thieves broke into the rabbi’s house of all places. Rabbi Judah, who was well aware of his own powers, received the criminals with open arms and gave them a free hand to steal whatever they liked. After they left, loaded down with the stolen goods, the rabbi closed the door and put his magic to work. Very soon the unfortunate criminals were frozen in place, in the middle of the street – along with everything they had stolen.