Jews Along the Silk Road 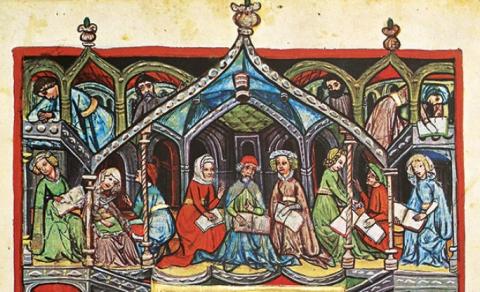 How do Jews live between Baku and Berlin, between Tashkent and Tehran, Dushanbe and Tel Aviv? How did experiences of convival living with Muslim, Christian or secularized majority and minority populations shape Jewish biographies and identities?

The majority of Jews living in Germany and Europe today come from areas of the former Soviet Union. Most migrated from European parts such as Belarus, Ukraine or Russia, but some arrived from the southern and eastern republics in the Caucasus and Central Asia – areas that lie on the routes of the historic and new Silk Road.

During the three-day international conference, we would like to approach the little-known stories of flight, deportation and migration between Europe and Asia, the experiences of neighbourhood and religious everyday practices of (post-)Soviet Jews from the Caucasus and Central Asia. The focus is on social and cultural entangled and liminal spaces, places of encounters and in-between positions of people living as minorities and migrants in multi-ethnic and multi-religious societies.

How are these experiences and biographies shaped by Soviet Orientalism and colonialism, antisemitism and racism, and how do they relate to Jewish experiences in Iran, Turkey, Morocco or India? We are looking at the memories and experiences of living together in the Soviet and global South and are asking how these stories change the narratives of Jewish and post-migrant life in the 21st century in Germany and Europe.

The opening lecture will be given by Prof. Dr. Atina Grossmann (The Cooper Union in New York City).

The conference welcomes 20-minute scholarly and artistic papers on the following topics:

Abstracts (between 250 and 300 words) and a short bio should be sent to: akademieprogramme@jmberlin.de by 15 March 2021.

Approval of proposals will be announced by 1 May 2021. The selected speakers will be asked to send their finalized presentations by 15 August.

The travel and accommodation costs will be covered by the organizing institutions according to the relevant guidelines.
The conference languages are German and English (with simultaneous translation).

A conference of the Jewish Museum Berlin in cooperation with the Centre for Eastern European and International Studies (ZOiS, Berlin) and the Viadrina Center B/ORDERS IN MOTION at the Europe-University Viadrina Frankfurt (Oder).

The complete conference program will be available on this page from 15 August 2021.