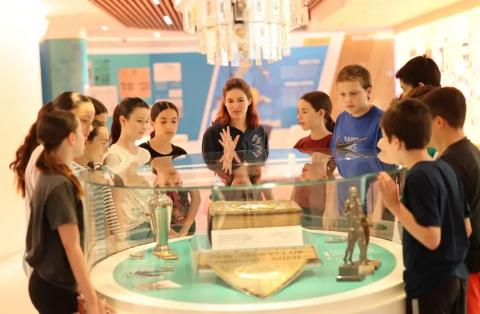 The Jewish Sports Museum will open on October 7 in Kfar Maccabiah near Ramat Gan. The museum, which covers an area of 1,500 square meters, will display over 1,000 authentic and rare items, from the 19th century to the present day, which tells the story of Jewish sports.

In addition, in honor of the festive opening – and only on the Sukkot holiday, visitors will enjoy a sports fair that includes a huge complex of inflatables, a Gymboree for toddlers and sports activities.

Among the exhibits in the museum, it will be possible to see the surfboard which Gal Fridman won the gold medal at the 2004 Athens Olympics; The judo suit with which Yael Arad won a silver medal at the 1992 Barcelona Olympics; the European Basketball Championship Cup won by Maccabi Tel Aviv in 1977; Baseball glove of Sandy Koufax – one of the greatest baseball pitchers in history; Ágnes Keleti’s trophy – one of the greatest Jewish athletes of all time; and original team shirts of Eran Zahavi and Yossi Benayoun.

“The tour of the museum takes visitors on an exciting and inspiring journey that begins in the 19th century, progresses to the present and continues to the future of Israeli sports. Visitors to the museum, children and adults alike, can expect an exciting and powerful experience based on three significant anchors: sports, Judaism and Israeliness. We invite families to come visit us during the holiday of Sukkot, spend time together with the children and enjoy a new and unique experience and the abundance of possibilities that the museum offers.”

This station exhibits the vision behind Jewish sports at the beginning and the inseparable connection between the establishment of the Zionist movement for Jewish sports and the creation of a new nation at the end of the 19th century.

The space of time at this station passes from the end of the 19th century to the beginning of World War II. In the first stage, visitors discover the development and the establishment of the first Jewish sports clubs in Europe and the Land of Israel, and will discover a display of medals, certificates, photos and a wide range of clubs that led to the establishment of Maccabi - a worldwide movement in 1921.

Jewish sports encountered dilemmas before World War II and most of its activity stopped during the Holocaust. Visitors will encounter stories of senior Jewish athletes, who faced the question of whether to participate or forgo the 1936 Nazi Berlin Olympic Games.

The station that tells the story of the Jewish athletes in the Holocaust, and symbolizes the victory of the spirit, is one of the most exciting stations in the museum. Visitors will be exposed to the stories of Jewish athletes who were murdered in the Holocaust, such as Fredy Hirsch - an educator and athlete who founded "Maccabi Hatzair" branches in Czechoslovakia and coached children in the Theresienstadt ghetto and Auschwitz.

Visitors will also meet Jews who survived the Holocaust thanks to being athletes, such as the journalist Noah Klieger - a boy from Belgium who came to Auschwitz, and through sports - managed to survive the war, due to being part of a group of prisoners who were the “pet boxers” of the Auschwitz commanders.

The establishment of the Israeli State is also the time for the revival of Jewish sports in Europe and especially in South America. During this period, the Maccabiah Games were revived in Israel, the Maccabiah Village was established in Ramat Gan, and the torch race that began in 1944 received a national character in Israel and also began to travel around the world.

This station will bring visitors together with items related to athletes, films about the Maccabiah Games in Israel and the Maccabiah International Games in Europe, South and North America.

Jewish and Israeli sports, like the state of Israel, also experience crises and bumps. The murder of 11 Jewish victims of the 1972 Munich Games was a breaking point for sports in Israel, and also for the Jewish athletes who represented other countries in Munich, such as Mark Spitz.

This station will show a video of Israel Prize laureate Esther Roth-Shahamorov and Lee-L Korsiz, which will illustrate overcoming the crises.

A Healthy Mind in a Healthy Body

The Jewish Sports Hall of Fame will bring visitors together with the great Jewish athletes of recent decades, with their possessions, and with the moments in which they won world fame.

The museum will be open between October 7-17 and will have multiple daily tours and options for private group tours. For more information and for tickets, please visit www.leaan.co.il