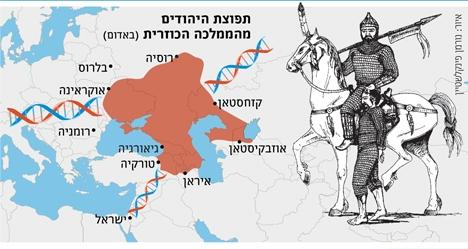 In his search for Jewish ancestry, Eran Elhaik says he has discovered that some Ashkenazis originated in the Khazar empire, not the kingdom of Judah.

"Just imagine a group of blind people who encounter an elephant for the first time in their lives. They place their hands on it and touch it in order to understand what kind of animal it is. But each of them feels a different part of the elephant's body so that, in the end, each of them gains a different impression as to what sort of animal it is." Using this ancient Indian parable, geneticist Dr. Eran Elhaik tries to illustrate one of the most controversial issues in the study of history: the origin of the Jewish people.

"For years, scholars have suggested various explanations as to where the Jews come from," says Israeli-born Elhaik, and lists the different theories proposed over the past century to solve the puzzle. However, each explanation has provided only a partial clue and, to make matters worse, all the explanations contradict one another.

In our telephone interview, Elhaik, who does not hide his light under a bushel, describes his study as a "breakthrough" and says he has provided the scholarly foundations for an ancient and controversial theory claiming that European or Ashkenazi Jews are descendants of the Khazars. The Khazar Empire consisted of various peoples (Iranians, Turks, Slavs, Caucasians and others ), and ruled over a vast territory stretching from the Black Sea to the Caspian Sea during the medieval period. According to this theory, the Khazars converted to Judaism in the eighth century and their descendants are the "European" or Ashkenazi Jews who live today in Israel and the Diaspora.

The commonly accepted narrative considers the Jews to be descended from residents of the Kingdom of Judah who were exiled and returned to their native land - the modern-day State of Israel - only after thousands of years of exile. In contrast, this new study supports the theory that the Jews are descended from different peoples who lived in various regions in the Mediterranean Sea Basin, and who converted to Judaism in different eras. According to that theory, the story of the exile from Judah, the exilic life led by Jews in the countries of the Diaspora and their continual longing for their native homeland can be considered a myth.

"My research refutes 40 years of genetic studies, all of which have assumed that the Jews constitute a group that is genetically isolated from other nations," notes Elhaik. His study is based on comprehensive genetic data published in other studies. In the absence of such data on the Khazars themselves, Elhaik - following a procedure commonly used by researchers in his field - relied on figures relating to populations that are genetically similar to the Khazars, such as Georgians, Armenians and Caucasians. Elhaik says "they have all emerged from the same genetic 'soup.'"

After conducting numerous analyses utilizing various techniques, some of which have never been employed before, the researcher discovered what he describes as the Khazar component of European Jewry. According to his findings, the dominant element in the genetic makeup of European Jews is Khazar. Among Central European and East European Jews, this component is the most dominant in their genome, accounting for 38 and 30 percent, respectively.

What other components constitute the genome of European Jews?

Elhaik: "[They are] primarily of Western European origin, which is rooted in the Roman Empire, and Middle Eastern origin, whose source is probably Mesopotamia, although it is possible that part of that component can be attributed to Israeli Jews."

The latter datum is of considerable importance because it "reconnects" European Jews to Israel. However, that connection amounts to only a small part of the makeup of the genome, and that figure is not statistically significant enough to establish that the origin of the Jews is the Kingdom of Judah.

According to Elhaik's study, there is a genetic continuum linking the Jews of Iran, the Caucasus, Azerbaijan and Georgia with the European Jews. In other words, it is possible that these groups share common ancestors - namely, the Khazars.

The geneticist goes on to explain that, among the various groups of European and non-European Jews, there are no blood or family connections: "The various groups of Jews in the world today do not share a common genetic origin. We are talking here about groups that are very heterogeneous and which are connected solely by religion."

The bottom line, he claims, is that the "genome of European Jews is a mosaic of ancient peoples and its origin is largely Khazar."

Similar research conducted by other scholars, some of whom are celebrated professors in Israel and other countries, presents very different results. Last summer, for example, Oxford University Press published "Legacy: A Genetic History of the Jewish People," which attempted to sum up the various studies that have related to this subject over the past two decades. The author, the Yeshiva University professor Dr. Harry Ostrer, who teaches in the departments of pathology, genetics and pediatrics in the university's Albert Einstein College of Medicine, argues that all Jews have a common genetic origin and similar genetic characteristics. According to Ostrer, this common origin is not Khazar but rather Middle Eastern. Thus, in line with his theory, the Jews are descendants of residents of that region who resided there thousands of years ago, were exiled and recently returned to their native land - that is, modern-day Israel.

Unlike Elhaik, Ostrer found no significant evidence attesting to any connection between the Jews and the Khazar kingdom. Moreover, from the genetic standpoint, the Jews, he argues, are closer to the Palestinians, Bedouin and Druze than to the Khazars. His findings lend a solid basis to the argument that the Jews originated in the Middle East.

Elhaik, who disputes Ostrer's study, claims that previous research on the subject "has no empirical basis, sometimes even contradicts itself and offers conclusions that are simply not convincing."

"It is my impression," he adds, "that their results were written before they began the research. First they shot their arrow - and then they painted the bull's-eye around it."

Unlike other researchers, Elhaik does not believe in the existence of a uniquely Jewish gene: "Each human being is a genetic amalgam. No population group has ever lived in total seclusion from other groups." He also refutes the claim that the genome of many Jews contains a Middle Eastern component, proving that the Jews originated in that region: "The majority of Jews do not have the Middle Eastern genetic component in the quantity we would expect to find if they were descendants of the Jews of antiquity.

"Ironically," observes Elhaik, "some of the Khazars were of Iranian origin. I think it is safe to assume that the Iranians have made a not-inconsiderable contribution to the Jewish mosaic."

Haaretz has in recent weeks turned to a number of scholars from Israel and abroad, including historians and geneticists, and asked them what they thought of the new article. The historians refused to respond, arguing that they had no expertise in the field of genetics. For their part, the geneticists were unwilling to cooperate for other reasons. While some of them simply ignored the request from Haaretz, others claimed they were unfamiliar with the specific discipline of population research or too pressed for time to respond.

The only scholar who agreed to give his opinion (and did so with great enthusiasm ) was Tel Aviv University professor of history Shlomo Sand, author of the best-seller, "The Invention of the Jewish People," published in Hebrew in 2008 by Resling Press (an English translation by Yael Lotan was published by Verso in 2009 ). On the bookshelves in his small office at TAU are translations of his book, now available in 22 languages.

Sand has some tough words of criticism for geneticists looking for Jewish genes: "For an ignoramus like me, genetics had always appeared to be crowned with a halo - as a precise science that deals with quantitative findings and whose conclusions are irrefutable." When he began reading articles on the subject of the Jews' origin, he found he had been mistaken: "I discovered geneticists - Jewish geneticists - whose knowledge of history ended at what was necessary for their high-school matriculation exams. Which is how I would describe my knowledge of biology. In high school they had learned that there is one Jewish nation, and, on the basis of this historical narrative, they reconstruct their scholarly findings."

"Their search for the origin of a common gene in order to characterize a people or a nation is very dangerous," says Sand. With several reservations, he cites the example of the Germans, "who also searched for a common component of blood ties." The historical irony, he emphasizes, is expressed in the fact that "whereas, in the past, anyone who defined the Jews as a race was vilified as an anti-Semite, today anyone who is unprepared to define them as a race is labeled an anti-Semite.

"I used to think," Sand adds, "that only in such disciplines as history and literature can facts be given various interpretations, but I then discovered that the same thing is done in genetics. It is very easy to showcase certain findings while marginalizing others and to present your study as scholarly research. In general, specialization in genetics can create an incredibly high level of ignorance in history."