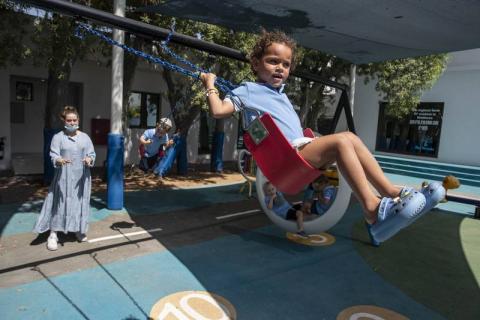 The Gulf region’s first and only Jewish nursery has recorded a large increase in the number of pupil enrolments in less than two years. Mini Miracles, nestled in Dubai's Jumeirah residential neighbourhood, has grown from one pupil to 45 since opening last year. Levi Duchman, the first resident chief rabbi in the UAE, said they hoped to have about 200 pupils enrolled by the end of this year. A new Jewish educational campus will also be established on Saadiyat Island in Abu Dhabi early next year.

“We're just about to break ground and are building the newest educational centre very soon in Abu Dhabi,” he said. “I could definitely say the number one reason that enables Jewish families to move to the UAE, besides business opportunities, is the fact they are guaranteed a Jewish education.”

Mini Miracles in Dubai was founded and built by Alec and Sonia Sellem, Jewish residents of the UAE, right after the Abraham Accords were signed in 2020. The aim was to provide a British curriculum campus that incorporated Jewish values.

Since then, Ms Sellem said more Jewish families have moved to the UAE, with one of the factors drawing them in being access to religious education.

The small campus, which has a strong focus on charity and kindness, also hosts a Sunday school which is attended by a little more than 100 pupils aged between 2 and 12, where children are taught Jewish history, culture and Hebrew.

Shortly after the Abraham Accords were signed in 2020, Rabbi Duchman helped to establish the UAE’s first Jewish community centre. The nursery followed shortly after. Since then, he said the UAE now has one of the fastest growing Jewish communities in the Arab world, now with more than 5,000 people.

“Today, we have many thousands, it's a huge community and it is continuing to grow,” he said. “We have people moving here from all over Europe, Russia, Ukraine, Australia, Israel, so it's a very diverse community.”

He added that it is safer to be a Jew in the UAE than in many European countries. “As our community continues to prosper and thrive, we welcome to our schools and educational institutions Jewish children and people from all over the world, living, visiting and doing business here in the UAE, to learn and experience Jewish values and traditions,” he said.

The new centre that will be launched in Abu Dhabi will also function as a nursery and an educational campus similar to the one in Dubai, offering Sunday school and support for those wishing to learn Hebrew. “We want to offer the best quality of Jewish education and to compete with schools in London, New York and in Tel Aviv,” Rabbi Duchman said. “Our after-school programme and Sunday school is geared more towards the Jewish community and includes members from France, UK, Israel, America and places in Asia.”

Mini Miracles Nursery, which hosts pupils until foundation stage two, serves only kosher food and follows days off according to Jewish holidays and festivals. “This year, we have foundation stage one and two, and by 2024, we plan to go on to year one [and] build a full-fledged Jewish school,” he said. “The challenge is you cannot build a school in one day. “It's not a question in my mind that here in the UAE we will [someday] have one of the highest levels of Jewish education worldwide.”

Ms Sellem said that for her and her husband, starting the nursery stemmed from a realisation that there could be no Jewish community without a core educational facility. “The centre of a community is always children,” she said. “You can have all the synagogues in the world, you can have all the kosher food in the world, if you don't have proper education for children, you will never have a proper community. “It’s such a historical moment. There's a Jewish nursery in the UAE and now there are so many pupils. “There's such a high pace of Jewish life in Dubai."

She said that at their current rate of growth, the school may need to move to another location as it continues to expand.