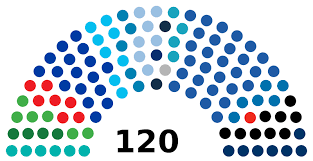 Israel’s right-wing Jewish voter base has grown from 46 percent before the April 2019 election to 62% now, ahead of November’s vote, according to an analysis of self-reported political affiliation by the Israel Democracy Institute. The growth has been mostly at the expense of the political center, although the left has also taken a dip

From 2019 to 2022, with four elections having taken place and a fifth scheduled, the size of the political center dropped by nine percentage points and the number of left-identifying citizens by six points, to 24% and 11%, respectively.

Analyzed by Or Anabi, the IDI survey has for years asked Israelis of voting age where they place themselves on the political spectrum, based on a 1 to 7 scale from far left to far right. Answers of 1 to 3 are classified as left-wing, 4 as centrist, and 5 to 7 as right-wing.

In 1986, when the survey was first conducted, 39% of Israeli Jewish voters defined themselves as right-wing, 25% as centrist and 23% as left-wing. In the survey for 1995, the year in which prime minister Yitzhak Rabin was assassinated, 36% defined themselves as left-wing, 29% as right-wing, and 28% as centrist. Anabi said the 1995 survey was taken shortly after the assassination, and marked the only year since 1986 when the left outscored the right.

Anabi said that each year, the political affiliation survey had between 750 to 1,200 respondents.

Despite having a growing right-wing ideological majority among Jewish citizens, Israeli politics have yet to stabilize around a solid four-year government. The right-religious bloc led by former prime minister Benjamin Netanyahu is polling most strongly, but the November 1 Knesset race is still predicted to end up indecisive.

While the majority of Israelis — 74%, according to Central Bureau of Statistics 2020 figures — are Jewish, Israel’s Arab minority — standing at 22% — also plays a significant role in political outcomes.

A Sunday poll by the Kan public broadcaster found that, should Israel’s two Arab political factions remain in their current constellations, the opposition-committed Joint List would take six seats, while Ra’am would have four to bargain into a coalition. The Joint List has never sat in an Israeli coalition and can be considered a third bloc taking seats off the table in the contest for control between Netanyahu and the alliance led by Prime Minister Yair Lapid.

The same poll found that Arab voter turnout may drop to an all-time low of 39% in anticipation of November, as Arab voters join the general Israeli electorate in election fatigue and their parties experience factious splits.

If Arab turnout significantly drops, or if one of the Joint List’s constituent parties splits off and burns votes, the number of seats held by this neutral bloc, neither right nor left, would dwindle and amplify the effect of Jewish voters, who currently prefer Netanyahu’s bloc.

Another key reason that a Jewish ideological majority has not translated into a stable political one is ongoing divisions among the ideological right about who should lead the bloc.

Among the self-identified right-wing Jewish voters in the 62% majority are people who are ideologically right-wing but support candidates who will not ally with Netanyahu, citing his ongoing corruption trial. Among these are voters for Gideon Sa’ar’s New Hope party, now merged with Benny Gantz’s Blue and White into a center-right alliance, and voters for Avigdor Liberman’s Yisrael Beytenu, which also forswears partnership with a prime minister Netanyahu.

A separate data set from IDI showed that 72% of Jewish voters for Yisrael Beytenu and 70% of New Hope voters in 2021 identified as right-wing, versus centrist or left-wing, which was a small minority — 3% and 2%, respectively.

The second data set was based on 3,855 interviews, according to Anabi.