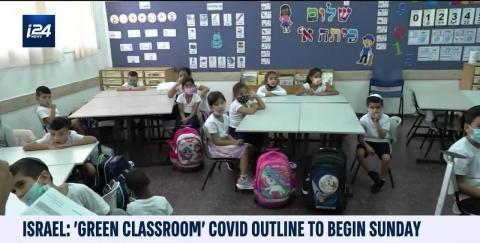 Select Jerusalem schools will be the first to pilot a new anti-COVID air filtration system, the municipality announced earlier this week. The Jerusalem educational institutions were selected by the Health and Education ministries to lead the study, which is meant to see if such systems reduce the spread of the virus in classrooms.

“The Jerusalem municipality is a pioneer again,” the ministry said in a statement.

During previous waves, when the weather became colder and windows had to be shut, children contracted the virus either as a result of droplets being sprayed by other students with whom they were in close contact or from the air - especially during prolonged stays in closed spaces.

There were 3,370 students and 178 faculty infected with the virus as of Friday, the Health Ministry reported. There were 23,636 students in isolation and 449 staff members.

The installation and control of the devices will be done by one of the five companies selected by the ministries for the trial, which are overseeing the whole experiment. A spokesperson for the municipality said she was unsure specifically which filters would be installed, though it stressed that the filtration systems have no risk.